EVERETT IS GROUND ZERO FOR PSCZ

EVERETT IS GROUND ZERO FOR PSCZ

If you grew up around Puget Sound, you've probably noticed it. Some days we're dry and sunny, while just a few miles away it's may be pouring rain in Snohomish County.

This Summer Seattle has experiences record-breaking hot and dry conditions, but come Springtime, one question comes up a lot.

Ted -- "Down in Seattle you see sunshine and you look to the north and you’re like ‘How can that be? Why could we be having rain just 35 miles away?,' asked longtime Meteorologist Ted Buehner, former Warning Coordination Meteorologist for the National Weather Service in Seattle.

The phenomenon Buehner is referring to as the Puget Sound convergence zone.

"I use an analogy like looking at a rock in a stream,' said Buehner. "The water goes around the rock and it meets on the backside. Well that’s exactly what happens with the Puget Sound Convergence Zone. 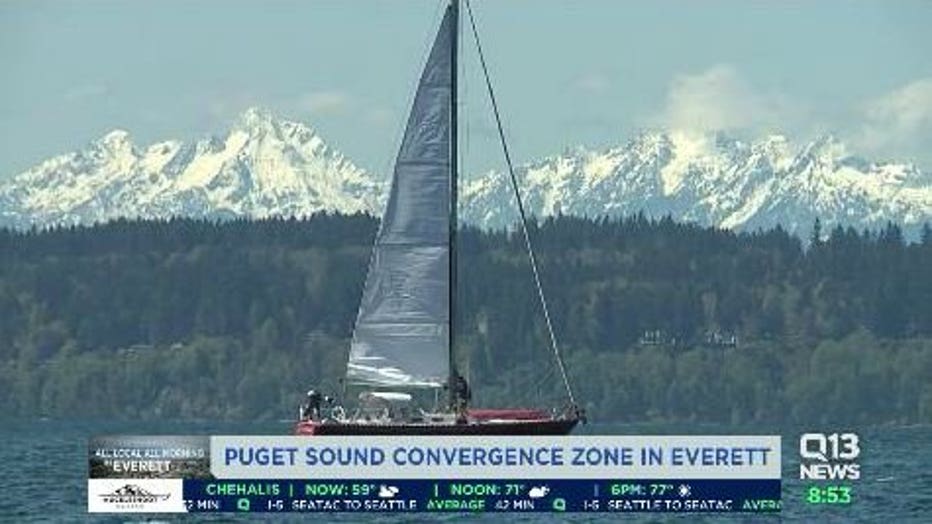 Here’s how it works.

"What happens is you get westerly flow in off the Pacific Ocean," said Buehner. "It goes around the Olympics, through the Strait of Juan de Fuca and what's called the 'Chehalis Gap' on the south side of the Olympics." 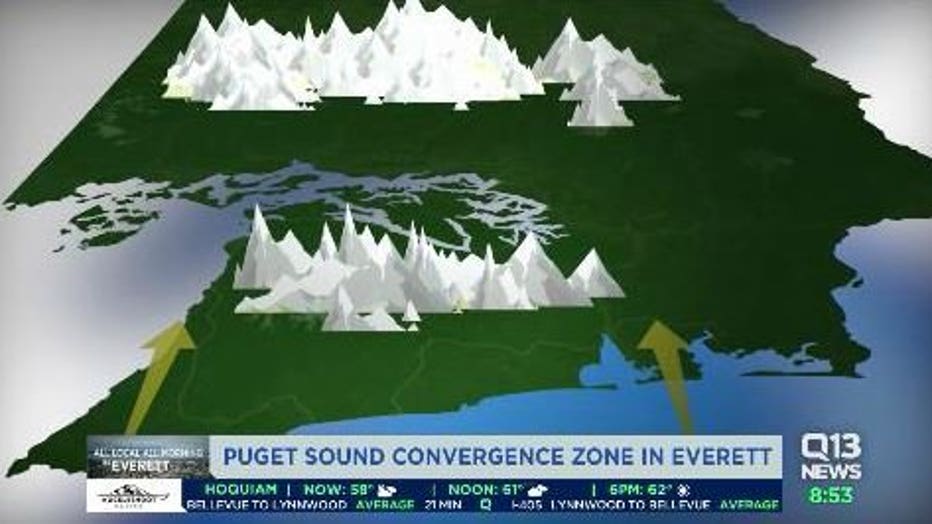 The winds then converge on the lee side of the Olympics. 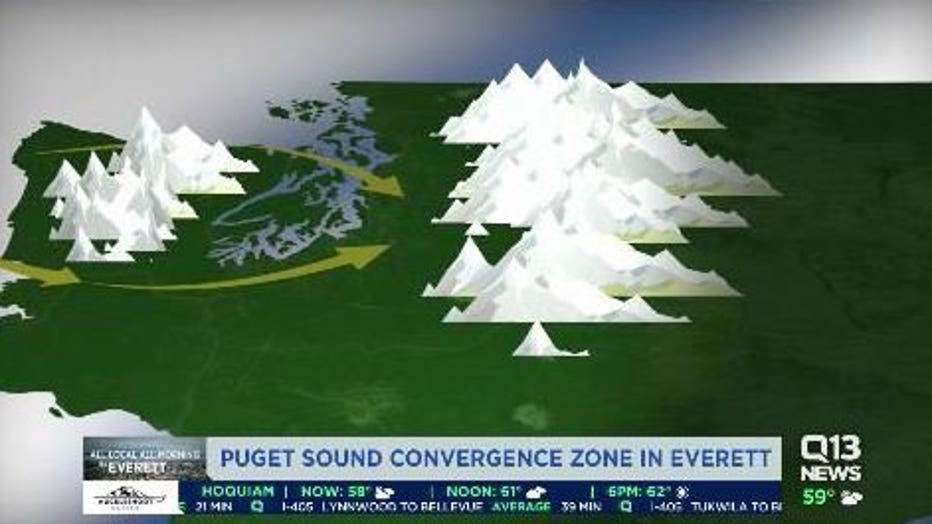 Eventually those winds collide right into the cascades.

"What do they hit? The Cascades. Bam! They can’t go past the Cascades. They can’t go through them, so they get channeled around and then the converge right over Everett, Snohomish County or down to Lynnwood, Alderwood--this area at the surface," said Q13 Morning Meteorologist M.J. McDermott pointing to a map in the weather center. "When they hit at the surface there’s no where for them to go except up." 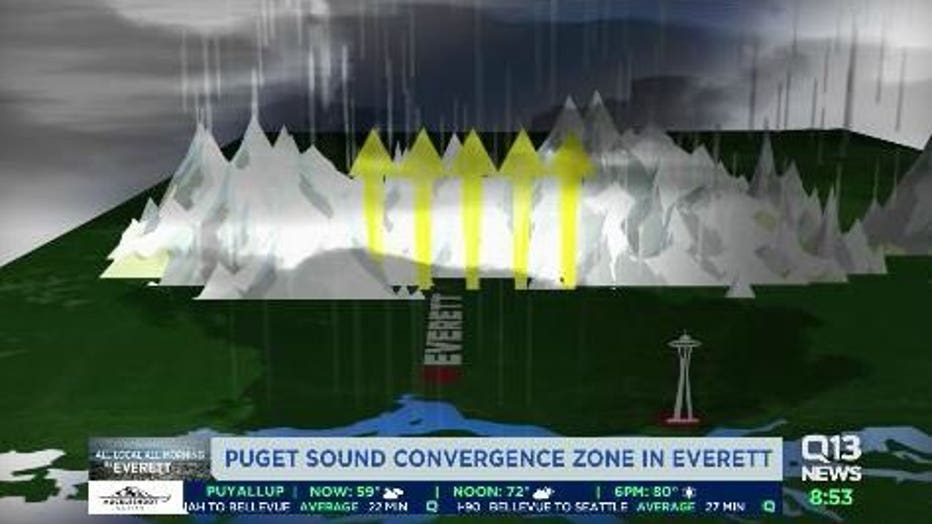 Creating rising air, that forms clouds and eventually rain--which is usually more intense right over Snohomish County. But we'll see descending air to the north and the south, creating much different weather for Everett's neighbors.

"You’ll tend to get sunny skies in Seattle and sunny skies up on Whidbey Island and you’re only about 15, 20, 25 miles away from the Convergence Zone in the middle," said Buehner. 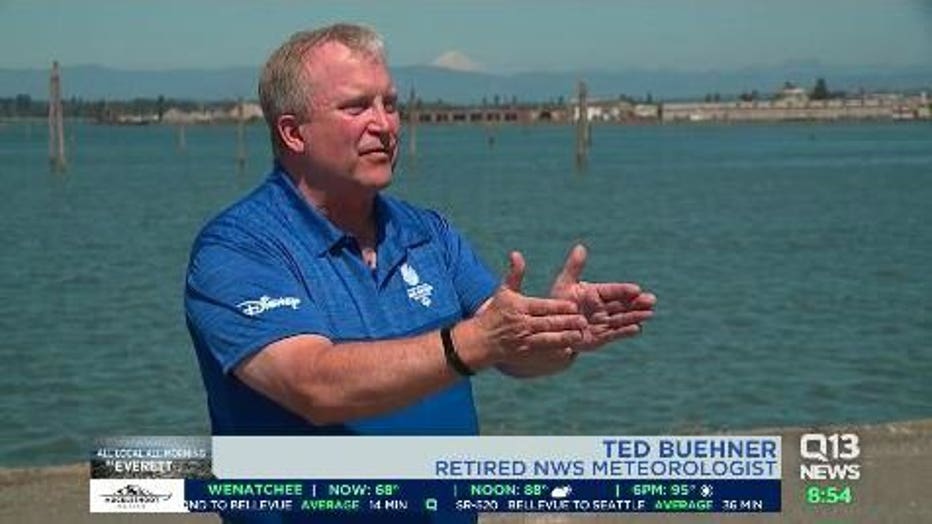 According to the National Weather Service, the phenomenon occurs regularly throughout the months of April and May and as technology has improved, so has forecasting for it.

"It's anytime we get those winds off the Northwest--which is pretty much anytime we get a cold front here in Western Washington," said McDermott. "So as soon as satellite and radar was discovered we started to realize there was this extra bit of rain falling right there and scientists were like ‘Why is that?’ and then they realized the dynamics of it." 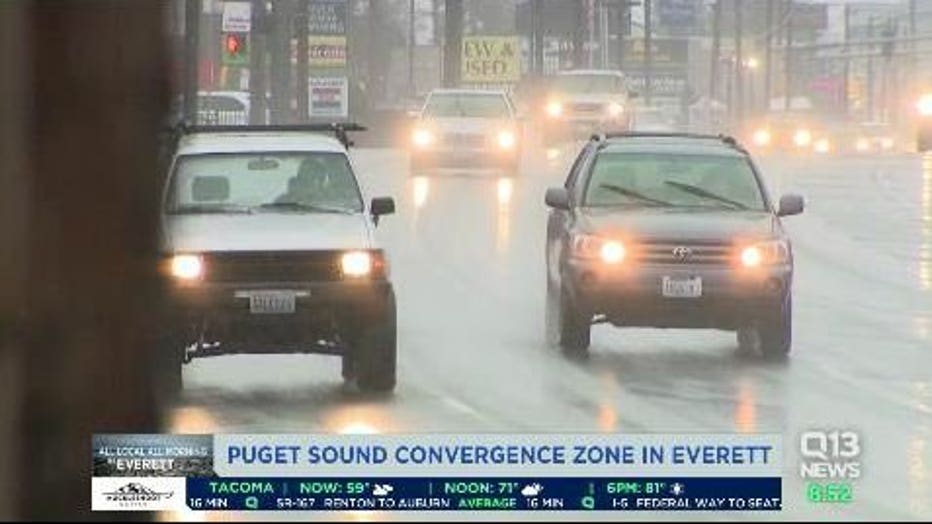 Dynamics which can produce increased rainfall or hail around Everett and sea level snow in the winter or early spring, often while neighboring cities are still soaking up sunshine.

"We had a Convergence Zone that formed in the middle of April but the air mass was cold enough and unstable enough that it snowed instead of rain," said Buehner. "There were some places in this area that had 6 inches of snow and only about 10 miles to the south it was just raining and 43 degrees."