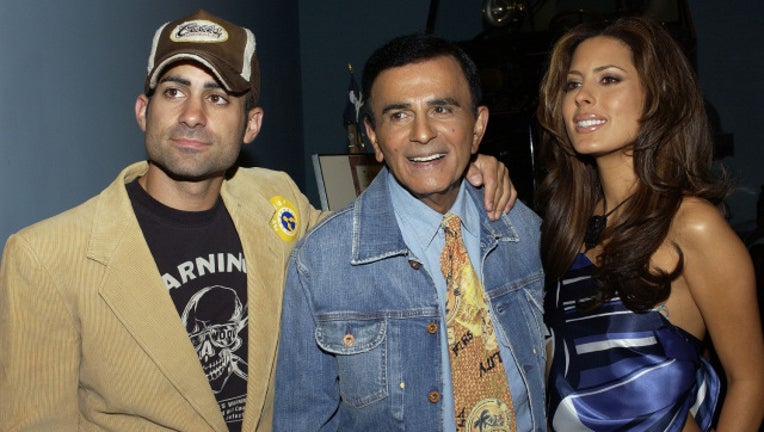 The 82-year-old, who is suffering from dementia, has been missing from California for days.

"We have received confirmation that Casey Kasem has been found in Washington state. The family has grave concerns about his medical care. The Kasem family will do everything in their power to bring their father home," Deraney said in a statement.

The statement did not say exactly where Kasem was found in the state or what his condition might be.

Deputy Scott Wilson with the Kitsap County Sheriff's Office confirms that Kasem had been found in good condition in Kitsap County, where he and his wife, Jean, were visiting friends.

Wilson said that the sheriff's office had received a request on Tuesday from Adult Protective Services in California through Washington's Department of Social and Health Services to see if Kasem was at an address somewhere in Kitsap County.  Wilson declined to give an address due to privacy reasons.

Wilson said deputies spoke with Kasem on Tuesday, and that he was aware of where he was, and seemed cognizant. Deputies passed on information to DSHA, but let Kasem stay at the Kitsap County home.

Kasem's daughter Kerri issued a statement late Wednesday night that read, "We are grateful to the local authorities for finding my Dad. We are one step closer to bringing him home."

His estranged wife has been battling with his children over who should be the conservator of the former DJ.

On Monday, Los Angeles Super Court Judge Daniel Murphy had ordered authorities to find Kasem after Kasem’s wife’s lawyer said he did not know the whereabouts of the 82-year-old.

"Justice was finally served! I just won temporary conservatorship over my father's health care. We have been vindicated by the court. Thank you for your prayers, well wishes and support through this entire ordeal," Kasem's daughter, Kerri Kasem, posted on her Facebook page soon after the order.

Later, she added: "I believe my father's wife fled the country (or possibly went to an Indian reservation) with my Dad because she knew I would win in court today. The judge ordered Adult Protective Services, the PVP attorney and the police to look for him. Please pray that he is safe."

A different judge denied a request by Kasem's children that a temporary conservator be appointed for their father last year.

Kasem's daughter Julie Kasem and her husband filed that earlier conservatorship petition, claiming the retired radio host "has been isolated from his daughters, friends and other family" by his wife.

That judge ruled last year that Kasem was being well cared for by his wife, Jean Kasem.

The petition last year claimed that daughter Julie Kasem and her husband, Dr. Jamil Aboulhosn, had been unable to check on Kasem's health even though her father signed papers in 2007 giving them the power of attorney over his heath care in the event he was unable to make his own health decisions.

They "have been prevented from exercising their duties" by Jean Kasem, who has been married to the retired radio host for three decades, the filing argued.

"There is no communication between Jean and us and his daughters," said brother Mouner Kasem. "We have no knowledge of how he is, what he's doing, if he's better, if he's worse, and we're scared that we'll never see him again."

Last year, Kerri Kasem said that her stepmother suddenly barred her sister, her uncle and some of Kasem's friends from seeing him. She said she was perplexed by the decision.

Kasem, who for decades hosted radio music countdown shows "American Top 40" and "Casey's Top 40," is suffering from Parkinson's disease and "may have early onset Parkinson's dementia," according to a court filing. He retired in 2009.

Besides the famed countdown shows, Kasem was also the voice of Shaggy in the cartoon "Scooby Doo" and an announcer for NBC. He was a popular DJ and occasional actor before "American Top 40" began in 1970.