We're getting a first look at some data from a trial program hoping to slow down shipping traffic in Puget Sound. The goal: reduce stress on endangered southern resident killer whales.

SEATTLE - A pilot program running in Puget Sound has slowed 61-percent of commercial vessels in the past month. The program, which is voluntary, is the latest effort to reduce noise pollution that harms the endangered Southern Resident killer whales.

At last count, the Southern Resident killer whales numbers have dwindled to 73 individuals.

"There’s plenty of room to grow from here, I think we’re learning all the time how we can improve our communications," said Rachel Aronson, who leads up the ‘Quiet Sound’ program.

The Southern Resident killer whales numbers have dwindled to 73 individuals. Over the past several years, the state of Washington has been focusing on ways to prevent the species’ extinction.

In 2018, the governor created the Southern Resident Orca Task Force – ultimately the group gave dozens of recommendations on how to deal with the major issues facing the species: food scarcity, pollution and noise.

The ‘Quiet Sound’ program aims to lower the volume underwater in Puget Sound – addressing a major problem for Southern Resident killer whales: there is too little food for them to eat, while their favored hunting grounds are contaminated by noise pollution.

By asking commercial vessels to slow-down, they can reduce the volume of noise while orcas are hunting for salmon.

Research has even shown that some orcas will simply give up hunting when it’s too noisy for them – killer whales use echolocation to navigate, so loud noises make it hard for them to eat.

While 61-percent participation may be lower than some are hoping for, Aronson told dignitaries at a special event on Friday that the numbers mirror those witnessed by Canadian authorities that rolled out a similar program roughly 6 years ago. Since then, their participation rate has surpassed 90-percent.

The ‘Quiet Sound’ program is being run in Admiralty Inlet and north Puget Sound. Transition zones include the Port Townsend-Coupeville route, Possession Sound, and the Edmonds-Kingston route. 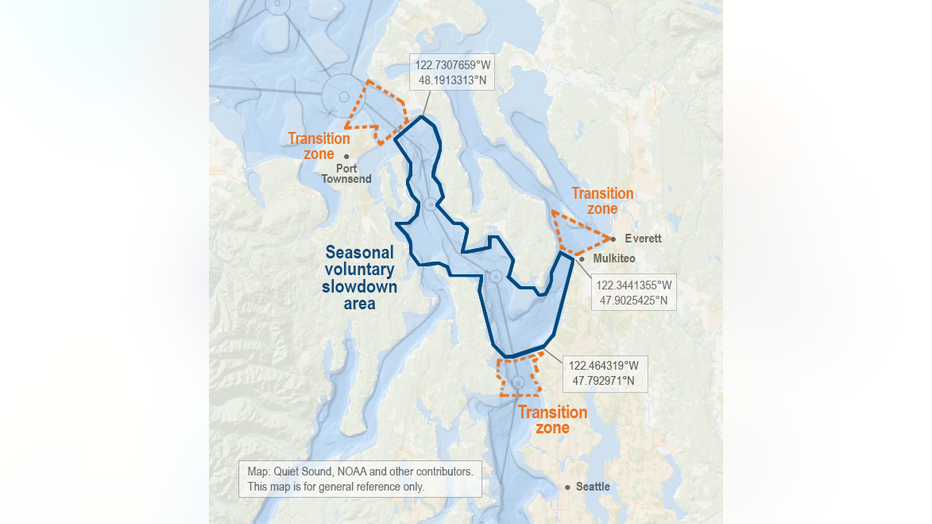 Cruise ships, container vessels and vehicle carriers are encourages to slow to 14.5 knots, while bulkers and tankers are being asked to slower to 11 knots when in the depicted zone. The end result is expected to add 10- to 20-minutes to travel times.