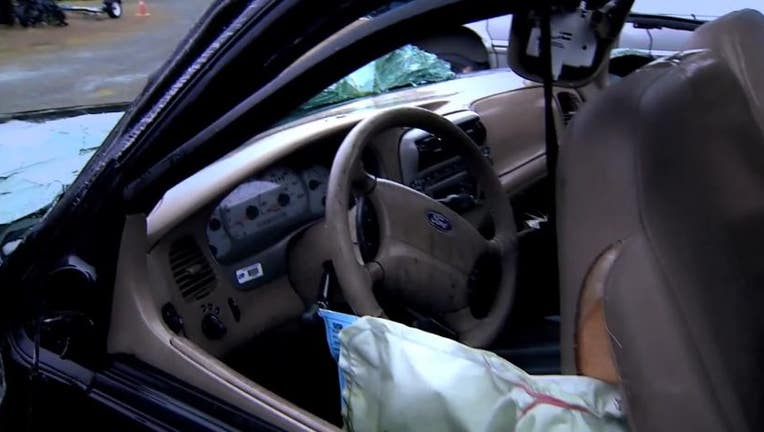 “The last text message I got was three hours before the accident and it said, ‘Can I come by’?” said Statezni.

That night Zachary was hanging out with friends.  His mom admits he was drinking.

“There were so many bad choices made that night,” said Statezni.

Police say Zachary’s friend was behind the wheel in Graham, going more than 100 mph.  Zachary was in the back seat and the only one not buckled in.

“I was in bed and I could hear metal crumpling and glass breaking,” said neighbor Lori Jeffries.

Jeffries rushed outside and found Zachary lying in her flower bed.  He’s been thrown from the car.

“I felt for his pulse; there was no pulse.  I knew he was gone,” said Jeffries.

An examination of the car Zachary was riding in that night reveals a far too common scenario.  Although the Dodge Neon rolled over, the passenger compartment wasn’t crushed.  Zachary had ‘room to live’.

“It’s such a tragedy that all someone had to do was click a seat belt and that could have been prevented,” said Washington State Patrol  trooper Guy Gill.

“It’s taken months to come to term with the fact if he had been (buckled in), he quite possibly would have survived,” said Sonya Statezni.

What is ‘room to live’?  Cars are now built with survival in mind.  The front and rear ‘crumple zones’ absorb the impact and the cabin or ‘cage’ is reinforced to stay intact.  During a rollover the windshield will typically shatter and the doors may bend in, but the driver and passengers are left with ‘room to live’.

“Think of a front loader washing machine or dryer; you see that thing spinning around, the clothes in there tumbling around.  Someone in a vehicle can roll around just like that and if they’re not buckled in they can go out any opening.  It could be the sunroof, windshield or windows,” said Gill.

A seatbelt meant the difference between life and death for Nicholas Lang of Yakima.

“The coma was about a full month and a half.  I suffered a traumatic brain injury on both sides,” said Lang.

“The front grill of the pickup that hit us made direct contact to my left temple and shattered my skull,” said Lang.  “It was so obvious that if either of us was not buckled up, it would have been a fatal accident.”

It only takes a second.  The absence of that one simple act by her son Zachary last summer is something Sonya still struggles with today.

“It’s just so hard. I don’t want anyone else to be going through this because it’s forever,” said Statezni.

Zachary had room to live if he had only made the choice.

“The truth of it is Zachary is gone.  He died.  If I can encourage anybody, please listen to me now.  Wear a seatbelt,” said Statezni.