Puyallup Police are investigating an officer involved shooting. The suspects were trying to break in to a business when the officer tried to stop them.

PUYALLUP, Wash. - Puyallup police are asking for the public's help to find a black 2003-2007 Chevrolet Silverado believed to have been driven by a second suspect in the shooting of an off-duty officer attempting to stop a burglary.

Several hours after putting out a notification for locals to be on the lookout for a silver 2005 Chevrolet Silverado, Puyallup police were able to locate the vehicle. It is strongly suspected that the stolen silver truck is the vehicle involved in the shooting of an off-duty Federal Way Police officer on Sunday who was out on a morning run. The black, cross-bed toolbox seen in the photos of the silver truck is no longer on the vehicle.

It's unclear if anyone was arrested upon the discovery of the truck.

The Puyallup Police Department is asking for the public’s assistance with any information about this case, to include the whereabouts of either of the involved vehicles. Citizens are cautioned to not approach either vehicle or suspects and are asked to call 911 if either vehicle is believed to have been located. Other information about the case may be forwarded to the Puyallup Police Department via the Tip Line at 253-770-3343 or tips@puyallupwa.gov. 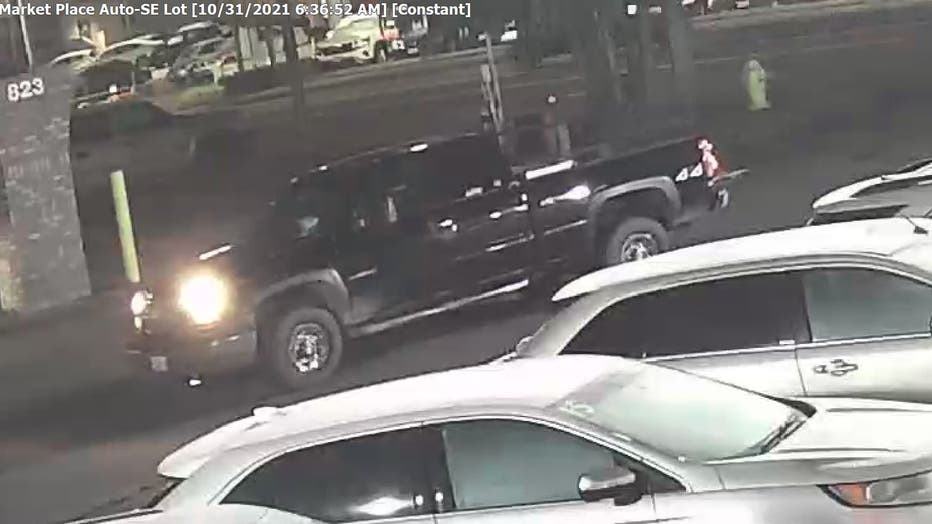 Chief Scott Engle says a burglary suspect inside the Chevy pickup truck shot an off-duty Federal Way PD officer. Officer Donovan Heavener was out for his morning run when he came across the suspects trying to break into Jennings Equipment at 11 ST NW and River RD just after 7 a.m. Officer Heavener was shot as he was standing on the sidewalk from someone inside the Chevy truck as it fled the scene. 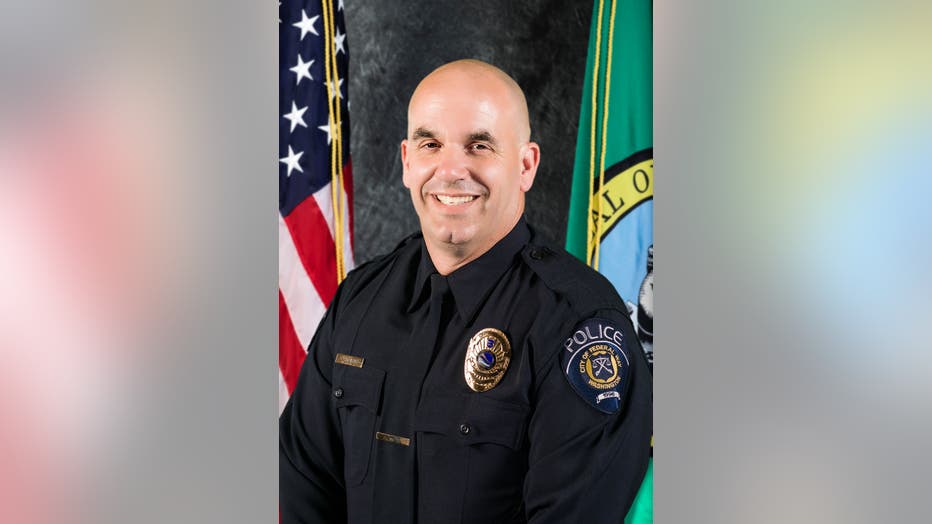 Federal Way PD Officer Donovan Heavener was shot in Puyallup while on his morning run.

Puyallup officers arrived immediately, began life-saving efforts. He was taken to Tacoma General hospital where he has undergone surgery and is now out of surgery and is expected to survive. His injuries are very serious. Tacoma Police are providing a security detail.  "The Federal Way Police Department would like to thank all those that have sent kind words, prayers and assistance during this critical time," said Federal Way PD Chief Andy Hwang. 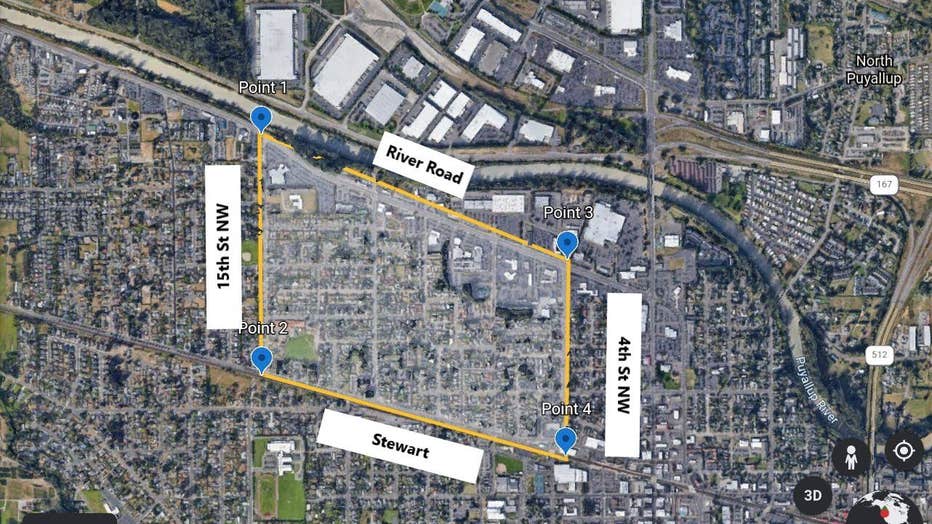 Detectives are asking residents and business owners to check their Ring cameras and surveillance cameras in the area of 13th St. NW and 8th Ave NW. If you live within the boundaries of this map in Puyallup, please check your home video equipment to s

Detectives say the shooter's truck went eastbound on River Rd to N. Meridian where it turned and went south on N. Meridian into our downtown core area of our city.

"The Puyallup Police Department has determined that our suspects are Hispanic, were speaking Spanish and had been in the area of our city in the area of 8th Ave NW and 13th St NW just prior to the incident. Some citizens observed them there. These subjects appeared to have left that area of that city and then come to the business for the burglary," said Chief Engle.

Detectives are asking residents and business owners to check their Ring cameras and surveillance cameras in the area of 13th St. NW and 8th Ave NW.

If you know anything about this incident or the trucks involved, please call the Puyallup PD tipline at 253.770.3343 or email tips@puyallupwa.gov.

If you wish to remain anonymous, you can submit a tip to Crime Stoppers of Tacoma-Pierce County through the P3 Tips App on your cell phone or call 1-800-222-TIPS (8477). There is a cash reward offered of up to $1,000 for information that leads to an arrest in the case.

In addition to his 27 years in law enforcement, Officer Heavener is also the State Director for the Washington Law Enforcement Torch Run for Special Olympics Washington and oversees more than 2,000 officers who participate in the event, bringing public awareness and raising nearly half a million dollars a year for this worthy cause. He and his team from Federal Way PD are great sports at the annual Polar Plunge in Tacoma to raise money for the athletes. His Penguin costume in 2018 was a huge hit.  His work for the athletes shows his compassion for the community and the good heart behind his badge. 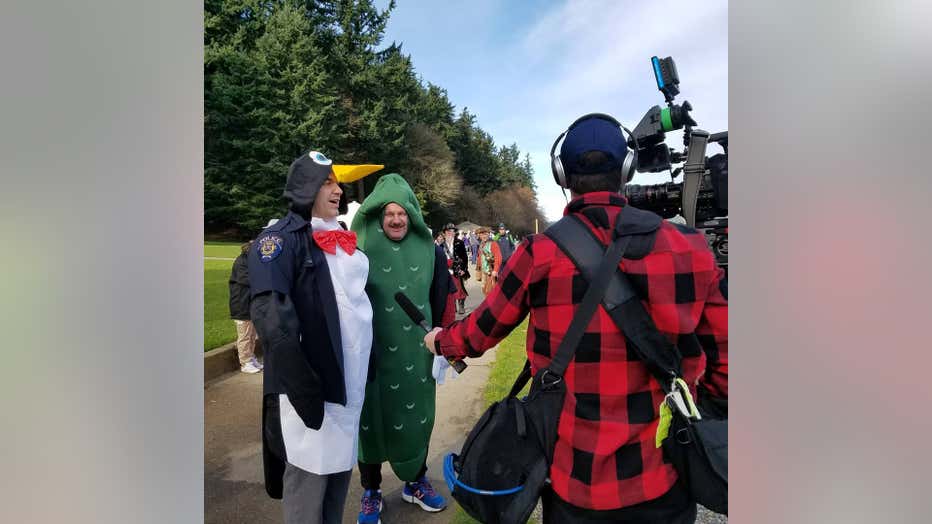 ‘We love Donovan and are so grateful for his dedication and support of the athletes and the community. We are sending Donovan , his family and all of our law enforcement officers love and light during this time," said Mary Do, Chief Operating Officer at Special Olympics Washington.