One non-profit organization is providing urgent medical supplies and prosthetics to Ukrainian refugees and war victims. LiveNOW from FOX talks with Courage Ukraine about the life-changing work they are doing.

KYIV, Ukraine - Russia took aim at Western military supplies for Ukraine with airstrikes in Kyiv on Sunday that it said destroyed tanks donated from abroad, as President Vladimir Putin warned that any Western deliveries of long-range rocket systems to Ukraine would prompt Moscow to hit "objects that we haven't yet struck."

The cryptic threat of a military escalation from the Russian leader didn't specify what the new targets might be, but it comes days after the United States announced plans to deliver $700 million of security assistance for Ukraine that includes four precision-guided, medium-range rocket systems, helicopters, Javelin anti-tank weapon systems, radars, tactical vehicles, spare parts and more.

Military analysts say Russia is hoping to overrun the embattled eastern Donbas region, where Russia-backed separatists have fought the Ukrainian government for years, before any weapons that might turn the tide arrive. The Pentagon said earlier this week it will take at least three weeks to get the precision U.S. weapons and trained troops onto the battlefield.

Russian forces pounded railway facilities and other infrastructure early Sunday in Kyiv, which had previously seen weeks of eerie calm. Ukraine's nuclear plant operator, Energoatom, said one cruise missile buzzed the Pivdennoukrainsk nuclear plant, about 350 kilometers (220 miles) to the south, on its way to the capital — citing the dangers of such a near miss. 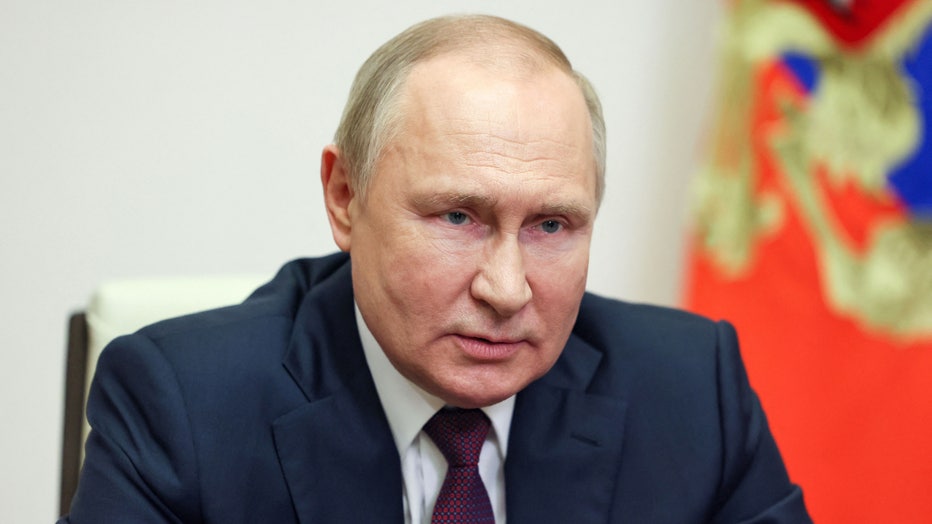 Russian President Vladimir Putin delivers an address to the participants of the Bolshaya Peremena All-Russian contest for school students via a video link at the Novo-Ogaryovo state residence, outside Moscow, on June 1, 2022. (Photo by MIKHAIL METZEL

There was no immediate confirmation from Ukraine that the Russian airstrikes had destroyed tanks.

Kyiv hadn’t faced any such strikes since the April 28 visit of U.N. Secretary-General António Guterres. The early morning attack triggered air raid alarms and showed that Russia still had the capability and willingness to hit at Ukraine’s heart since abandoning its wider offensive across the country to instead focus its efforts in the east.

RELATED: At 100 days, Russia-Ukraine war explained by the numbers

In a posting on the Telegram app, the Russian Defense Ministry said high-precision, long-range air-launched missiles were used. It said the strikes on the outskirts of Kyiv destroyed T-72 tanks supplied by Eastern European countries and other armored vehicles located in buildings of a car-repair business.

Russia's invasion of Ukraine on Feb. 24 has led to untold tens of thousands of civilian and troop deaths, driven millions from their homes, sparked vast sanctions against Putin's government and allies, and strangled exports of critical wheat and other grains from Ukraine through Black Sea ports — limiting access to bread and other products in Africa, the Middle East and beyond.

Putin lashes out at West

In a television interview on Sunday, Putin lashed out at Western deliveries of weapons to Ukraine, saying they aim to prolong the conflict.

"All this fuss around additional deliveries of weapons, in my opinion, has only one goal: To drag out the armed conflict as much as possible," Putin said, alluding to U.S. plans to supply multiple launch rocket systems to Kyiv. He insisted such supplies were unlikely to change much for the Ukrainian government, which he said was merely making up for losses of rockets of similar range that they already had.

If Kyiv gets longer-range rockets, he added, Moscow will "draw appropriate conclusions and use our means of destruction, which we have plenty of, in order to strike at those objects that we haven't yet struck." 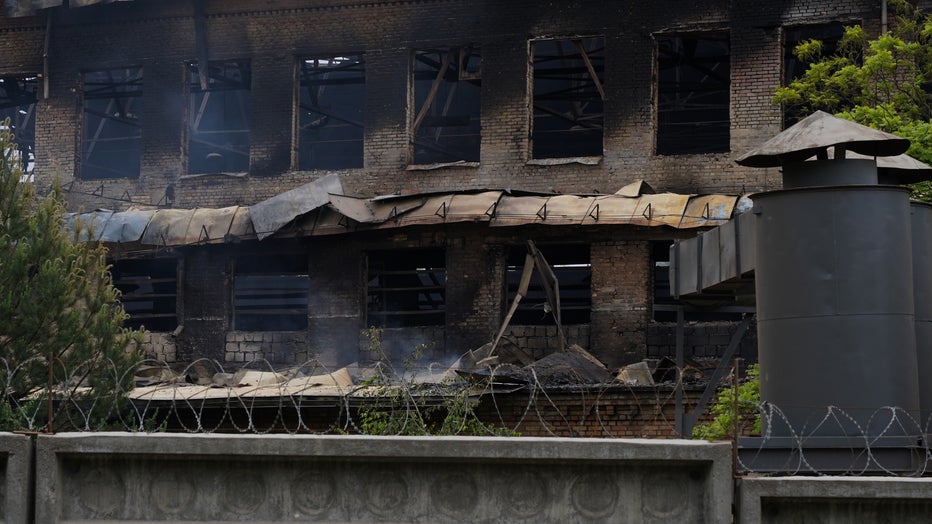 KYIV, UKRAINE - JUNE 5: A view of a building in the Darnitsky district heavily damaged after the Russian forces have reportedly carried out missile attacks on Ukraine's capital Kyiv's eastern districts of Dniprovsko and Darnitsky at 6:00 am local tim

In recent days, Russian forces have focused on capturing the city of Sievierodonetsk.

A billowing pillar of smoke filled the air with an acrid odor in Kyiv's eastern Darnystki district, and the charred, blackened wreckage of a warehouse-type structure was smoldering. Police near the site told an Associated Press reporter that military authorities had banned the taking of images. Soldiers also blocked off a road in a nearby area leading toward a large railway yard.

The sites struck included facilities for the state rail company, Ukrzaliznytsia, said Serhiy Leshchenko, an adviser in President Volodymyr Zelenskyy’s office, on Telegram. The cruise missiles appeared to have been launched from a Tu-95 bomber flying over the Caspian Sea, the Air Force Command said on Facebook. It said air defense units shot down one missile.

Energoatom said one cruise missile came dangerously close to the Pivdennoukrainsk nuclear power plant. It said the missile "flew critically low" and that Russian forces "still do not understand that even the smallest fragment of a missile that can hit a working power unit can cause a nuclear catastrophe and radiation leak."

Elsewhere, Russian forces continued their push to take ground in eastern Ukraine, with missile and airstrikes carried out on cities and villages of the Luhansk region, with the war now past the 100-day mark.

Luhansk governor Serhiy Haidai said on Telegram that "airstrikes by Russian Ka-52 helicopters were carried out in the areas of Girske and Myrna Dolyna, by Su-25 aircraft - on Ustynivka," while Lysychansk was hit by a missile from the Tochka-U complex.

A total of 13 houses were damaged in Girske, and five in Lysychansk. Another airstrike was reported in the eastern city of Kramatorsk by its mayor Oleksandr Goncharenko. No one was killed in the attack, he said, but two of the city’s enterprises sustained "significant damage."

On Sunday morning, Ukraine’s General Staff accused Russian forces of using phosphorus munitions in the village of Cherkaski Tyshky in the Kharkiv region. The claim couldn’t be independently verified.

The update also confirmed strikes on Kyiv, which occurred in the early hours of Sunday. It wasn’t immediately clear from the statement which infrastructure facilities in Kyiv were hit. 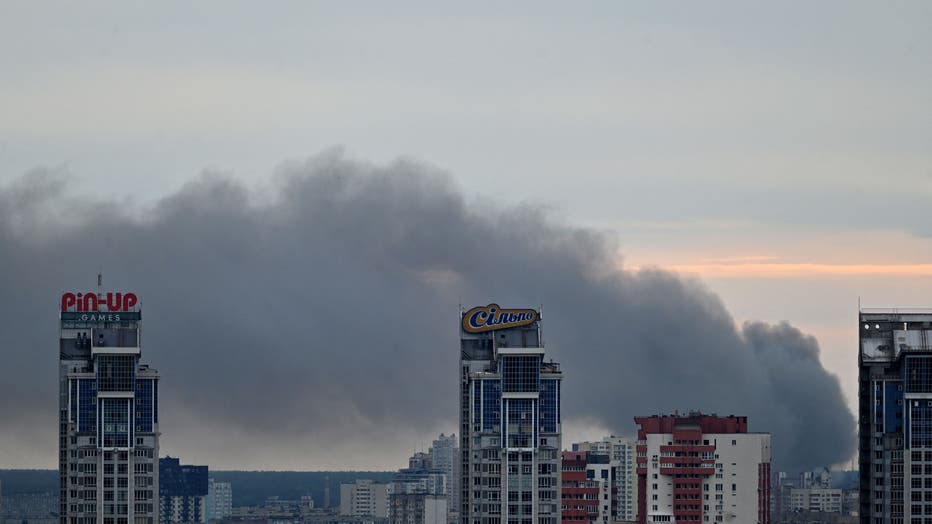 The General Staff said Russian forces continue assault operations in Sievierodonetsk, one of two key cities left to be captured in the Luhansk region of the Donbas. The Russians control the eastern part of the city, the update said, and are focusing on trying to encircle Ukrainian forces in the area and "blocking off main logistical routes."

The statement also said Russia’s military was partly relying on reserve forces of the separatists in the Luhansk region.

"These troops are poorly equipped and trained, and lack heavy equipment in comparison to regular Russian units," the intelligence update said, adding that "this approach likely indicates a desire to limit casualties suffered by regular Russian forces."

Far from the battlefield, Ukraine's national soccer players are hoping to secure a World Cup spot when the team takes on Wales later Sunday in Cardiff.

On the diplomatic front, Russian Foreign Minister Sergey Lavrov was heading to Serbia for talks with President Aleksandar Vucic early this week, followed by a visit to Turkey on Tuesday, where the Russian envoy is expected to discuss Ukraine with his Turkish counterpart.

Turkey has been trying to work with U.N. and the warring countries to help clear the way for Ukrainian grain to be exported to Turkish ports, though no deal on the issue appeared imminent.

Mykhailo Podolyak referenced remarks Friday by French President Emmanuel Macron, who said Putin had made a "historic error" by invading Ukraine, but that world powers shouldn’t "humiliate Russia" so that a diplomatic exit could be found when the fighting stops.

Ukrainian authorities said Ukraine and Russia had exchanged bodies of killed troops this week, in the first officially confirmed swap. Ukraine’s Ministry for Reintegration of Occupied Territories said Saturday each side had exchanged 160 bodies Thursday on the front line in the southern Zaporizhzhia region, parts of which are under Russian control. Russian officials haven’t commented on the exchange.

At the Vatican, Pope Francis made one of his strongest appeals for a cease-fire and peace negotiations in Ukraine, urging leaders: "Don’t bring the world to ruins, please. Don’t bring the world to ruins." He made the plea during his traditional Sunday blessing from a window overlooking St. Peter’s Square, asking leaders to hear "the desperate cries of the people who suffer" more than 100 days after the Russian invasion.