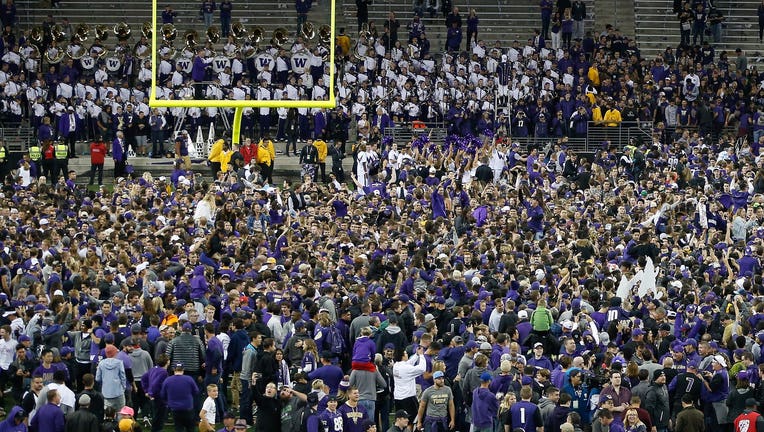 SEATTLE (AP) — Jake Browning threw for 210 yards and three touchdowns, Myles Gaskin added 100 yards and two scores, and No. 10 Washington was dominant on both sides, overwhelming No. 7 Stanford 44-6 on Friday night.


After months of hype that Washington (5-0, 2-0 Pac-12) was on the verge of a breakout, the Huskies showed they were ready for their return to the national stage.

The Huskies raced to a 23-0 halftime lead, scored early in the second half to go up 30-0 and coasted to their biggest victory over an AP Top 10 team since beating No. 5 Southern California 31-0 in 1990. That game 26 years ago announced Washington as a national contender and the Huskies went on to share the national title a year later with Miami — taking the coaches' version while Miami topped the AP media poll.

Browning was the leader of an efficient offense that scored on six of its eight drives. He threw touchdowns of 3 yards to Dante Pettis, 19 yards to John Ross and capped the night with a 3-yarder to Aaron Fuller with 5:30 remaining. Browning was 15 of 21 and did not commit a turnover.

Equally important was Washington's ability to establish a running game. The Huskies rushed for 214 yards and averaged 5.2 yards per carry.

It was McCaffrey's fewest yards rushing since 2014 at California when he had 19 yards on three carries.

Stanford's only TD came late in the third quarter on a 19-yard pass from Ryan Burns to J.J. Arcega-Whiteside.

Burns was 15 of 22 for 151 yards, but Washington controlled the line of scrimmage on both sides. Stanford quarterbacks were sacked eight times, six in the first half. Stanford had allowed only four total sacks in the first three games combined.

Stanford: The Cardinal were unexpectedly sloppy. Stanford committed 11 penalties after entering the week as the least penalized team in the Pac-12. There were communication issues in part due to the roaring Washington crowd, but also a lack of sharpness not normally seen from David Shaw's team.

Washington: The defense was up to the task of keeping McCaffrey under control and forcing Burns to beat them through the air. McCaffrey had 34 yards on 10 carries in the first half and forced the Cardinal into numerous long third-down situations. That allowed Washington to bring extra pass rushers to get to Burns.

Stanford: The Cardinal head home after two straight weeks on the road to host Washington State.

Washington: The Huskies travel to Oregon looking to snap a 12-game losing streak to the Ducks.