Proud Boys' leader Enrique Tarrio has been arrested in D.C., according to police.

FOX 5 's Evan Lambert reports Tarrio is facing misdemeanor destruction of property charges in relation to him saying he burned a Black Lives Matter flag that was stolen from a Black church in December during a protest in the District.

Concern for violence ahead of pro-Trump protests in DC

Stay home -- that is the main message from D.C. officials to our region as the District prepares to receive thousands of pro-Trump protesters on and before the day Congress will vote to certify the election. District leaders are taking a hands on deck approach.

He has been charged with Destruction of Property related to an offense that occurred on Saturday, Dec. 12, 2020, in the 900 block of 11th Street, Northwest.

Police say at the time of his arrest, Tarrio was found to be in possession of two high capacity firearm magazines. He has been additionally charged with Possession of High Capacity Feeding Device. 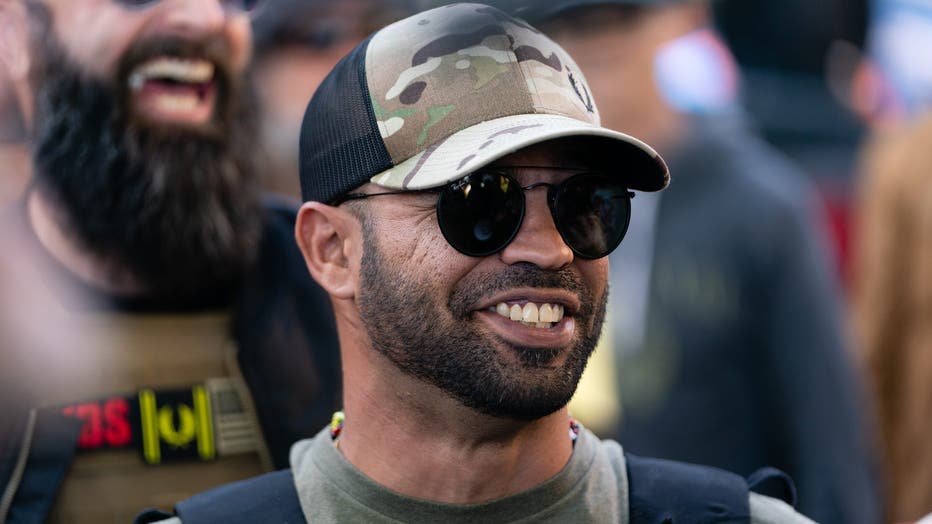 ATLANTA, GA - NOVEMBER 18: Enrique Tarrio, leader of the Proud Boys, a far-right group, is seen at a "Stop the Steal" rally against the results of the U.S. Presidential election outside the Georgia State Capitol on November 18, 2020 in Atlanta, Georg

Earlier on Monday, the Metropolitan African Methodist Episcopal Church in D.C. filed a lawsuit against the Proud Boys and Tarrio alleging that the group scaled its fence and tore down a large Black Lives Matter sign on display.

It was one of two historically Black churches that were vandalized during the protests.

Protests by pro-Trump groups, including the Proud Boys, are scheduled for the Nation's Capital this week, prompting an all-hands-on-deck response from the District government.

"White supremacists like the Proud Boys, would rather see the country burn than to see it united together under justice and freedom for all," said Kristen Clarke, president and executive director of the Lawyers’ Committee for Civil Rights Under Law. "Black churches and other religious institutions have a long and ugly history of being targeted by white supremacists in racist and violent attacks meant to intimidate and create fear. Our lawsuit aims to hold those who engage in such action accountable. We are proud to represent Metropolitan A.M.E. which has a long history of standing against bigotry and hate and whose courage and determination to fight back is a beacon of hope for the community."

WATCH FOX 5 DC FOR THE LATEST