ST. LOUIS (AP) — A white former police officer was acquitted Friday in the 2011 death of a black man who was fatally shot following a high-speed chase, and hundreds of demonstrators streamed into the streets of downtown St. Louis to protest the verdict that had stirred fears of civil unrest for weeks.

Ahead of the acquittal, activists had threatened civil disobedience if Jason Stockley were not convicted, including possible efforts to shut down highways. Barricades went up last month around police headquarters, the courthouse where the trial was held and other potential protest sites. Protesters were marching within hours of the decision.

By Friday evening, 13 arrests had been made and four officers hurt. One officer's hand was injured and another was pinned by a bike. A third was hit by a bike, and a fourth struck by a water bottle.

St. Louis police say two officers have been taken to the hospital with injuries sustained from thrown bricks during protests in the Central West End district of St. Louis.

The department announced in a tweet that one officer had a serious injury from a brick thrown at Kingshighway and Waterman, then five minutes later said a second was headed to the hospital as well. No other information was immediately released.

Protesters broke a window and splattered paint on Mayor Lyda Krewson's house. Police in riot gear responded, moved the crowd away from the house and eventually broke up the group with tear gas. Later, at least two armored vehicles were deployed.

Several dozen more officers with shields and full riot gear later arrived and forced the protesters down the street toward another equally large group of police in full riot gear. One man resisted and was arrested.

Shortly before the window was broken one of the protesters said over a bullhorn, "we think we have the right house."

The protests began Friday morning after a white former St. Louis officer was found not guilty of first-degree murder in the shooting death of a black suspect. 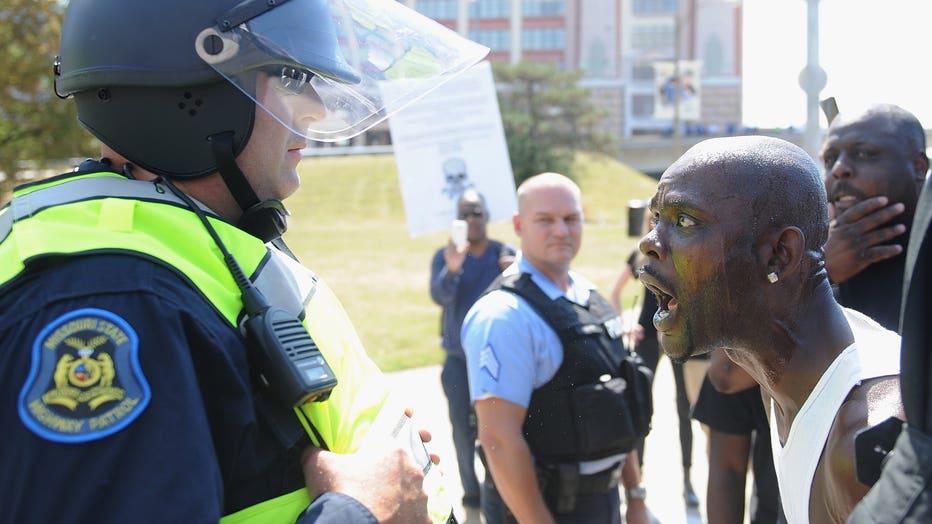 A man yells at a law enforcement officer during a protest action following a not guilty verdict on September 15, 2017 in St. Louis, Missouri. Protests erupted today following the acquittal of former St. Louis police officer Jason Stockley, who was ch

The case played out not far from the suburb of Ferguson, Missouri, which was the scene of the fatal shooting of Michael Brown, the unarmed black 18-year-old who was killed by a white police officer in 2014. That officer was never charged and eventually resigned.

Stockley, who was charged with first-degree murder, insisted he saw Anthony Lamar Smith holding a gun and felt he was in imminent danger. Prosecutors said the officer planted a gun in Smith's car after the shooting. The officer asked the case to be decided by a judge instead of a jury.

The judge declared that he would not be swayed by "partisan interests, public clamor or fear of criticism."

Assistant Circuit Attorney Robert Steele emphasized during the trial that police dashcam video of the chase captured Stockley saying he was "going to kill this (expletive), don't you know it."

Less than a minute later, the officer shot Smith five times. Stockley's lawyer dismissed the comment as "human emotions" uttered during a dangerous police pursuit. The judge wrote that the statement "can be ambiguous depending on the context."

Prosecutors objected to the officer's request for a bench trial. The Constitution guarantees the right of criminal suspects to have their cases heard "by an impartial jury." But defendants can also opt to have the verdict rendered by a judge.

Stockley, 36, could have been sentenced to up to life in prison without parole. He left the St. Louis police force in 2013 and moved to Houston.

The case was among several in recent years in which a white officer killed a black suspect. Officers were acquitted in recent police shooting trials in Minnesota, Oklahoma and Wisconsin. A case in Ohio twice ended with hung juries, and prosecutors have decided not to seek a third trial.

"It's a sad day in St. Louis, and it's a sad day to be an American," the Rev. Clinton Stancil, a protest leader, said regarding the acquittal.

Fears of unrest in St. Louis prompted several downtown businesses and some schools to close early.

The crowd of protesters included blacks, whites and other races. Some people carried guns, which state law allows.

Efforts at civil disobedience were largely unsuccessful. When several demonstrators tried to rush onto Interstate 64, they were blocked on an entrance ramp by police cars and officers on bikes. When they tried to enter the city's convention center, the doors were locked.

At times, things escalated. Earlier in the day, protesters stood in front of a bus filled with officers in riot gear, blocking it from moving forward. When officers began pushing back the crowd, protesters resisted and police responded with pepper spray. Later, protesters surrounded a police vehicle and damaged it with rocks. Some in the crowd threw rocks and pieces of curbing at police who tried to secure the vehicle. That led to officers using pepper spray again.

As night came, hundreds of protesters moved to St. Louis' upscale Central West End section, where they marched and chanted as people looked on from restaurants and hospital windows lining busy Kingshighway. The group tried marching onto I-64 again, but police blocked their path.

Some journalists covering the protests said they were targets of threats and violence from demonstrators. A freelance Associated Press videographer said a protester threw his camera to the ground and damaged it. He said later he was using a different camera and protesters told him they would beat him if he didn't put it away. A KTVI reporter said water bottles were thrown at him after a protester taunted him, drawing a crowd.

The St. Louis area has a history of unrest in similar cases, including after Brown's death, when protests, some of them violent, erupted.

In Smith's case, the encounter began when Stockley and his partner tried to corner Smith in a fast-food restaurant parking lot after seeing what appeared to be a drug deal. Stockley testified that he saw what he believed was a gun, and his partner yelled "gun!" as Smith backed into the police SUV twice to get away.

At the end of the chase, Stockley opened fire only when Smith, still in his car, refused commands to put up his hands and reached along the seat "in the area where the gun was," Bruntrager said. Stockley said he climbed into Smith's car and found a revolver between the center console and passenger seat.

But prosecutors questioned why Stockley dug into a bag in the back seat of the police SUV before returning to Smith's car.

The gun found in Smith's car did not have his DNA on it, but it did have Stockley's.