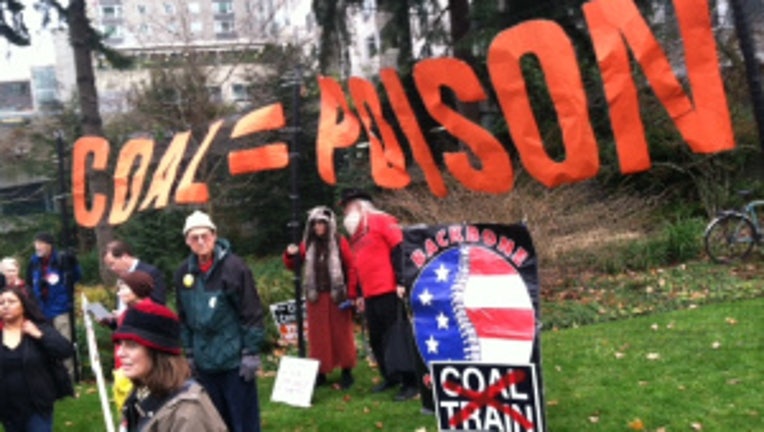 SEATTLE -- Hundreds of protesters gathered outside the Washington State Convention Center Thursday to make sure their voices were heard in opposition of coal trains.

Many were holding "No Coal in Seattle" signs. And all present were concerned about the impact transporting coal could have on the environment if a major coal terminal is built near Bellingham.

“There’s nothing right about this,” said protester John Riggs.

If a coal terminal was built in Bellingham, trains loaded with coal would travel through Seattle and up the coast to Bellingham. The coal would then be transported overseas to places such as China.

Proponents of the plan said a coal terminal could bring much needed jobs to Bellingham and the Puget Sound.  The trains moving 54 million tons of coal a year along the West Coast will be a huge economic boost to the northwest, supporters said, and bring more than a thousand jobs.

“It generates tax revenue,” Waters said. “So it's $92 million worth of tax revenues during two years of construction and about $11 million of tax revenue on an ongoing basis.”

But opponents argue that the trains are bad for the local environment and could be bad for businesses in the area. Kyle Griffith owns the Seattle Great Wheel on the waterfront. He said more trains mean more delays downtown, creating a kind-of wall in Seattle, blocking tourists and locals from getting to the waterfront.

“We are very concerned that would happen and people would turn around and not come back,” said Griffith.

Seattle Mayor Mike McGinn also remains skeptical. He wants his own study to determine the economic hit Seattle may take if the coal trains are allowed to run.

“The gates will be down an additional one to three hours a day,” McGinn said. “We’re talking about eighteen, one mile long coal trains moving through relatively slowly, and those are significant economic impacts.”

An Environmental Impact Statement will now be drafted. And even if the controversial plan is approved, the new terminal wouldn't be up and running for five more years.