ANACORTES -- Three people who chained themselves to large oil drums on the train tracks near the Tesoro Oil Refinery, hoping to block deliveries and outgoing oil to and from one of the Pacific Northwest's largest refineries, were arrested.

The three people chained to the tracks were flocked by a group of like-minded protesters near the intersection of March Point Road and North Texas Highway Monday morning. The group, Rising Tide Seattle, said the protesters positioned themselves in order to demand the "immediate halt" of Bakken oil through the northwest, as well as protest new oil-by rail trains-proposed.

The protest was brief, as police came to the scene around 11:30 a.m. at the request of Tesoro. Protesters unchanged themselves from the tracks and were arrested for trespassing around 12:30 p.m., and were largely compliant, police said.

A 62-year-old Bainbridge Island woman, a 28-year-old Seattle man and a 60-year-old Anacortes woman were all transported to the Skagit County Jail.

The rail line remained closed at 12:40 p.m. as crews removed some debris from the tracks.

The group said the protest was largely spurred on by Thursday's oil train derailment under the Magnolia Bridge in Seattle.

"Thursday's derailment was the last straw," protester Jan Woodruff said. "If federal and state regulators won't stand up to the fossil fuel companies endangering our communities, then we, the people of those communities, will do so."

The Anacortes Refinery has a total crude-oil capacity of 120,000 barrels per day, and supplies gasoline and diesel fuel to markets in Washington and Oregon. 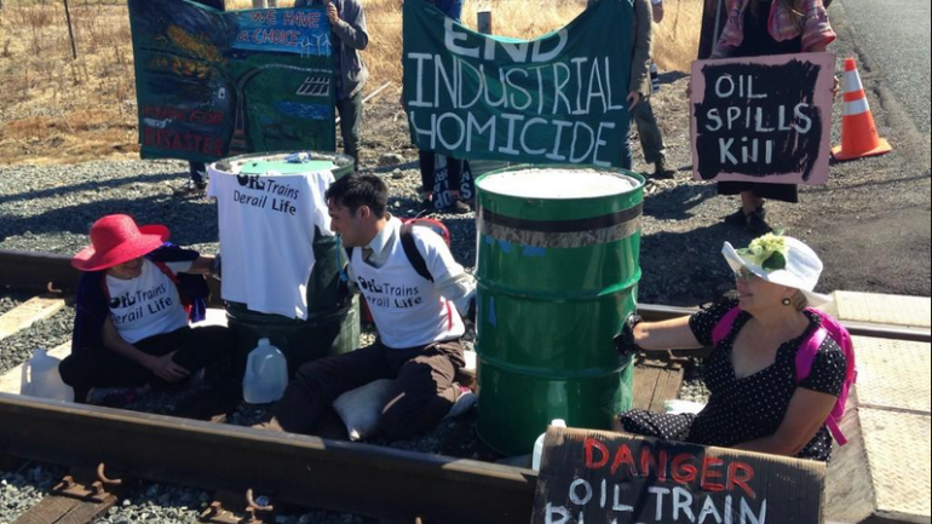