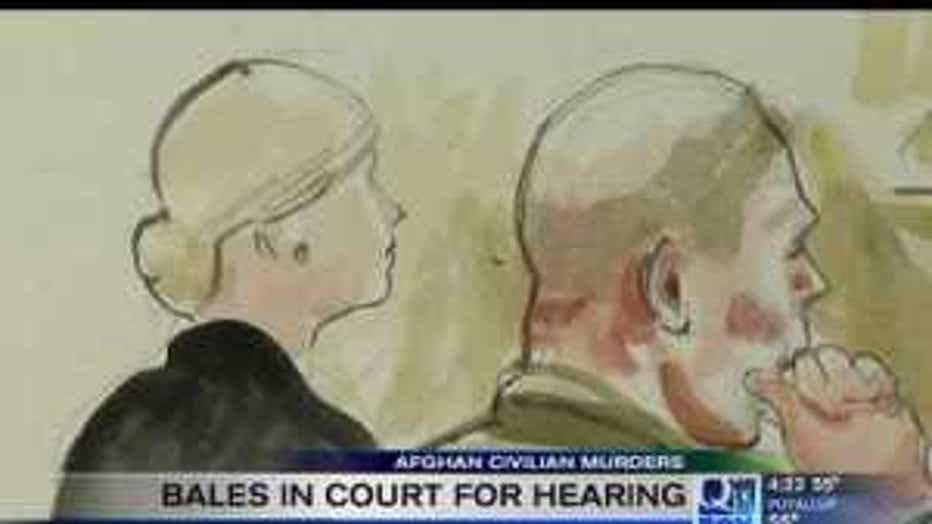 TACOMA —
An Army sergeant accused of killing 16 Afghan civilians in a middle-of-the-night rampage returned halfway through the killing spree and told a friend: “Hey Mac, I just shot some people in Alkozai,” an Army prosecutor said Monday at the opening of Staff Sgt. Robert Bales’ preliminary hearing on murder charges.

When that fellow sergeant appeared not to believe him, telling him to “quit messing around” because he needed to go back to sleep, Bales said: “Cool, I’m going to Najiban, I’ll be back at 5." At that point, the 39-year-old sergeant left the base again and allegedly shot 11 people in that second village, south of the Army outpost near Kandahar.

A general alarm was raised after an Afghan guard spotted Bales leaving the base the second time. By the time Bales returned — allegedly covered in blood and wearing an Afghan shawl around his shoulders — he seemed surprised to be greeted with leveled guns and demands that he drop his own weapon, prosecutor Lt. Col. Joseph Morse told a hearing officer at the Article 32 proceeding at Joint Base Lewis-McChord, Bales' first military court hearing.

"Are you kidding me? ... Mac, did you rat me out?" Bales allegedly said as he was ordered to drop his weapons, which included an M-4 rifle, a pistol and a grenade launcher.

“He makes multiple admissions that not only did he commit these crimes … he was lucid, he was coherent, he was responsive,” Morse said.

"You will hear him apologize multiple times, not for doing the killings, but for letting the team down," the prosecutor said. "You’re going to hear Staff Sgt. Bales say, 'It’s bad, it’s really bad.'… You’ll hear Sgt. Bales tell , 'Some sick is going to come out of this.' "

The prosecutor’s statement provides the first detailed account of the early morning of March 11, when Bales is accused of engaging in a five-hour attack in both Alkozai, just north of the special forces base at Camp Belambay, and in Najiban, to the south.

Morse said Bales, a veteran of four combat deployments from JBLM and father of two, was drinking Jack Daniel's and soda with friends and watching the movie "Man on Fire" at the base on the evening before the attacks.

Just before leaving the Afghan base at midnight, Morse said, Bales appeared at the room of one of the special forces team members deployed at the camp and had a “hugely important” conversation that prosecutors believe helped explain Bales’ motivation for the killings, Morse said.

Bales told the team member he "admires" the special forces “team guys” deployed at Camp Belambay and wished he could have such a job. He talked about domestic problems at home and expressed frustration with the rules of engagement that he believed led to injuries of U.S. forces sustained from an improvised explosive device in the days before the shootings, Morse said.

Bales told him “they should have done something the very next day to find the people that planted the IED,” Morse said.

Prosecutors concede that their forensic evidence is limited; they weren’t able to visit the scenes of the shootings until a month later. But early DNA evidence has matched a woman’s DNA found on the walls and floor of Najiban resident Mohammed Wazir’s house with DNA found on Bales’ boots, shirt, pants, underwear and weapons, Morse said.

The hearing, which will determine if there is enough evidence for the charges Bales faces to proceed to a court-martial, is expected to last up to two weeks.

Bales arrived at JBLM near Tacoma Oct. 15, after being transferred from Fort Leavenworth, Kan., where he spent months in confinement.Bales faces 16 counts of premeditated murder; six counts of attempted murder; seven counts of assault; and one count each of possessing steroids, using steroids, destroying a laptop, burning bodies and using alcohol.

Prosecutors plan to seek the death penalty if Bales' case moves to trial.

Browne told the Seattle Times he will fly to Kandahar Air Field in southern Afghanistan to cross-examine more than 10 Afghan villagers during the trial. The rest of Bales' defense team will remain at JBLM. Bales remembers little from the time of attacks, his lawyers have said.

Bales is a married father of two from Lake Tapps, Wash. He is an Ohio native who joined the Army in late 2001, after his career as a stockbroker fell apart.