The protests had been pre-planned before Saturday’s violence in Charlottesville, Virginia.

Some people tried to force their way past police and caused police to use pepper spray moving them back. There were reports of rocks being thrown at officers.

Seattle Police ended up arresting three men, one for obstruction and two others for assault. 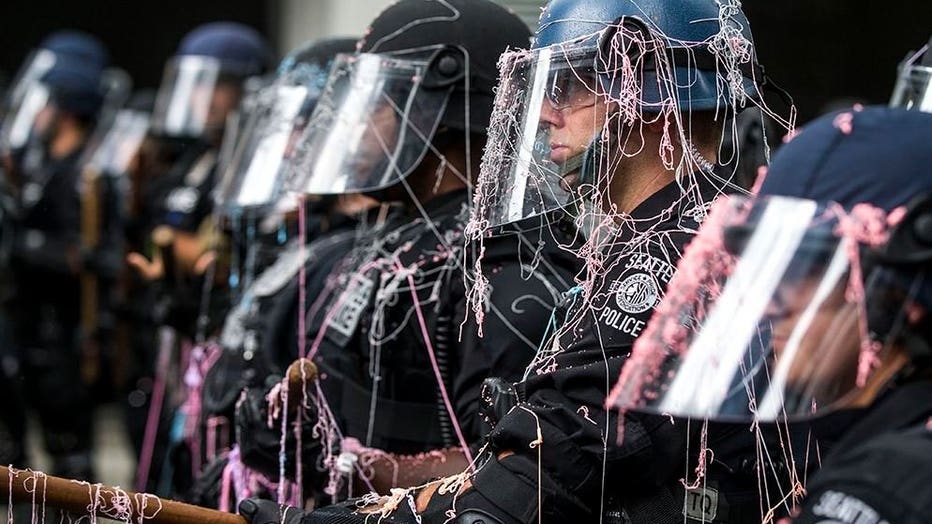 Police are sprayed with silly string as they hold the line at 2nd Avenue and Pine Street to block the “Solidarity Against Hate” march from reaching Westlake Park, where the “Freedom Rally” by the Portland... (Bettina Hansen / The Seattle Times)

Westlake Park in downtown Seattle, the site of the latest protest in the city bringing a diverse group of people together following the attack in Charlottesville, Virginia over the weekend.

Gibson says the west coast has been infected with communist ideologies and his group is bringing a positive message to Seattle where they claim liberal strongholds have been running off hatred and negativity.

“We have got to let go of hate, and start having a conversation,” said Gibson.

Heated conversation happened in the crowds between Trump supporters and anti-trump groups.

Chants ranged from showing solidarity for Charlottesville to anti-Nazi slogans.

“No KKK, no fascist USA,” shouted people in the crowd.

The diversity of opinions also on display on signs and flags held by protestors.

The two groups were kept spate by Seattle police.

“The police were keeping us about four blocks from Westlake and we wanted to go in and make sure everyone in Westlake knew that racists aren't welcome here, that fascism has no room to grow in Seattle,” said Jordan Quinn, an anti-Trump demonstrator.

"Trump's influence has allowed a lot of people's true colors to come through and I think thankfully, it has caused us to come forward too and show that we're not going to stand for that,” said Uraina Negy, another anti-trump demonstrator.

The protests were mostly peaceful and wrapped up by early evening.