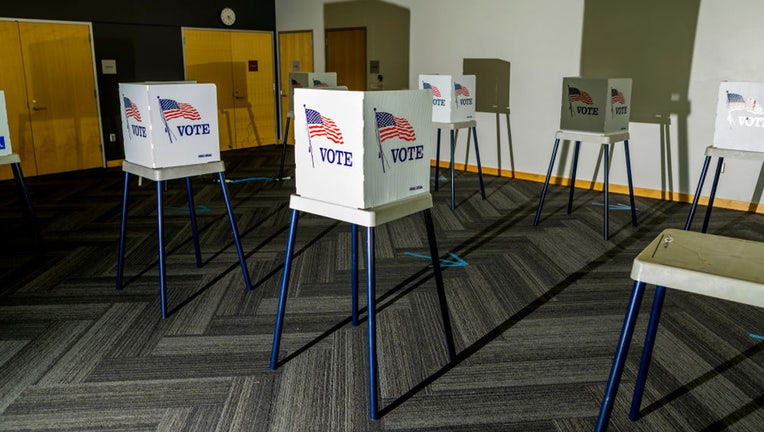 This week's nominating contests could offer the first clues as to whether the political landscape has shifted. Abortion is particularly relevant in Colorado, where GOP voters are deciding whether to nominate a rare abortion-rights-supporting Republican for U.S. Senate.

And in Illinois, a Donald Trump-backed congresswoman ignited a political firestorm over the weekend by celebrating the overturning of Roe v. Wade as "a victory for white life," phrasing that her spokesman later called a "stumble" and was meant to be "right to life."

The primaries will also offer new insight about the state of the Republican Party, with the central issue in virtually every GOP contest being fealty to Trump and his baseless conspiracy theories. Those Republicans who have pushed back at all, including a senator in Oklahoma and a congressman in Mississippi, are facing fierce challenges.

Democrats have their own challenges. Illinois voters will decide a rare incumbent-on-incumbent primary for a House seat, while in South Carolina, Democrats are picking which candidate will take on South Carolina Republican Sen. Tim Scott this fall.

In all, primary elections are playing out across Colorado, Illinois, Mississippi, New York, Oklahoma, South Carolina and Utah on Tuesday. Nebraska is holding a special election.

GOP businessman Joe O’Dea, who has spoken publicly about his support for abortion rights, is running for the nomination to take on Democratic Sen. Michael Bennet this fall. O'Dea's top rival is state Rep. Ron Hanks, who opposes abortion in all circumstances and attended the Jan. 6 rally that preceded the insurrection at the U.S. Capitol.

O'Dea said he backs a ban on late-term abortions and government funding of abortions, but the decision to terminate a pregnancy in the initial months is "between a person and their God."

While Colorado has trended Democratic over the past decade, Tuesday’s top Republican primary contests will show whether far-right candidates are making progress in their quest to take on uncontested Democrats like Bennet, Gov. Jared Polis and Secretary of State Jena Griswold, who’s led the national fight against 2020 election deniers.

One of them is Republican Tina Peters, a conspiracy-theorist county elections clerk who’s been indicted for tampering with voting equipment and posting data online. Peters wants to unseat Griswold as Colorado’s top elections official despite calls from the state GOP for Peters to suspend her campaign. She's running against Republican Pam Anderson, a former head of the state’s clerks association and defender of Colorado’s mail-in elections system.

In the Republican race to take on Polis, a former suburban Denver mayor, Greg Lopez, is facing Heidi Ganahl, the lone statewide-elected Republican as a University of Colorado regent.

As he is in most GOP contests, Trump is a central issue in Illinois' Republican primary for governor.

Darren Bailey, a conservative farmer who earned Trump's endorsement over the weekend and often reads from the Bible in campaign videos, is part of a six-candidate Republican field. His rivals include Richard Irvin, the first Black mayor of Aurora, Illinois’ second-largest city, who had $50 million in support from billionaire Ken Griffin but was heavily targeted by Democrats who see Bailey as an easier matchup for Pritzker.

While Trump endorsed Bailey, he also campaigned alongside first-term Rep. Mary Miller, who is challenging five-term Rep. Rodney Davis in one of the state's two incumbent-on-incumbent primaries.

But at Saturday's rally, Miller described the Supreme Court's reversal of Roe v. Wade as "a victory for white life." A spokesperson later said she had intended to say the decision was a victory for a "right to life."

But the Illinois congresswoman is no stranger to provocative statements. Soon after joining the House, Miller quoted Adolf Hitler, saying he was right to say that "whoever has the youth has the future."

Davis is a powerful, more moderate lawmaker who is the top Republican on the House Administration Committee, which deals with election legislation and the Capitol complex.

Meanwhile, two Democratic incumbents — Reps. Sean Casten and Marie Newman — are facing off for a Chicago-area seat. Also on the Democratic side, about two dozen candidates are fighting to succeed Rep. Bobby Rush, the only lawmaker to ever defeat Barack Obama. They include John Jackson, son of civil rights leader the Rev. Jesse Jackson, and Karin Norington-Reaves, who has Rush’s endorsement.

Gov. Kathy Hochul, who was vaulted into office last fall when Andrew Cuomo resigned amid a sexual harassment scandal, is trying to hold on to her job.

Tuesday’s elections cover New York's statewide offices and state assembly races, but primary elections for U.S. House seats and the state Senate will be held Aug. 23. Those elections were delayed because of a redistricting lawsuit that led a court to throw out new political maps.

Hochul, who was Cuomo's lieutenant governor for six years, promised to restore New Yorkers' faith in its government after stepping into the office last summer, but she hit a major stumbling block in April, when her handpicked lieutenant governor was arrested in a federal corruption probe.

Williams, a progressive running to Hochul’s left, said Hochul is either "consistently shamefully out of the loop, or shamefully enabling through her inaction." Suozzi, running to Hochul's right, says she's not being tough enough on crime, suggesting she should have gone further to harden the state’s bail law.

On the Republican side, Rep. Lee Zeldin is considered the front-runner in a crowded field that features Andrew Giuliani, the son of New York City’s former mayor Rudy Giuliani; Westchester County Executive Rob Astorino; and businessman Harry Wilson. Former Vice President Mike Pence has endorsed Zeldin, who also enjoys the backing of the state GOP and Conservative Party, but Trump has stayed out of the race.

The Republican primary for U.S. Senate pits one of Trump’s closest allies, GOP incumbent Sen. Mike Lee, against two challengers who have spent months questioning if Lee’s loyalty to the former president will hurt Utah residents.

Former state lawmaker Becky Edwards and political operative Ally Isom have attacked Lee as a divisive politician who cares less about governing than about television appearances and winning Trump's favor. Unlike Lee, neither voted for Trump in 2020.

Both Republican challengers have highlighted the post-election text messages Lee sent to Trump’s chief of staff, which show his early involvement in efforts to overturn the election. Edwards has also stood out by saying she disagreed with the U.S. Supreme Court’s decision to revisit Roe v. Wade.

The Senate primary is testing whether Trump's brand of divisive politics and conspiracy theories resonates with members of The Church of Jesus Christ of Latter-day Saints, who make up a majority of Utah’s population.

In November, the winner will take on independent Evan McMullin, a former Republican who won backing from the state Democratic Party in April.

Congressional primary runoffs are rare in Mississippi, but on Tuesday, two of the state’s Republican incumbents are fighting to keep their jobs in runoffs against challengers from their own party.

Rep. Steven Palazzo is seeking a seventh term and was considered vulnerable after being accused in a 2021 congressional ethics report of abusing his office by misspending campaign funds.

Rep. Michael Guest is seeking a third term. He voted to create an independent commission to investigate the Jan. 6 Capitol insurrection and was forced into a runoff amid criticism that he was disloyal to Trump.

Both Palazzo and Guest failed to cross the 50% threshold to win outright in their June 7 primaries. Palazzo is facing Mike Ezell, the sheriff of a coastal county, while Guest is going up against Michael Cassidy, a former Navy fighter pilot who has highlighted his allegiance to Trump.

Republican Sen. James Lankford is facing a primary test of his own that centers on Trump.

A judge on Tuesday will sentence longtime Nebraska congressman Jeff Fortenberry on campaign contribution charges on the same day voters will decide who should serve out the Republican’s term. Fortenberry resigned in March.

Republican Mike Flood will be favored to win the election in the Republican-leaning district over Democrat Patty Pansing Brooks. Both are state legislators.

Regardless of who wins the special election, Flood and Pansing Brooks will face off again in the November general election. The eastern Nebraska district includes Lincoln and parts of suburban Omaha as well as rural area.