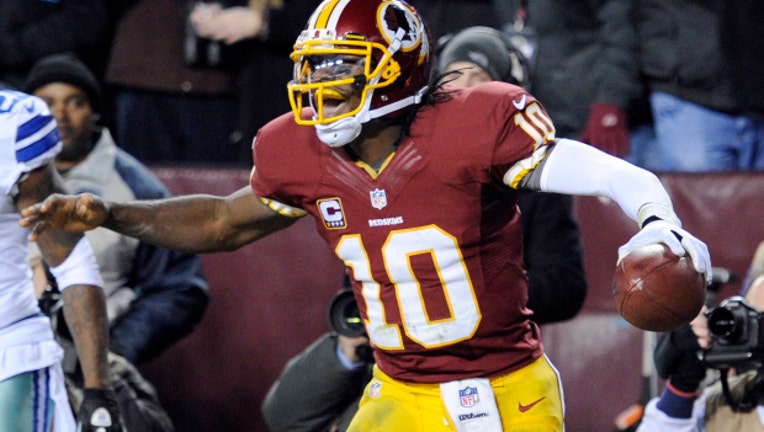 Star power: Robert Griffin III. Just look what the Redskins have gotten from the quarterback they made the third pick overall in April’s NFL Draft. RGIII set a rookie record with his 102.4 passer rating, in large part because he threw 20 touchdown passes and only five interceptions. He also ran for 815 yards and seven more TDs. He has led the Redskins to their first division title since 1999 and helped them lead the League in rushing for the first time since 1933. And RGIII has done it all with a panache that has captured the sporting consciousness of an area that usually is preoccupied with politics. “For a guy to win the Heisman Trophy, be the top pick, the savior of the franchise, come in here so humble – from Day 1 he came in here working, that’s why he has that ‘C’ on his chest,” cornerback DeAngelo Hall said after Sunday night’s game.

Unsung hero: Alfred Morris. While it might sound ludicrous to label someone who just ran for 200 yards to cap his 1,613-yard season as unsung – especially after 82,845 fans serenaded the rookie back with “Al-fred Mor-ris. Al-fred Mor-ris” during the fourth quarter of Sunday night’s winner-takes-the-division game against the Cowboys. But that’s how the rookie running back views him. “I’ll never be a star. I’ll always just be Alfred,” Morris told reporters after Sunday night’s game. “When I came in, nobody knew who I was. I wouldn’t ever change. I couldn’t change if I tried.” It’s not just that Morris was a sixth-round draft choice out of Florida Atlantic, and drives a 1991 Mazda 626 that he calls his “Bentley,” it’s that his large-legged, slopped-shouldered frame and uninspiring running style make him look nothing like what he has become – which is the single-season rushing leader in franchise history. As RGIII put it, “Alfred makes runs that are blocked for 3 yards into 7-yard gains. He gets those hard yards.”

On the spot: Reed Doughty. It’s not all on the Redskins’ strong safety, but the Washington defense has been vulnerable against other teams’ tight ends all season in the passing game. They have yielded at least five receptions to opposing tight ends 11 times – led by the Falcons’ Tony Gonzalez catching 13 for 123 yards. They have allowed at least 50 yards receiving to opposing tight ends eight times – with the Cowboys’ Jason Witten getting 74 on nine catches. Eight different starting tight ends caught TD passes against the Redskins – Witten, Gonzalez, the Ravens’ Dennis Pitta, Giants’ Martellus Bennett, Steelers’ Heath Miller, Vikings’ Kyle Rudolph, Bengals’ Jermaine Gresham and Saints’ Jimmy Graham. The Seahawks have had only two 100-yard receivers all season, and one of them was No. 2 tight end Anthony McCoy. He and starter Zach Miller also have combined for six TD catches.

Burning question: What’s up with London Fletcher? The Redskins’ inside linebacker is 37 and just completed his 15th season. He has played the second half of this season on a bad ankle. But you’d never know any of this from the way he is playing. Fletcher had nine tackles, two sacks and a tipped pass in the title-clinching win over the Cowboys. He also leads the team with 139 tackles and five interceptions. No wonder Michael Robinson, the Seahawks’ lead-blocking fullback, considers Fletcher one of the tougher middle men in the business.

The last word: “We have a chance to be that team. But every team is hot. Seattle is hot right now. There are a lot of good teams in the NFC.” – tight end Chris Cooley, when reminded that recent Super Bowl winners have frequently been the hottest team at the end of the season