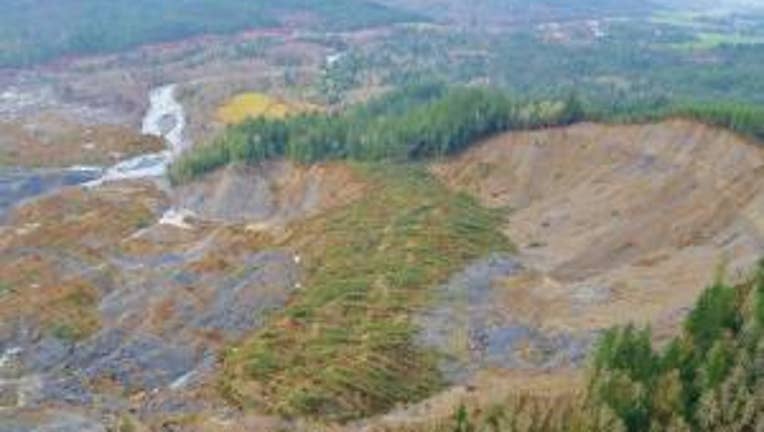 This aerial photo shows the force of the Washington mudslide. Trees that were at the very top of the hill now lie across the slide's width like a woven belt. (Photo: Washington National Guard)

DARRINGTON -- The people of Darrington and Oso are the kind of people who pull themselves up by their boot straps and they take care of each other. Still those we spoke with say they look forward to President Obama’s visit.

In Darrington there is a sense of anticipation.

Aside from the opportunity to see an American President up close, people understand, his visit will refocus attention on the struggle to recover after the biggest natural disaster this area has ever seen.

The entire town is decked out in yellow ribbons to honor those who lost their lives in the slide almost a month ago.

The rebuilding process and recovery will take time.

"I think this is going to do good things for us and these families, in the since of having the Commander in Chief of the federal government really understand how powerful this devastation is, really understand how hard it is economically for this area to recover,” Washington Governor Jay Inslee said.

It’s a recovery that will take a long time.

With additional federal aid now on the way and a presidential visit, people here say they are encouraged, but some wish he hadn't waited so long.

"I wish he would have come to see when it first happened instead of waiting till most of it is all cleared up now, but he'll get an idea of what's going on and I believe a lot of people in town are looking forward to it too,” Darrington resident Mary Jack said.

As one woman told me; closure is still a long way away.

It's one of the reasons the president is making the trip.

“It also helps a little bit with people coming to grips with the tremendous grief they’ve had to know that the whole country is behind these families. They are in our hearts. I know when I talked to President Obama about this, it’s something he does care about personally and so I think it will help us,” Governor Inslee said.

Meanwhile the number dead in the slide zone remains at 39. Four are still missing and the search effort continues; a search president Obama will see first-hand when he arrives on Tuesday.