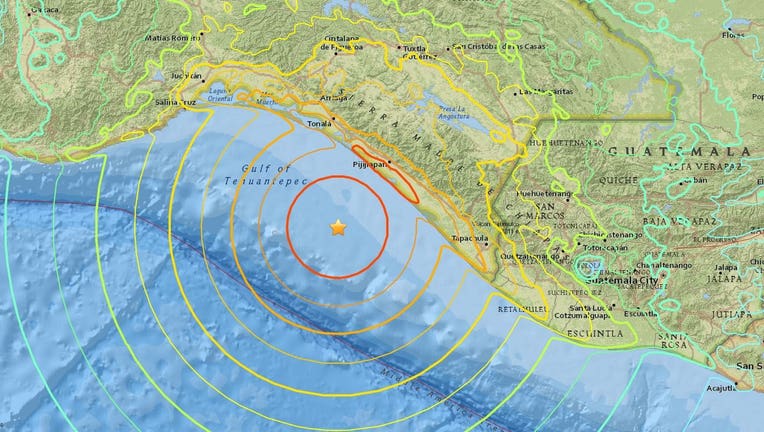 The quake was so strong that it caused buildings to sway violently in Mexico's capital more than 1,000 kilometers (650 miles) away. Residents fled buildings, many in their pajamas, and gathered in frightened groups in the street. Some neighborhoods remained in darkness after electricity was knocked out.

The U.S. Geological Survey said the quake struck at 11:49 p.m. Thursday local time and its epicenter was 165 kilometers (102 miles) west of Tapachula in Chiapas not far from Guatemala. It had a depth of 69.7 kilometers (43.31 miles).

The Pacific Tsunami Warning Center reported a tsunami was confirmed in Mexico, with the largest wave so far at 2.3 feet above tide level.

"The house moved like chewing gum and the light and internet went out momentarily," said Rodrigo Soberanes, who lives near San Cristobal de las Casas in Chiapas, a poor, largely indigenous state popular with tourists.

Chiapas Gov. Manuel Velasco said that three people were killed in San Cristobal, including two women who died when a house and a wall collapsed.

Tabasco Gov. Arturo Nunez said two children died there -- one of the children died when a wall collapsed, and the other was a baby who died in a children's hospital that lost electricity, cutting off the supply to the infant's ventilator.

Velasco called on people living near the coast to leave their houses as a protective measure.

"There is damage to hospitals that have lost energy," he said. "Homes, schools and hospitals have been damaged."

Civil Defense in Chiapas said on its Twitter account that its personnel were in the streets aiding people and warned residents to prepare for aftershocks.

In neighboring Guatemala, President Jimmy Morales spoke on national television to call for calm while emergency crews checked for damage.

"We have reports of some damage and the death of one person, even though we still don't have details," Morales said. He said the unconfirmed death occurred in San Marcos state near the border with Mexico.

Lucy Jones, a seismologist in California who works with the U.S. Geological Survey, said such as quake was to be expected.

"Off the west coast of Mexico is what's called the subduction zone, the Pacific Plate is moving under the Mexican peninsula," she said. "It's a very flat fault, so it's a place that has big earthquakes relatively often because of that."

"There's likely to be a small tsunami going to the southwest. It's not going to be coming up and affecting California or Hawaii," she said. "For tsunami generation, an 8 is relatively small."

Several aftershocks in the magnitude-5 ranges then rattled the region, too.

The USGS said, "Overall, the population in this region resides in structures that are a mix of vulnerable and earthquake resistant construction. The predominant vulnerable building types are adobe block with concrete bond beam and mud wall construction."