Florida rushed to prepare for a possible direct hit on the Miami area by the Category 5 storm with potentially catastrophic 185 mph winds.

Nearly every building on the island of Barbuda was damaged when the eye of the storm passed almost directly overhead early Wednesday and about 60 percent of the island’s roughly 1,400 people were left homeless, Antigua and Barbuda Prime Minister Gaston Browne told The Associated Press.

“Either they were totally demolished or they would have lost their roof,” Browne said after returning to Antigua from a plane trip to the neighboring island. “It is just really a horrendous situation.”

He said roads and telecommunications systems were destroyed and recovery will take months, if not years. A 2-year-old child was killed as a family tried to escape a damaged home during the storm, Browne told the AP. 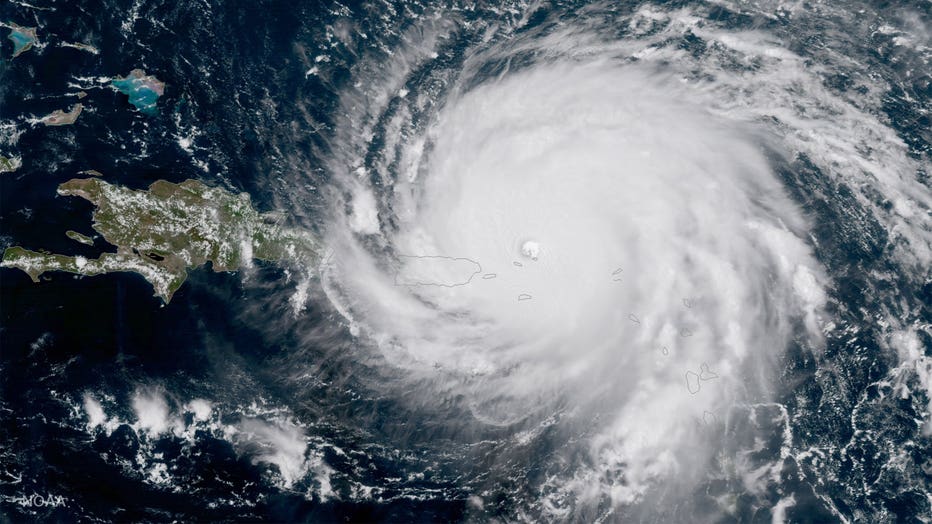 CARIBBEAN - AUGUST 25: In this NOAA handout image, NOAA's GOES satellite shows Hurricane Irma as it makes its way across the Atlantic Ocean in to the Caribbean -- a category 5 storm with winds as high as 185 miles per hour -- today at about 3:15 pm (

Significant effects were also reported on St. Martin, an island split between French and Dutch control. Photos and video circulating on social media showed major damage to the airport in Philipsburg and the coastal village of Marigot heavily flooded. France sent emergency food and water rations there and to the French island of St. Bart’s, where Irma ripped off roofs and knocked out all electricity. Dutch marines who flew to St. Martin and two other Dutch islands hammered by Irma reported extensive damage but no deaths or injuries.

By Wednesday evening, the center of the storm was about 50 miles (80 kilometers) north of San Juan, Puerto Rico, and heading west-northwest at 16 mph (26 kph).

More than half the island of Puerto Rico was without power and nearly 50,000 without water, the U.S. territory’s emergency management agency said. Fourteen hospitals were using generators after losing power, and trees and light poles were strewn across roads.

The tiny island of Culebra reported sustained winds of 88 mph and wind gusts of 110 mph.

The U.S. National Weather Service said Puerto Rico had not seen a hurricane of Irma’s magnitude since Hurricane San Felipe in 1928, which killed a total of 2,748 people in Guadeloupe, Puerto Rico and Florida.

Puerto Rico’s public power company has cut back on staff and maintenance amid a decade-long economic crisis and the agency’s director warned that some areas could be without power from four to six months because the infrastructure has already deteriorated so badly.

President Donald Trump this week approved an emergency declaration for the U.S. Virgin Islands and Puerto Rico. That means the Federal Emergency Management Agency and other agencies can remove debris and give other services that will largely be paid for by the U.S. government.

“No matter what precautions we take, the coastal flooding will impact oil tanks,” said Catherine McCabe, a regional administrator.

Another concern was the 20 Superfund sites in Puerto Rico and the three in the U.S. Virgin islands, given that most were near the coast, she said. She said EPA officials in New Jersey were on standby to fly down after the hurricane passed through.

State maintenance worker Juan Tosado said he was without power for three months after Hurricane Hugo killed dozens of people in Puerto Rico in 1989.

Tourist Pauline Jackson, a 59-year-old registered nurse from Tampa, Florida, puffed on her last cigarette as a San Juan hotel prepared to shutter its doors ahead of the storm.

“I’m in a hurricane here, and when I get home, I’ll be in the same hurricane. It’s crazy,” she said.

She tried to leave ahead of the storm but all flights were sold out, and she worried about her home in Tampa.

“When you’re from Florida, you understand a Category 5 hurricane,” said Jackson, who was scheduled to fly out Friday.