Grotton, Baring residents warned of dangerous winter ahead due to wildfire-damaged lands

The Bolt Creek Fire may not be a concern for people living in Baring, Grotto and Skykomish – but the damage it left behind has emergency managers giving a serious warning to people in that area: prepare to be stranded this winter.

BARING, Wash. - The Bolt Creek Fire may not be a concern for people living in Baring, Grotto and Skykomish – but the damage it left behind has emergency managers giving a serious warning to people in that area: prepare to be stranded this winter.

On Tuesday night, the deputy director of King County Emergency Management spoke to a crowd gathered inside the fire station in Baring.

Those in attendance were concerned about this winter’s outlook. The news they got, reinforced some of their worst fears: the burn scar is severe, and debris flows are likely. Given that US-2 can often be blocked off by snow to the east, there’s a real possibility that multiple events could strand individuals.

Locals were warned to stock up and be prepared with goods that will last them two weeks.

"If it’s anytime soon we’re not going to be able to have the stock of food and supplies that this meeting suggested that all of us had," said William Wade.

Wade is retired and lives with his wife. They rely on social security to get by, he said that he lost more than a week’s worth of food when he lost power during the Bolt Creek Fire while he had evacuated his home. He has a generator, but he couldn’t run it without being on-site.

"We’re not rich by any means," he said. "It is difficult to build up what you already had in store."

There is help on the way, though. King County is working with a group of nonprofits to ensure two weeks of non-perishable goods are placed in both Baring and Skykomish for a backup – a sign of how serious this year’s setup is looking. The supplies will be enough for 150 people in each location.

They also told people who live near the fire that there is the possibility of reimbursement for those who faced high costs for shelter, transportation, fuel costs and damages due to pro-longed power outages.

More information about the assistance program is available here.

"We have some pretty significant areas of concern," Alysha Kaplan, the deputy director of King County Emergency Management. "Debris flows could block the highway, could isolate the community and create difficulties getting around." 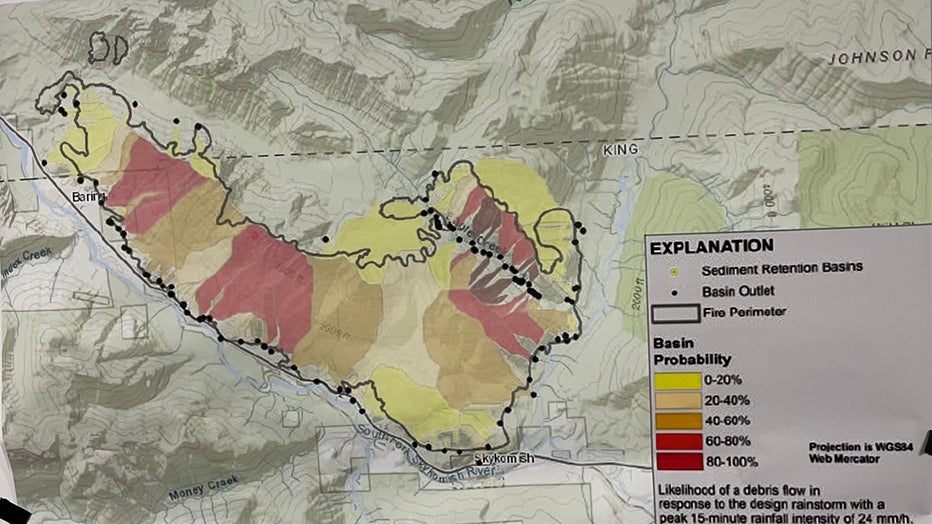 A map released by the state that shows the areas with the biggest landslide risk.

The biggest areas of concern are near Grotto and Baring where the burn scar is most severe. It’s likely that debris could come off higher elevations in the form of a landslide, which could affect anything from homes to the road.

Kaplan warned that while some places are at higher risk, firefighters that worked the Bolt Creek Fire have made it clear: debris can come down from almost anywhere near that burn scar. She noted that some firefighters were almost killed by burning debris that came down hillsides at a fast speed.

One of the positives in all of this, is that past snow events have shown some of the weak spots of emergency response. For instance, the community has already worked with some local wireless providers to ensure generators are on-hand during power outages. In the past, people lost the ability to use phone service when outages occurred – that’s less likely now.

However, talk of outages paired with debris flows and snow events had a lot of locals noticeably concerned. They’re used to taking care of themselves, but this is adding yet another burden to a rural, remote area. Historical data from other areas post-wildfire show that while this year is the biggest concern, the threat will likely loom for several years.

"This is something you’re in for the long haul," said Kaplan. "This winter will probably have the most significant quantity of impact, which is why we want to talk about how much stuff you need to have on-hand."

Communities in burn areas at a 'high risk' for slides, flooding with recent rainfall

The relief many have felt from seeing snow and rain is short-lived for those living in the shadow of the steep slopes and mountainsides burned by the late-season fires.