The city's police chief is pleading for the violence to end.

PORTLAND, Ore. - It’s been nearly a week since federal officers withdrew from guarding Portland’s federal courthouse during nightly protests, but a large fence they installed is still there and city officials say it remains illegal.

The city of Portland continues to impose a $500 fine every 15 minutes for the fence, which was erected in the public right-of-way without a permit around the Mark O. Hatfield United States Courthouse, according to the Oregonian/OregonLive. 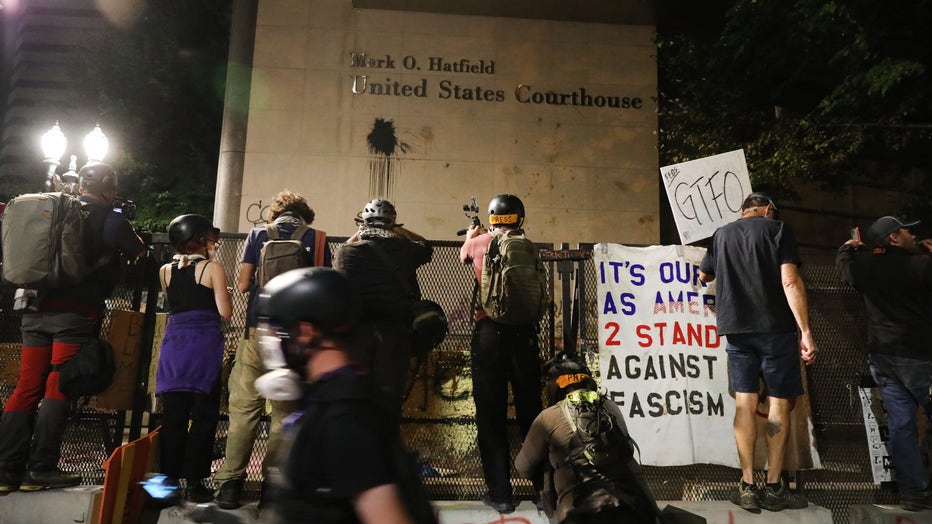 PORTLAND, OREGON - JULY 28: People gather in protest in front of the Mark O. Hatfield federal courthouse in downtown Portland as the city experiences another night of unrest on July 28, 2020 in Portland, Oregon. (Photo by Spencer Platt/Getty Images)

“The fence is currently still in place,” Margaux Weeke, spokesperson for City Commissioner Chloe Eudaly, said Tuesday. “I’d have to refer you to the federal government for their rationale as to why the fence is still obstructing our traveling lane.”

Department of Homeland Security officials did not respond to multiple requests for comment.

Last week, Eudaly announced that her transportation bureau would impose the highest possible fine on the federal government for erecting the fence without a permit in the bike lane in front of the courthouse.

Weeke said the city attorney’s office has been in touch with the Department of Homeland Security, which spearheaded the controversial escalation in federal activity outside the courthouse in recent weeks, spurred on by the Trump administration’s false claims that the courthouse was in danger of being destroyed by protesters.

Eudaly last week described the federal officials as “occupiers” and said normally her bureau would remove the unpermitted fence. But she didn’t feel it would be safe for city workers to do so with federal officials in town.

It’s unclear why the city isn’t removing the fence now that those federal officers are no longer leading the nightly law enforcement response and many of their ranks have left town.