PORTLAND, Ore. (AP) - City councilors in Oregon’s largest city have delayed a vote on an additional $18 million in cuts to the Portland police budget until after next week’s presidential election amid a heated mayoral race and mounting tension over the police handling of near-nightly protests.

Mayor Ted Wheeler said in a statement after the decision late Wednesday that the council needs more time to evaluate the impact of the cuts on police services.

The council adjourned after three council members, including Wheeler, asked for more time to consider the proposal.

That angered Councilwoman Jo Ann Hardesty, the first Black woman elected to the council, and she abruptly left the virtual meeting, The Oregonian/OregonLive reported Thursday. 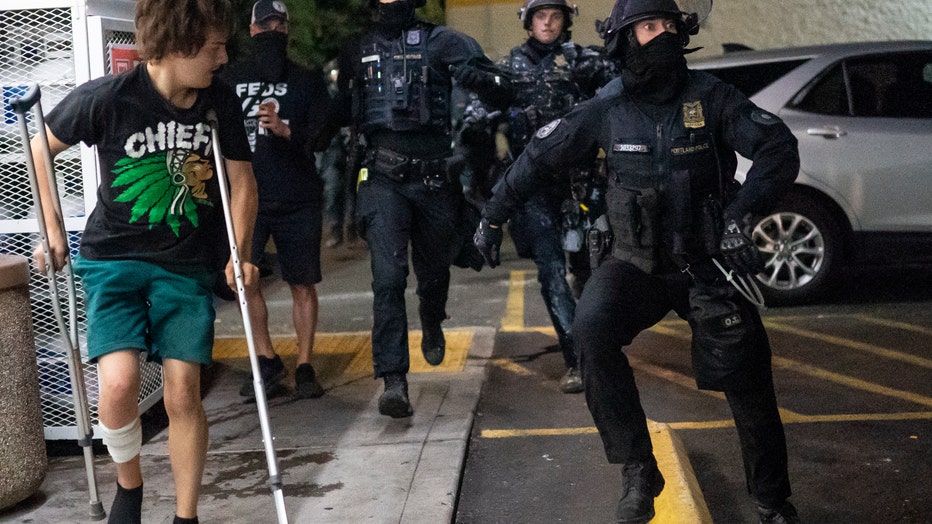 PORTLAND, OR - SEPTEMBER 5: Portland police officers charge past a man on crutches while dispersing a protest against racial injustice and police brutality early in the morning on September 5, 2020 in Portland, Oregon - the 99th night of protests in

Wheeler, a Democrat, is running for reelection Tuesday in a tight race against a challenger to his political left where racial injustice protests have dominated national headlines since the police killing of George Floyd in May.

Wheeler’s challenger, Sarah Iannarone, supports cutting $50 million from the police budget, an amount Wheeler has resisted amid concerns about how police services would be replaced.

Iannarone was one of more than 150 people who testified in favor of the additional police cuts. Hardesty, who had not endorsed either mayoral candidate, said on Facebook on Thursday that she would endorse Iannarone.

Wheeler said he supports police reform and reallocating money from police to the city’s social services but said he didn’t want to rush it.

“I know every member of the Council is committed to this work. We will make changes. We will adopt reforms,” Wheeler said in his statement. “And, to do that well, we need to listen to everyone and ensure that we have a shared understanding of what will happen as a result of our decisions.”

Chief Chuck Lovell said at a news conference Thursday that the cuts might lead to more than 100 layoffs. The bureau has been unable to replace 51 officers who retired in August due to budget cuts made earlier this summer.

City lawmakers cut nearly $16 million from the nearly $230 million police budget in June, eliminating funding for transit police, school resource officers and a gun violence reduction team. Another $12 million was cut from the police budget earlier this year because of COVID-19-related costs and revenue shortfalls, according to the Portland Police Association.

In a statement released later Thursday, Lovell said the new round of proposed cuts could threaten a number of additional programs, including a behavioral health unit that works with the mentally ill; a canine unit; a narcotics and organized crime unit and a traffic unit, among others.

“I don’t see a path forward from an $18 million cut that wouldn’t result in people being laid off,” he said. “A cut of $18 million would be devastating.”

The proposal for additional cuts was advanced by Hardesty.

She said that nearly one-third of the additional police budget cuts could be achieved by not filling police officer positions that are vacant following August retirements.

She is also proposing more than $3 million in cuts to police materials such as impact munitions and riot gear that have been used by officers patrolling Portland’s protests.

Wheeler said he was not convinced the cuts could be achieved without police layoffs.