SEATTLE-TACOMA INTERNATIONAL AIRPORT -- Two Port of Seattle commissioners and members of the public gave the Federal Aviation Administration an earful at a Tuesday afternoon meeting. The issues: Noise from the state's largest commercial airport and more transparency from the federal agency in charge of the nation's skies.

"As we continue to grow," said Commissioner Stephanie Bowman, "it's just going to get worse."

Since 2013, Port of Seattle commissioners say flights at Sea-Tac have increased about 30 percent. Airport noise has been big news around Sea-Tac since a citizens group in Burien sued the FAA about the re-routing of smaller commuter flights over the Seattle suburb and won this month in federal court.

Improved technology plays a big role. Since the 1950s, the FAA has been using radar to track the location of flights. Newer GPS and digital technology can allow for flight paths to deviate no more than a wingspan instead of several miles. GPS navigation also allows for controlled, smoother airplane descents instead of the stair-step approach that's been used for decades. A controlled descent would mean less use of the engines and therefore significantly quieter.

"It has benefits of every single phase of flight," says Suomi, "Flight planning, push back from the gate, taxiing, take-off, descent, final approach and landing."

So far, though, these have only been rolled out on the west side of the airport. In this area, the idealized flight path shown by Port and FAA officials would go right over the center of Puget Sound waters, turning in at Elliot Bay and continuing over industrial areas that straddle the Duwamish River towards Sea-Tac.

Future flight paths over Puget Sound do not have green or red lines over the Burien area during what's called a "south flow" when the prevailing winds come from the south/southwest direction. Something Sea-Tac officials say is the configuration roughly 65% of the time. The opposite northerly flow does still have some flights going over the Burien area, where noise complaints have been the most vocal in recent months. The FAA says there's no hard timeline on flights on the east side of Sea-Tac. "We’re are being very deliberate to being certain we’re doing safely," says Suomi of efforts he says are actually several years ahead of schedule. "It’s more of a crawl, walk run type of approach." 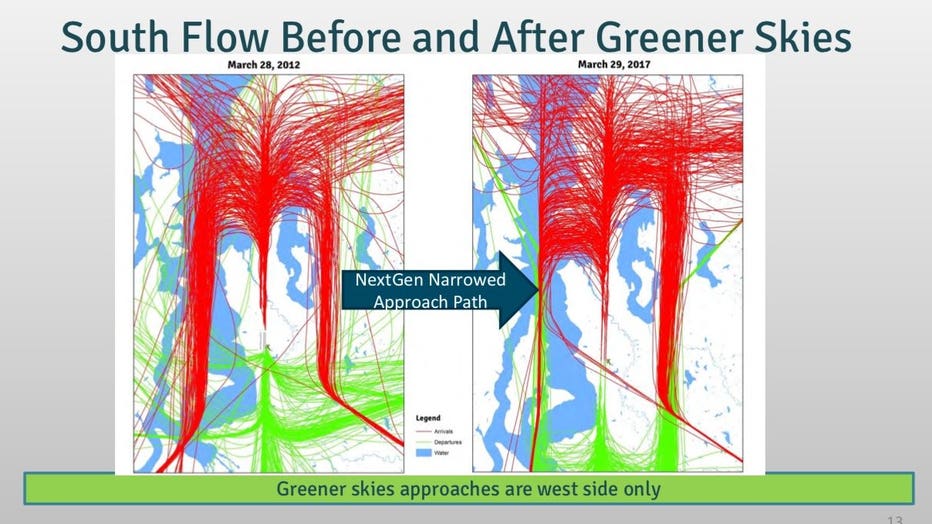 Suomi says the federal government decides where noise is considered a nuisance. It's a measurement called the 65 DNL line. It the line around an airport where the day-night average noise is 65 decibels in volume. It's something that would require an act of Congress and presidential signature to get changed. It's only in this designated area that Port of Seattle officials can use money to help with noise abatement programs like soundproofing homes, condos and public buildings. Port commissioners have observed that complaints are growing and well outside of the 65 DNL contour. They say complaints about airplane noise is coming from far south as Federal Way and as far north as Beacon Hill in Seattle. 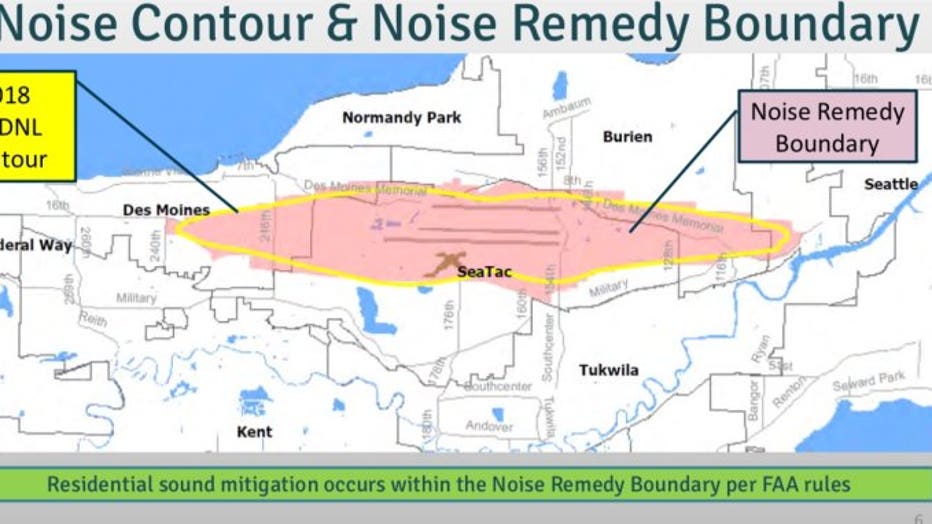 Port of Seattle Commissioner Courney Gregoire says if the FAA ever changes flight paths again, she would like residents nearby and the Port of Seattle to get at least 30 day notice. "We want full transparency when there are operational changes occur that might impact our neighboring community," says Gregoire. "And if I don't have that full conversation, I can't have that conversation with my community."

While the two FAA representatives spoke with Port of Seattle commissioners, they left citing a previous obligation before hearing from any members of the public who had wanted to address FAA officials. The group slated to speak included several mayors from airport neighboring municipalities. Boos and groans from came from the large audience as the departing FAA representatives gathered their things and left the Sea-Tac conference room.

The grassroots organization Quiet Skies Coalition of Puget Sound, which got its start locally from a retired Alaska Airlines pilot Larry Cripe, was first in line to deliver comment to the Port of Seattle Commissioners. Cripe says they'll force the FAA to be transparent in their activities by taking them to court if needed. "My fight today is more than the City of Burien," says Cripe who has lived in Burien for 35 years. "This is about our entire community. Puget Sound is going to get destroyed if we allow this unbridled growth to take place. We have got to, the people have got to stand up to our politicians, and someone is going to have to finally say enough is enough." Larry Cripe says with Sea-Tac hosting more than 412 thousand flights annually that it's time for a new regional second regional airport for Puget Sound.

As far as the economic benefits to the recent booming growth with more flights at SeaTac, the Port of Seattle's numbers show there's a benefit to the tune of 16.3 billions of dollars to the local economy. The port estimates Sea-Tac generates more than 170 thousand jobs, 19-thousand jobs directly related to the airport. The port numbers show tourism alone generating 365 million dollars annually to the economy.