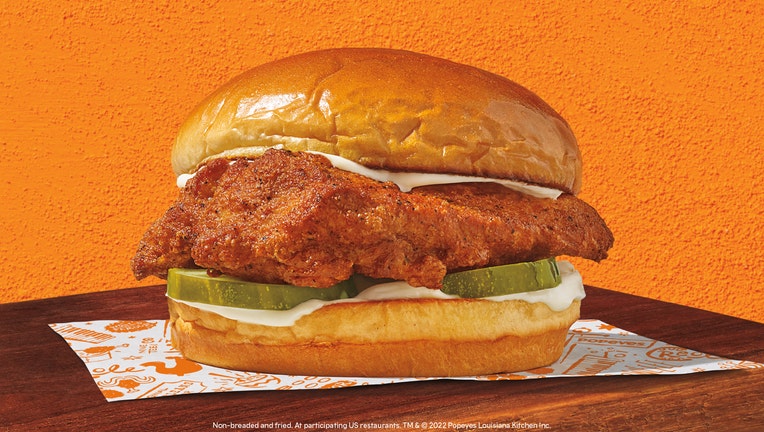 MIAMI - Who can forget the 2019 infamous chicken sandwich war where Popeye’s and other fast-food chains battled it out to see who had the best one?

Popeye’s is ready to go at it again with its newly released "Blackened Chicken Sandwich" and the fast-food fried chicken chain is daring its competitors to follow suit.

"As many will recall, the Popeyes Chicken Sandwich broke the internet in 2019, warranting copycat recipes from competitors, chefs, and at home cooks alike," the company said in a news release. "In fact, Popeyes is so confident its Blackened Chicken Sandwich can't be surpassed by potential copycats, it launched a new campaign today sharing ingredients in the sandwich while inviting competitors and guests alike to make a version of their own and 'Copy This.'"

According to the company, the new sandwich consists of "antibiotic-free, whole chicken breast, marinated for 12 hours, and perfectly seasoned with a delicious blend of Cajun and Creole spices"

The sandwich started to appear on menus Tuesdays at restaurants nationwide starting at $4.99.

When Popeyes launched its chicken sandwich in 2019 it became an instant hit, selling out in around two weeks and sparking a viral Twitter feud with rival Chick-fil-A.

The release led to long lines and feuds. In Texas, police said a man pulled a gun at a Popeyes restaurant in Houston after being told they were out of chicken sandwiches.

The sandwich garnered so much hype, Popeyes’ sales were 17% higher than average weeks after it sold out of the sandwiches, according to analytics firm Second Measure. As a response, McDonald’s franchise owners reportedly asked the chain to put out a chicken sandwich to rival competitors’ threatening sales growth.