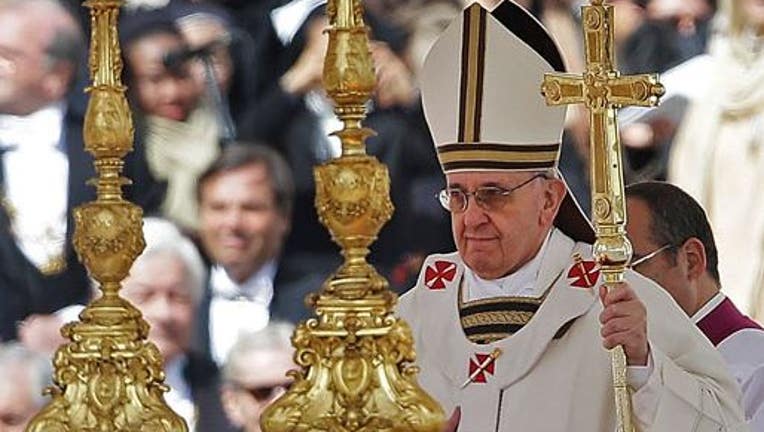 (CNN) -- Pope Francis reaffirmed the Catholic Church's opposition to same-sex marriage Wednesday but suggested in a newspaper interview that it could support some types of civil unions.

The Pope reiterated the church's longstanding teaching that "marriage is between a man and a woman." However, he said, "We have to look at different cases and evaluate them in their variety."

For example, civil unions provide financial security to cohabitating couples, "as for instance in medical care," the Pope said in a wide-ranging interview published Wednesday in Corriere della Sera, an Italian daily.

A number of Catholic bishops have supported civil unions for same-sex couples, including Pope Francis when he was Archbishop of Buenos Aires in 2010, according to reports in National Catholic Reporter and The New York Times.

This is the first time a Pope has "indicated even tentative acceptance of civil unions," according to Catholic News Service.

Pope Francis, who marks his first year in office on March 13, has sought to set a more tolerant tone for his 1 billion-member church and suggested that a broad range of topics are at least open for discussion.

In January, the Pope recalled a little girl in Buenos Aires who told her teacher that she was sad because "my mother's girlfriend doesn't like me."

"The situation in which we live now provides us with new challenges which sometimes are difficult for us to understand," the Pope told leaders of religious orders, adding that the church "must be careful not to administer a vaccine against faith to them."

The Vatican later denied that the comments signaled an opening toward same-sex unions.

Last June, Francis famously refused to judge gay priests in comments that ricocheted around the world. He has also said that the church should not "interfere" in the spiritual lives of gays and lesbians.

Support of same-sex unions of any type is fiercely contested by many Catholic church leaders.

In Wednesday's interview, Francis also addressed several other controversial issues, including the Catholic Church's ban on contraception, the role of women in the church and the devastating clergy sexual abuse scandal.

On contraception, the Pope praised Pope Paul VI for having the "courage" to "go against the majority" when restating the ban in 1968. But, Francis said, the church must also be "merciful" and "attentive to concrete situations."

Contraception and the church's ban on divorced Catholics receiving holy communion will likely be addressed at major meetings of Catholic bishops in Rome in 2014 and 2015.

"We must give a response. But to do so, we must reflect much in depth," the Pope said Wednesday.

On the role of women in the church, an issue of particular concern to Catholics in the United States, the Pope hinted that changes could be in the works.

"Women must be present in all of the places where decisions are taken," Francis said in the newspaper interview, but the church must consider more than "functional" roles for women. To that end, Catholic leaders are engaged in "deep reflection" on that issue, he said.

On the sexual abuse of children by Catholic clergy, a scandal that has rocked the church in the United States, the Pope said the abuse has left "very deep wounds" on victims.

In response, the church has done more than other institutions to be open and transparent about sexual abuse by its employees, Francis said. "But the Church is the only one to be attacked."

The report said the Vatican "has not acknowledged the extent of the crimes committed, has not taken the necessary measures to address cases of child sexual abuse and to protect children, and has adopted policies and practices which have led to the continuation of the abuse by and the impunity of the perpetrators."

The Vatican said it would study the U.N. report.

On Pope Emeritus Benedict XVI, who has surprised church-watchers with public appearances after saying he would live a cloistered life in retirement, Francis said he considers his predecessor a "wise grandfather."

"The Pope Emeritus is not a statue in a museum," Pope Francis said. Rather, the two men have decided that Benedict should participate in the church's public life rather than live a shuttered life.

"I thought about grandparents who with their wisdom, their advice, strengthen families and don't deserve to end up in an old folks home," Francis said.

Finally, he may sometimes wear a cape, but don't call Pope Francis a Superman, the popular pontiff said.

"To paint the Pope as a sort of Superman, a kind of star, seems offensive to me," Francis told Corriere della Sera. "The Pope is a man who laughs, cries, sleeps soundly and has friends like everyone else. A normal person."

Earlier this year, graffiti depicting a muscle-bound and flying Francis appeared on walls near Vatican City, but the Pope said Wednesday that he doesn't like the "mythology" surrounding his papacy.

For instance, Francis debunked the idea that he sneaks out of the Vatican at night to feed the homeless.

"It never occurred to me," he said.