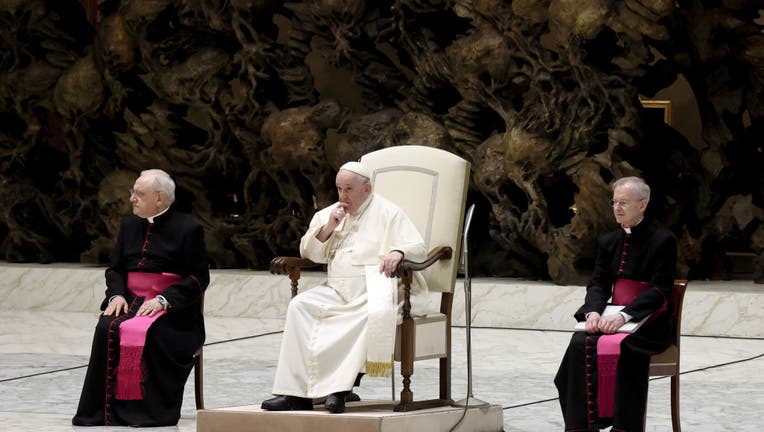 Pope Francis warned Vatican bureaucrats on Thursday to beware the devil that lurks among them, saying it is an "elegant demon" that works in people who have a rigid, holier-than-thou way of living the Catholic faith.

Francis used his annual Christmas greeting to the Roman Curia to again put the cardinals, bishops and priests who work in the Holy See on notice that they are by no means beyond reproach and are, in fact, particularly vulnerable to evil.

Francis told them that by living in the heart of the Catholic Church, "we could easily fall into the temptation of thinking we are safe, better than others, no longer in need of conversion."

"Yet we are in greater danger than all others, because we are beset by the 'elegant demon,' who does not make a loud entrance, but comes with flowers in his hand," Francis told the churchmen in the Hall of Blessings of the Apostolic Palace.

Francis has long used his Christmas address for an annual dressing down of Vatican bureaucrats, taking them through a typical Jesuit-style "examination of conscience" to help them repent in the run-up to Christmas.

His most blistering critique came in 2014, when he listed the "15 ailments of the Curia" that some suffered, including the "terrorism of gossip," ″spiritual Alzheimer’s" and of living "hypocritical" double lives. The following year, Francis offered an antidote to the sins by listing the "catalog of virtues" he hoped they would instead follow, including honesty, humility and sobriety.

This year was similar in tone, and Francis reprised his critique of forms of abuse that even religious people use against one another.

Beyond that, Francis appeared to also want to take broader aim at arch-conservatives and traditionalists who have become the pope's biggest critics. Francis blasted their way of living the faith, insisting that being Catholic doesn't mean following a never-changing set of dicta but is rather a "process of understanding Christ’s message that never ends, but constantly challenges us."

"True heresy consists not only in preaching another gospel, as Saint Paul told us, but also in ceasing to translate its message into today’s languages and ways of thinking," Francis said.

Traditionalist Catholics have denounced Francis’ emphasis on mercy and openness to doctrinal wiggle room on issues such as sacraments for divorced and civilly remarried Catholics. Some have even gone so far as to accuse him of heresy for some of his gestures and preaching, including allowing "pagan" statues in the Vatican.

A young boy runs up to Pope Francis during the general audience on August 17, 2022. Video: Vatican media handout

Francis dedicated the bulk of his speech this year to the need to be vigilant about the work of the devil, picking up a theme he recently discussed during his weekly catechism lessons with the general public.

He told the Vatican bureaucrats it’s not enough to merely condemn evil or root it out, since it often comes back in different guises, stronger than before. Francis used the term "we" repeatedly, suggesting he includes himself among those in the Vatican who must remain mindful of the devil in their midst.

"Before, it appeared rough and violent, now it shows up as elegant and refined," he warned. "We need to realize that and once again to unmask it. That is how these ‘elegant demons’ are: they enter smoothly, without our even being conscious of them," he said.

Francis told the story of a 17th century convent in Port Royal, France, where the superior, Mother Angelique, had charismatically reformed herself and her monastery after evil crept in, but the devil came back in the form of a rigid faith.

"They had cast out the demon, but he had returned seven times stronger, and under the guise of austerity and rigor, he had introduced rigidity and the presumption that they were better than others," Francis warned.

Some of Francis' critics themselves were in the audience along with his supporters. Returning to the annual Christmas ceremony was Cardinal Angelo Becciu, whom Francis fired in 2020 and stripped of his rights as a cardinal after the pope accused him of financial misconduct.

Becciu is currently on trial, along with nine other people, in the Vatican criminal court and denies wrongdoing. Francis recently allowed him to resume participating in Vatican ceremonies, a sign the pope thinks he perhaps jumped the gun in sanctioning Becciu before a court ruled on his guilt or innocence.