ROME (AP) - Pope Francis was discharged from a Rome hospital and returned home to the Vatican on Wednesday, 10 days after undergoing surgery to remove half his colon.

Francis, 84, stopped at St. Mary Major Basilica to give thanks for the success of the operation and pray for others before returning home, the Vatican said. The pope always visits the basilica after a foreign trip to pray at a beloved icon of the Virgin Mary.

After the detour to the basilica, his small motorcade approached a side entrance to the Vatican and stopped before reaching the gate, where Francis got out with the help of a bodyguard. He greeted some Italian security guards — two army soldiers and a handful of Italian police motorcycle escorts — and got back in the car, which then proceeded through the Perugino gate.

The Vatican hotel where Francis lives is located just inside the gate.

Francis had half of his colon removed on July 4 for a severe narrowing of his large intestine, his first major surgery since he became pope in 2013. It was a planned procedure, scheduled for early July when his audiences are suspended anyway and Francis would normally take some time off.

Vatican spokesman Matteo Bruni confirmed Francis' return from the hospital and visit to the basilica. Praying before the icon, Francis "expressed his gratitude for the success of his surgery and offered a prayer for all the sick, especially those he had met during his stay in hospital," Bruni said in the statement.

Francis will have several more weeks to recover before traveling again in September. There are plans for him to visit Hungary and Slovakia from Sept. 12-15, and then make a quick stop in Glasgow, Scotland, in November to participate in the COP26 climate conference. Other possible trips are also under review. 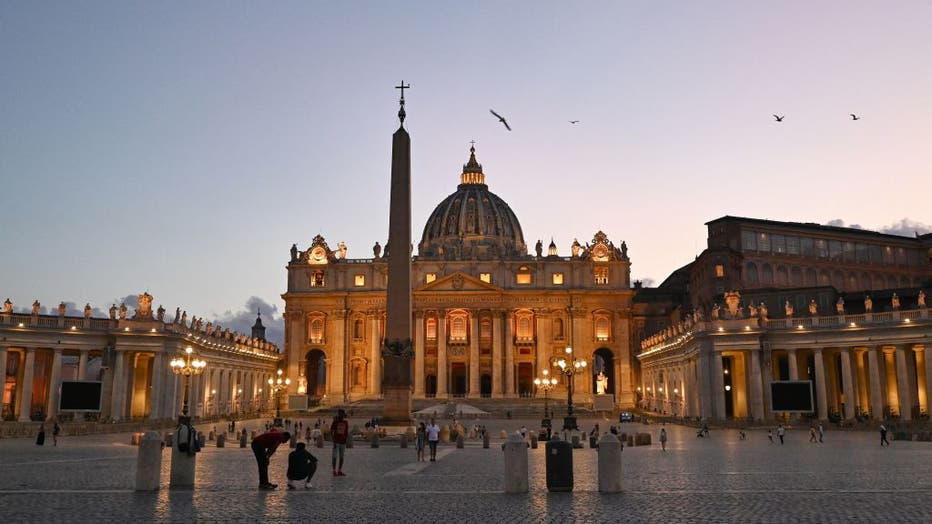 People walk in St. Peter's Square after Pope Francis, hospitalized at the Policlinico A. Gemelli Hospital in Rome, arrived in the early afternoon to undergo surgery on July 4, 2021. (Photo by ANDREAS SOLARO/AFP via Getty Images)

The Vatican had originally said Francis could be discharged last weekend, but later said he would stay a few extra days for further recovery and rehabilitation therapy.

His discharge, which was not announced in advance, was greeted with joy and prayers by visitors to St. Peter's Square, who said they wished for his continued recovery and Italy's recovery from the pandemic.

"I'm happy the pope has left Gemelli hospital and has come back to his ‘world,’ among us faithful, to hopefully bring us a lot of serenity," said Rome resident Andrea Castellani.

The surgery had caught many Vatican watchers off guard: Francis had shown no signs of the pain that often accompanies the intestinal problem he had, and even had a busy week before the operation.

The Argentine pope had part of one lung removed when he was a young man but otherwise has enjoyed relatively robust health, with the exception of sciatica nerve pain that has flared recently.

The Vatican gave consistently reassuring daily updates about his recovery, saying it was proceeding as planned. Francis had one episode of fever three days after the operation, but the Vatican said diagnostic tests and scans showed no problems.

The pope had appeared for the first time in public since the surgery on Sunday, looking in good form as he delivered his weekly prayer from the 10th floor hospital balcony, surrounded by young cancer patients. He used the occasion to call for free health care for all.

On Tuesday afternoon, he visited the pediatric cancer ward, which is on the same 10th floor as the papal hospital suite.

Once home, Francis' official Twitter account @Pontifex posted an update: "I thank all those who have been close to me with prayer and affection during my hospital stay. Let us not forget to pray for the sick and for those who assist them," it said.