The blue and yellow Ukrainian flag flew over Lyman Saturday, a day after Russia claimed the territory as its own. FOX's Trey Yingst reports.

VATICAN CITY - Pope Francis on Sunday appealed to Russian President Vladimir Putin for a cease-fire, imploring him to "stop this spiral of violence and death" in Ukraine and denouncing the "absurd" risk of the "uncontrollable" consequences of nuclear attack as tensions sharply escalate over the war.

Francis uttered his strongest plea yet about the seven-month-old conflict, which he denounced as an "error and a horror."

It was the first time in public that he cited Putin's role in the war. The pontiff also called on Ukrainian President Volodymyr Zelenskyy to "be open" to serious peace proposals.

Francis told the public, gathered in St. Peter's Square, that he was abandoning his usual religious theme for his Sunday noon remarks to concentrate his reflection on Ukraine. 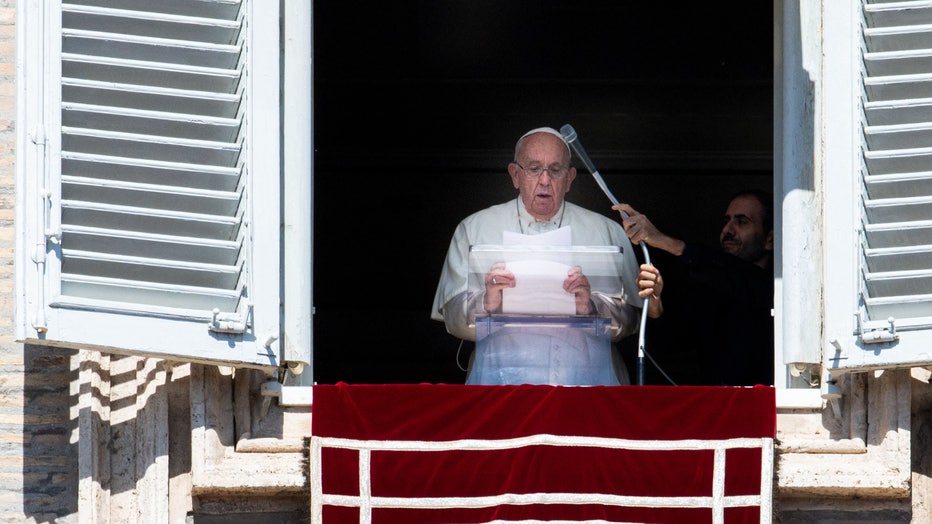 Pope Francis prepares to speak from the window of the Apostolic Palace during the weekly Angelus prayer on October 2, 2022 in The Vatican. (Photo by LAURENT EMMANUEL/AFP via Getty Images)

"How the war is going in Ukraine has become so grave, devastating and threatening that it sparks great worry," Francis said.

"In fact, this terrible, inconceivable wound of humanity, instead of shrinking, continues to bleed even more, threatening to spread," the pope said.

"I deplore strongly the grave situation created in the last days, with further actions contrary to the principles of international law," Francis said, in a clear reference to Putin's illegal annexation of a large swath of eastern Ukraine. "It, in fact, increases the risk of a nuclear escalation, to the point of fearing uncontrollable and catastrophic consequences on the world level."

"Rivers of blood and tears spilled these months torment me,'' the pope said. "I am pained by the thousands of victims, in particular among the children, and by so much destruction, that leaves many persons and families homeless and threatens vast territories with cold and hunger,'' he said.

"Certain actions can never be justified, never,'' the pope said. He didn't elaborate. But Putin sought to justify launching the invasion saying he needed to protect his country from what he called "Nazi" elements in Ukraine.

"It's anguishing that the world is learning the geography of Ukraine through names like Bucha, Irpin, Mariupol, Izium, Zaporizhizhia and other places, that have become places of indescribable sufferings and fears,'' Francis said.

"And what to say about the fact that humanity finds itself again faced with atomic threat? It's absurd,'' Francis said, who then called for an immediate cease-fire. 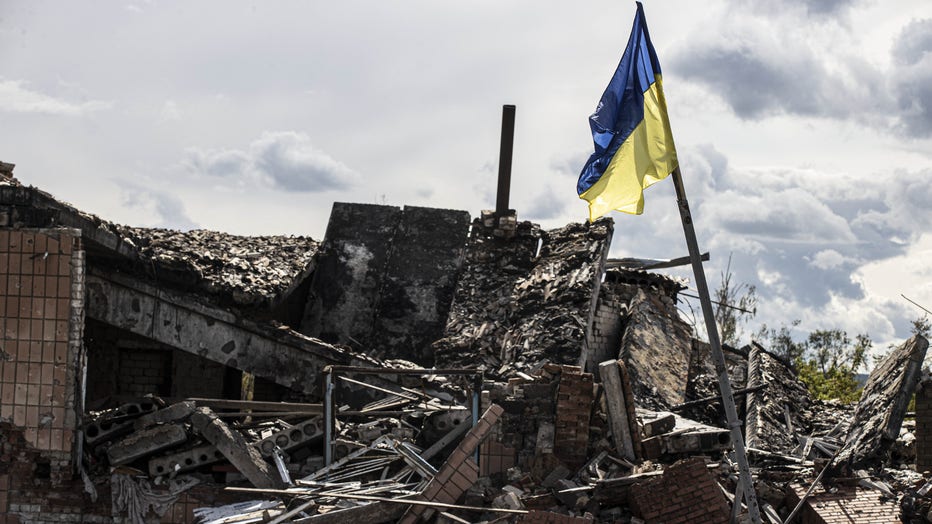 Ukrainian flag waves in a residential area heavily damaged in the village of Dolyna in Donetsk Oblast, Ukraine after the withdrawal of Russian troops on September 24, 2022. (Photo by Metin Aktas/Anadolu Agency via Getty Images)

"My appeal is directed above all to the president of the Russian Federation, imploring him to stop, also for the love of his people, this spiral of violence and death,'' Francis said. "On the other side, pained by the immense suffering of the Ukrainian people following the aggression undergone, I direct a similarly trusting appeal to the president of Ukraine to be open to serious proposals of peace,'' Francis said.

It is rare for the pope to single out leaders in his frequent appeals for an end to violent conflicts. In doing so, Francis signaled his extreme worry over the deteriorating situation.

"May arms cease and conditions be searched for to start negotiations able to lead to solutions not imposed by force but agreed upon, just and stable,'' Francis said. "And they will be thus if they are based on respect for the sacrosanct value of human life, as well as on the sovereignty and the territorial integrity of every country, as well as the rights of minorities and of legitimate concerns." 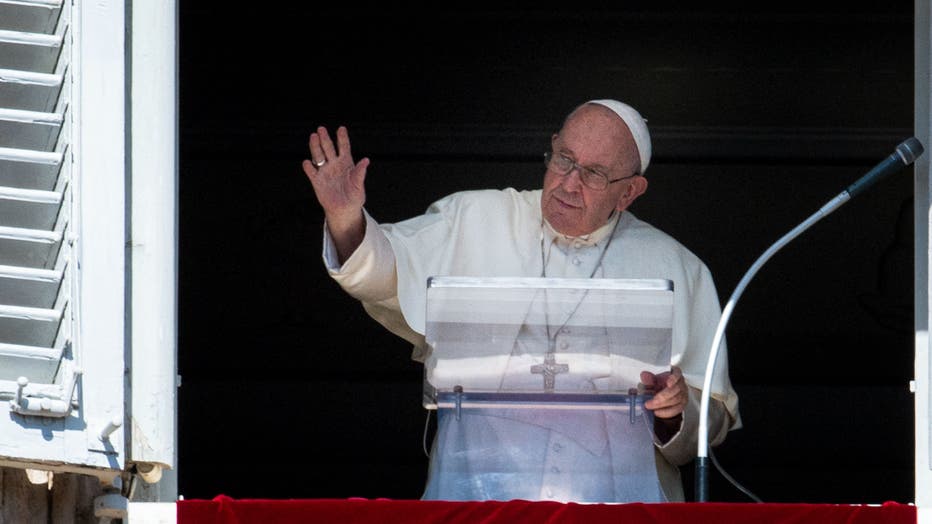 Pope Francis waves from the window of the Apostolic Palace during the weekly Angelus prayer on October 2, 2022 in The Vatican. (Photo by LAURENT EMMANUEL/AFP via Getty Images)

Invoking God’s name and the "sense of humanity that lodges in every heart," he renewed his many pleas for an immediate cease-fire.

Without elaborating, Francis also called for the "recourse to all diplomatic instruments, including those so far possibly not utilized, to end this immense tragedy."

"The war itself is an error and a horror,'' the pontiff lamented.

Throughout the war, Francis has denounced the recourse to arms. But recently, he stressed Ukraine's right to defend itself from aggression. Logistics complications have frustrated his oft-stated hope to make a pilgrimage to Ukraine to encourage peace efforts.