TACOMA, Wash. - Wildfire smoke lingers on throughout the region and people are feeling the impacts from the unhealthy conditions. It caused another day of closures and postponements across the Puget Sound, including COVID-19 testing.

Pierce County government postponed coronavirus testing for the second day in a row due to poor air quality. County officials said Wednesday’s services were postponed for the safety of staff and those coming in for free testing. For now, mobile coronavirus testing for Thursday in Pierce County is scheduled as normal, but people are encouraged to check the county’s calendar for changes.

The Snohomish Health District also closed testing sites, Wednesday, and paused registration for the rest of the week until the air clears up. Officials said those who already registered don’t need to make a new appointment – just bring in the exiting testing ID number when sites reopen.

United Way of King County canceled two U.S. Census events in Tukwila and SeaTac, Wednesday. The group was planning to host the events outdoors– providing food, games and assistance in completing the census. With the smoke continuing to linger in the air, United Way said it had to cancel because of the serious risk to everyone’s health. 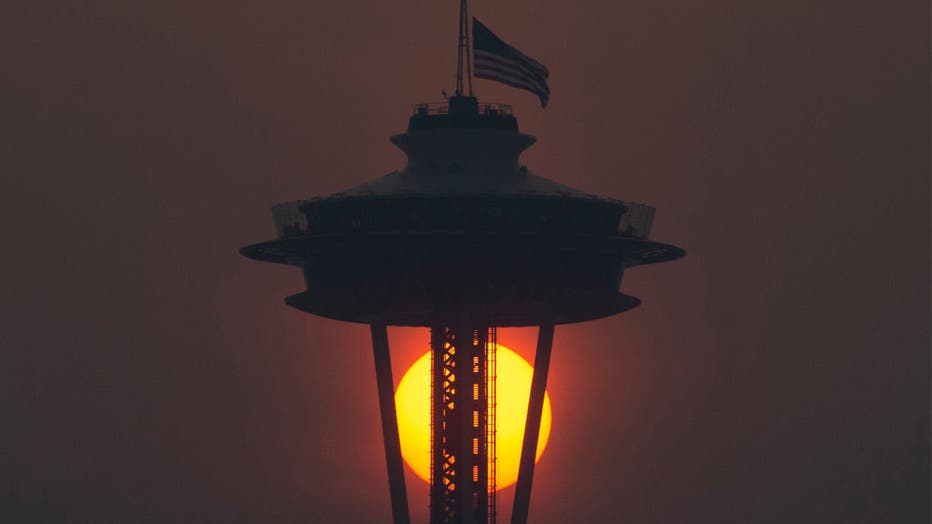 SEATTLE, WA - SEPTEMBER 11: The Space Needle flies an American flag at half-mast in remembrance of the September 11 attacks as the sun sets through wildfire smoke on September 11, 2020 in Seattle, Washington. (Photo by Lindsey Wasson/Getty Images)

The City of Seattle extended its closure of parks, beaches, boat ramps and playfields through Wednesday night. Officials said there won’t be any citations issued. They are urging everyone to stay indoors if they’re able and avoid outdoor activities in the unhealthy air.

Smoke can get in the eyes, lungs and sinuses. The Tacoma Pierce County Health Department said it can worsen symptoms or increase the risk of COVID-19. Officials are encouraging people to find clean air spaces or shelters, limit time outdoors and drink plenty of water.