The scientific secrets found in orca scat, and how dogs help

The absence of southern resident orcas in inland waters this year is stalling the science researchers say help shape policy, but it also shows what they already know: There's not enough food -- and their poop proves it.

SAN JUAN ISLANDS, Wash. -- The absence of southern resident orcas in inland waters this year is stalling the science researchers say help shape policy, but it also shows what they already know: There's not enough food -- and their poop proves it.

Eba, a rescue dog owned by researcher Deborah Giles, has a nose for orca scat. She proved it the first weekend in July when the southern residents came inland for two days before jetting back out to the ocean.

Since 2006, University of Washington researcher Samuel Wasser has been studying southern resident scat. The samples spell out the health of the endangered orcas. From it, they can tell to which orca the feces belongs, whether that orca is pregnant, starving and how much toxins are circulating through the system. A dog's heightened senses make the research more successful.

Giles has driven the research boat for this project for about a decade.

"Ultimately, being able to collect these fecal samples at a distance where we're not stressing out the individuals is another really important part of this study," Giles said.

That's where Eba comes in. 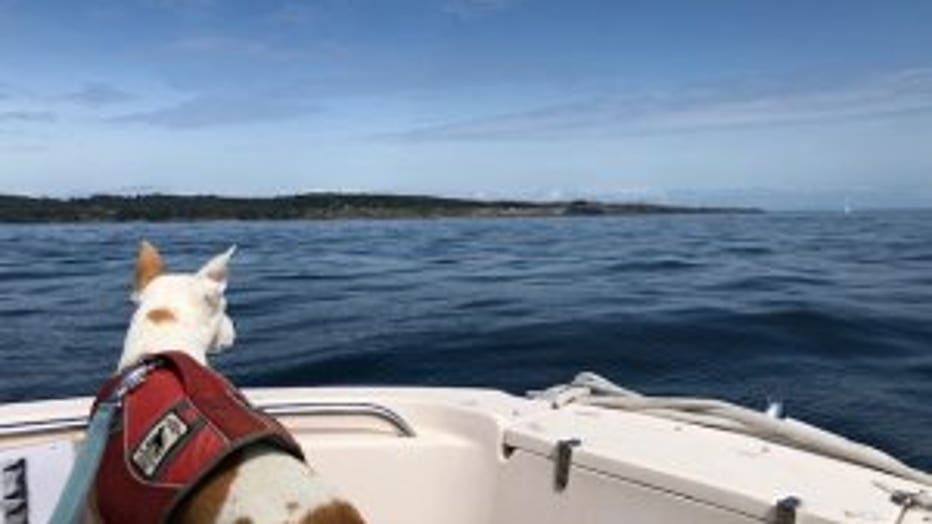 "Imagine, you're out on the ocean and you're looking for a poop floating in the water in this huge area, well how do you find it?" Wasser said. "All of a sudden, Eba jumped up and runs to the bow of the boat and what that told us was she had the scent. We never would have known there was a scat there."

This was Eba's second day on the job. The project used to use trained detection dogs from Conservation Canines, but the unpredictability of the orcas' presence is pushing them to get creative with Giles' personal dog, who will always be available on the island at a moment's notice. So far, she's shown she has the nose for it.

The scat she will detect tells a story about the biggest stressors facing this population by testing stress hormone levels, or cortisol.

"When the fish are most abundant is also when the boats are most abundant, so there's two things that cause your stress hormone to go high," Wasser said. "If boats were driving the stress physiology, you would expect the cortisol levels to go up and fall with the boats."

But the data points to the opposite. Wasser said the biggest determining factor for cortisol levels is food, not boats. When boats are abundant, stress is still low because food is also abundant. But when food is scarce, that's when stress hormones peak. It's also when they notice the most toxins being circulated through the body and, in turn, in fecal samples.

Wasser said too much focus is put on boats and toxins as a threat, which their studies show are not as big of an issue when there's plenty of food.

Fecal samples have also been able to paint a clearer reproductive picture of the challenged southern residents. Since they have identified a pregnancy marker in the poop, they know when orcas are pregnant, which means they know when miscarriages take place.

"Over time, we were able to show that they were indeed conceiving, but 69 percent of the females were spontaneously aborting their conceptions," Wasser said. "When we compared the nutritional health, based on hormones, of the whales that aborted versus went to term, the ones that aborted had far poorer nutrition and higher toxin loads in their scats, especially when food was scarce."

"Being able to take this science, super-applied science, and put it into the hands of policymakers is really important," Giles said.

It's near impossible, however, when the endangered orcas are not here.

For two days so far this summer, Wasser, Giles and Eba did get to study the southern residents.

"I was so excited to get out there and see who was there," Giles said.

But it's who wasn't there, two starving whales and all of L pod, that have them worried.

"If you don't collect data, then you don't know what's going on," Wasser said. "When you're not seeing them, does that mean they're starving? Or do they just have another food source and so they don't need to come in here?"

Researchers believe the southern residents are spending most of their time out west in the ocean. At least one research group, the Center for Whale Research, is shifting its decades-old practice to include ocean observation because of the orcas' changing patterns. But choppy, open waters make it a lot harder to study the species than more inviting inland waters.