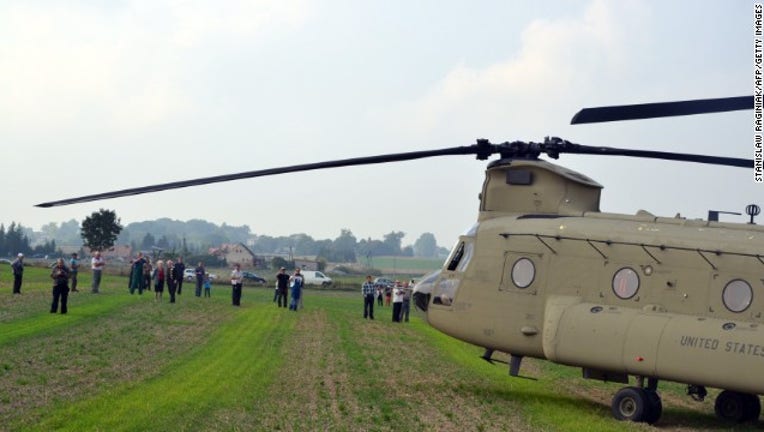 Villagers look at the U.S. helicopters and their crews. Six other U.S. helicopters also made unplanned landings in the nearby village of Nowa Wies because of the weather.(Photo: STANISLAW RAGINIAK/AFP/Getty Images)

(CNN) -- When a flight of military helicopters descended into a field in the small village of Gruta, Poland, residents had reason to be alarmed.

After all, the village is only about 100 miles from the Russian enclave of Kaliningrad. And with current tensions between Poland and its NATO allies and Russia over the situation in Ukraine, well, it would be natural to worry.

But it turned out this was more treat than threat.

The six copters were U.S. Army. The five Black Hawks and one Chinook were on their way back to their temporary base in Poland from NATO exercises in Lithuania when bad weather forced them to land Tuesday in the Gruta field, a Polish military spokesman told Bloomberg News.

Whoever could in the village of 1,600 people flocked to the scene, according to the town's website, chatting with the U.S. troops and posing for pictures.

"It's a big treat to be able to see up close such a colossus," the website said of the twin-rotor CH-47 Chinook.

Town residents posed for pictures with the troops and the machine.

"Thank God it was the Americans," the town's mayor, Halina Kowalkowska, told Bloomberg. But she said the town's excitement may have made residents forget their hospitality.

"Now, when I think about it, we could have served them some food, but we were in shock and the boys had to go," Bloomberg quoted her as saying.