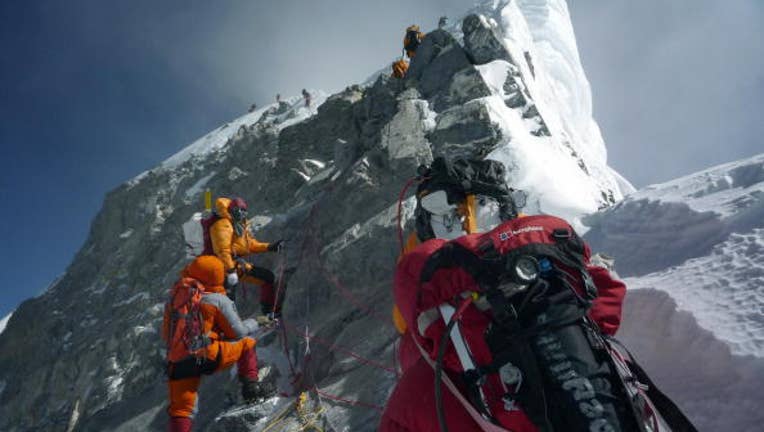 Unidentified mountaineers walk past the Hillary Step while pushing for the summit of Everest on May 19, 2009, as they climb the south face from Nepal.

NEPAL (CNN) -- The world saw another side of Nepalese mountaineering in April last year when a brawl was reported between European climbers and Sherpas 22,000 feet up Mount Everest.

Now Nepalese authorities plan to station security officials at the base of the world's highest peak from the spring climbing season beginning in March.

Up to nine officers from the police and army will be sent to the mountain to try to resolve conflicts on the spot rather than having to appeal to authorities in Kathmandu.

"The police will be the state's representative at the mountain to verify incidents that have to be reported to the authorities," said Dipendra Poudel, a mountaineering official.

"It's our effort to make mountaineering respectable."

The Swiss mountaineer Ueli Steck and the Italian Simone Moro were ascending Everest by a new route last April when they were reportedly confronted by a group of Sherpas laying ropes for other climbers who accused them of getting in the way.

The Europeans said the Sherpas threatened and then attacked them, including throwing rocks.

The Sherpas said the climbers had caused ice to drop on them and had ignored requests not to advance until the ropes had been laid.

The issue was resolved after a meeting mediated by a Nepalese army official leading an expedition.

With police at base camp, Nepalese liaison officers -- who accompany expeditions to ensure they abide by local laws -- will no longer have to report incidents at the nearest police station a seven-day trek away, said Gyanendra Shrestha, who has worked as such an officer.

Beginning this year, the Nepalese government will also have a secretariat headed by a civilian at Everest base camp, to which security officials will report.

"We plan to have a meteorologist and communications expert at the secretariat, too," Poudel said.