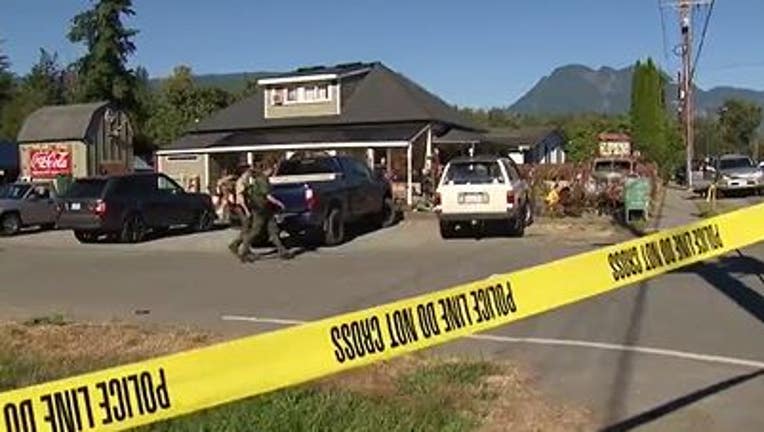 SULTAN, Wash. - A Sultan man was booked into Snohomish County Jail for second-degree murder after allegedly shooting a family friend several times as he was walking away, killing him. Deputies said the suspect walked up to the man, who was already collapsed on the ground, and shot him again.

Snohomish County deputies say the shooting occurred around noon on Saturday at a home at the corner of Stevens Pass Hwy and 367th Ave. SE.

During the investigation, deputies learned that a family member was in the process of filling out paperwork for a no-contact order against the 23-year-old suspect, who lives in a shack on the property behind the family member's house. That family member called a friend over on Saturday to be present while she was filling out the paperwork.

Court documents say the suspect was harassing the family member in the span of two days before the shooting.

When the 39-year-old friend tried to go inside the woman's house, the 23-year-old suspect confronted him at the door and a fight broke out, deputies said. Both men then exited the home and walked to a parking lot inside.

Surveillance video shows the victim and the suspect talking to each other outside, approximately 10 to 15 feet apart. The 39-year-old victim then turned around and began walking away from the suspect.

Deputies say as the man was walking away, the suspect fired at him several times. The man then collapsed on the ground, deputies said.

According to investigators, the 23-year-old suspect walked over to the victim on the ground and shot him again. The 39-year-old died at the scene.

The suspect was taken to the Snohomish County Jail and booked for second-degree murder. Bail was set at $1 million.

A man is dead in Snohomish County, following what investigators called a domestic violence situation.