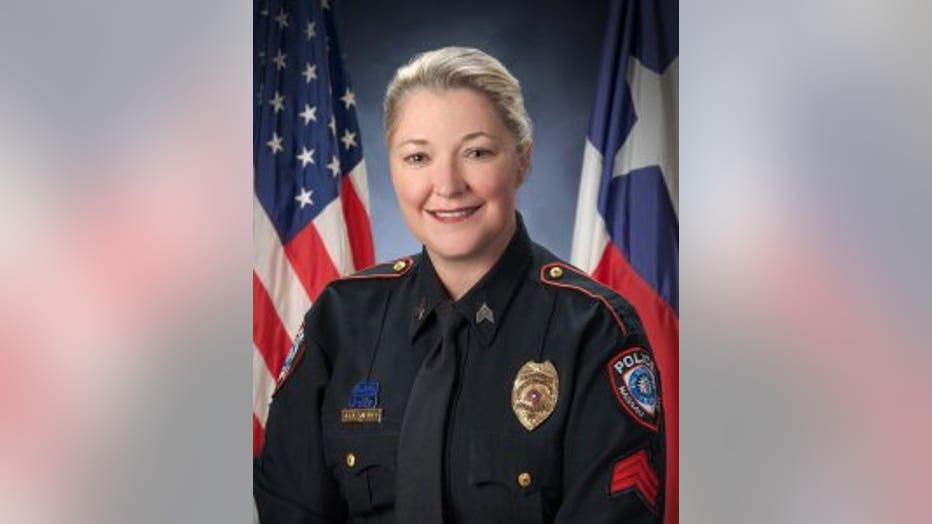 HOUSTON -- A Houston-area police sergeant was killed when a man wanted on a domestic violence warrant broke free from police while being handcuffed, fled from a traffic stop and struck her with his vehicle, police said.

The search continued Wednesday for 21-year-old Tavores Henderson, who police said likely still has one handcuff attached to his wrist. Harris County Sgt. Dennis Wolfford said a warrant for felony murder had been issued for Henderson.

“Turn yourself in. We will eventually catch up to you,” Wolfford said Wednesday.

Police were in the process of handcuffing and arresting Henderson when he escaped the officers and got into his vehicle, Cromie said.

Henderson then drove off, striking Sullivan, who later died at a hospital, Cromie said. The vehicle was discovered abandoned and police believe he ran away. Later Wednesday morning, police and SWAT officers searched a home where Henderson’s mother lived, but Henderson was not there, Wolfford said.

Authorities are offering a $20,000 reward for information leading to Henderson’s arrest, Crime Stoppers of Houston said.

Sullivan, 43, was approaching her 16-year anniversary with the Nassau Bay Police Department and had worked on the night shift, Cromie said, calling her “a consummate professional in police work.” Nassau Bay is located about 25 miles southeast of Houston and has about 4,000 residents.

Wolfford said it is likely the felony murder charge against Henderson will be upgraded to capital murder.

The Harris County Sheriff’s Office was leading the search for Henderson. Sheriff Ed Gonzalez said Sullivan’s death was “another grim reminder” of how dangerous police work can be, noting that the community is still mourning the death of a Houston police officer on Saturday and the September shooting death of a Harris County deputy.

According to court records, the Henderson’s misdemeanor arrest warrant is from an alleged assault of his ex-girlfriend. Authorities say Henderson grabbed and scratched her as he tried to kidnap her Sunday.

Henderson was accused of choking his ex-girlfriend and threatening to shoot her in November 2018, leading to a felony aggravated assault-family member charge.

Henderson is a Houston rapper who performs under the stage name Killah Dre.

When he was released in July on the $50,000 bond, Henderson posted a video on Instagram in which he flashed a fan of $20 bills right after he was released from custody, saying, “you all thought the kid wasn’t coming home, huh.”

In a tweet on Wednesday, Harris County Sheriff’s Office Major Mike Lee called Henderson a “coward” and criticized him for “bragging about how cash bonds can’t keep him in jail.”