SEATTLE – Police are looking into a potential spike in drugged drinks being reported on social media in the Capitol Hill neighborhood. Police said they are hearing concerns from bar patrons and owners, but currently have no substantiated reports.

David Choe said he didn’t call police when it happened to him, because he wasn’t sure what had happened.

“I wasn’t drunk, but I was absolutely out of it,” said Choe. “My motor skills were out the window. It was very frustrating.”

Choe was drinking in a Capitol Hill bar last month alone, when he said he was targeted by another man at the bar.

In between two shots of whiskey, Choe said he left his drink and went outside for some fresh air.

“I came back in, took the second one, went back out and I took my phone out and I kept dropping it,” said Choe.

He said in a matter of minutes, something took over his system.

“I was getting mad at myself, like why am I so messy? Why am I so drunk? I only had two shots.”

He said he was in danger.

“As soon as I knew, it’s one of those fight or flight things, I got to get out of here.”

It’s a common story that has been popping up in Capitol Hill, according to bar owners and police.

“I have had two incidents in the last three years since I have owned this bar -- and they were all last month,” said Ian Carey.

Carey, owner of Bar Sue in Capitol Hill, said that the problem has grown so much that he invested in testing strips for date-rape drugs. The 30-cent strip tests for the two most common types of drugs used, ketamine and GHB. If it’s present, the strip will turn blue; if not, it shows a greenish yellow.

“I made them available at the bar for anybody, no questions asked,” he said. 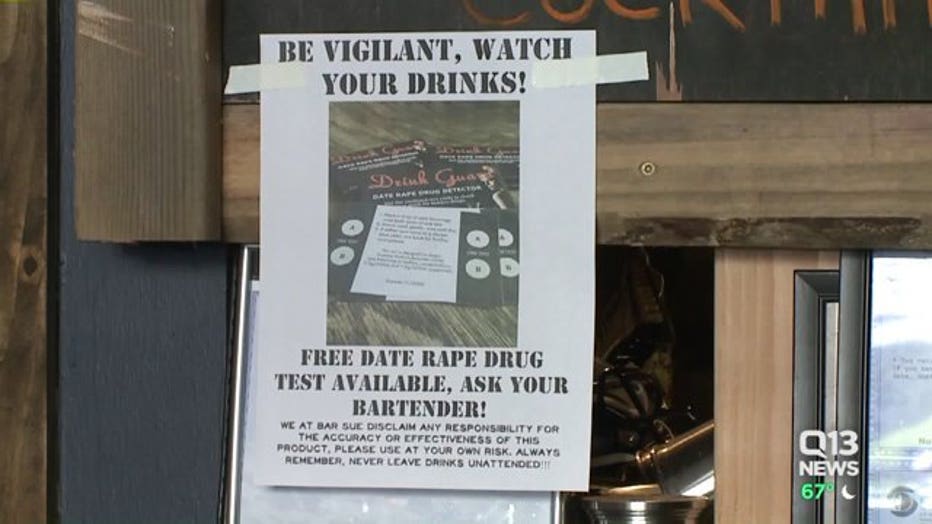 Carey is now in talks with other bar owners in the neighborhood. A bulk order of strips, he said, could stop the problem. He said he can’t wait for police to catch the predators.

“We have heard from a variety of different sources that there is concern about the possibility of drinks being tampered with, people being drugged while they are out at nightclubs, bars, etc.,” said Detective Mark Jamieson with Seattle Police.

“We need these incidents reported to us for us to begin an investigation,” said Jamieson, adding that so far police do not have any reports filled.

Police told Q13 News that they need people like Choe to call them and go to the hospital for testing immediately, before traces of the drug are gone. The problem with that, said Choe, is that you may not know what has happened to you until hours or even days later.

“As a straight male living in this particular neighborhood, which I love,” said Choe, “it’s kind of hard for me to imagine that it would happen to a straight guy. So there was a big doubt in my mind.”

Police said they are watching all of Seattle, not just Capitol Hill, for cases, but Carey said it’s his neighborhood that needs the protecting now.

“I don’t want to wait around,” said Carey. “These don’t get reported; I am the one who hears about it. So I am the one taking this on headfirst, trying to do what I can to keep people safe.”

Carey said he hopes to get the strips down from 30 cents to 10 cents with a bulk order from multiple bars. He said every owner he has talked to has been in support of the strips.

Police are telling people to not leave their drinks unattended at any bar, and stay with groups of friends. If anyone believes they have been the victim of this crime, they should contact police immediately and start a report.