SHORELINE -- If your mail package was stolen off your front porch this holiday season, it might just be waiting for you at the Shoreline Police Department.

Police recently arrested two people in a stolen car that was full of  stolen goods. 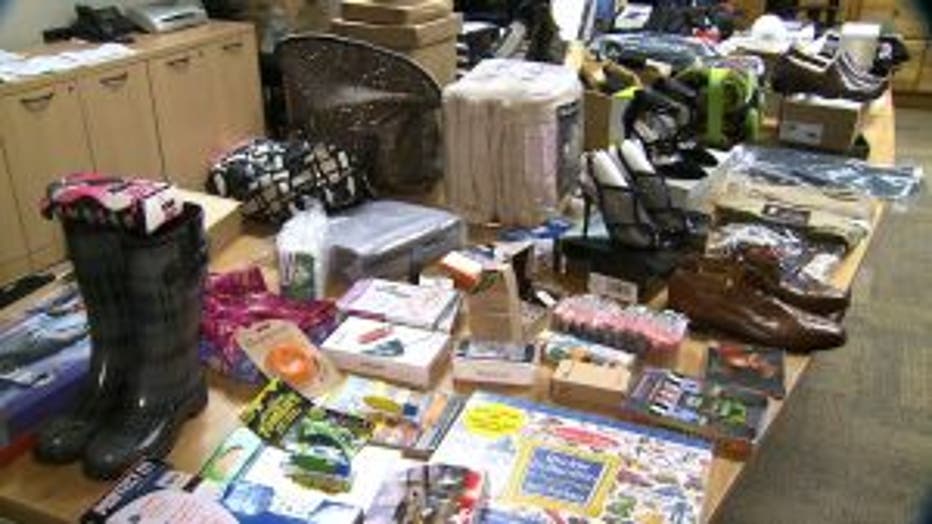 Shoreline police say about 100 different packages were stolen in the past month, the vast majority, if not all, of those packages were taken from Seattle's Ballard neighborhood.

On Friday, a room at the Shoreline Police Department looked like a retail store.

“There are a lot of camera equipment with some lenses,” detective Cary Coblantz said.

Everything from toys, shoes and clothes are unclaimed.

“We are trying to do our best to identify the victims so they can get their stuff back,” Coblantz said.

People like Maria MacGregor, who had two packages stolen from her front porch.

“I was actually surprised that they called me back just three or four days later letting me know that they thought they recovered my boots,” MacGregor said.

But Maria was easy to track down -- her shipping label was still on the box. But that is not the case for most of the recovered items.

“It was fairly amazing when I opened the trunk of the car,” Coblantz said.

The car was packed with from top to bottom, and police say suspsect David Palacio is behind it. Police say Palacio and another person used a stolen car to move the loot. When officers spotted the Jetta last week, Palacio led police on a chase before crashing into a garage.

“I think it’s renewed my belief in karma, if anything,” MacGregor said.

MacGregor says it’s good the suspect is locked up, but from now on she isn't taking any chances.

“I am delivering everything to work because I can make sure someone is actually there to sign for it and it’s not going to be taken,” MacGregor said.

Surveillance video shows how thieves can make off with your package in seconds.

But at least in this one case, police can make it right.

“We’ve run into that a couple of times and told them what they are getting for Christmas,” Coblantz said.

A lot of the recovered items have been reunited with the owners or shipped back to the company. But dozens of goods are still unclaimed so if you live in Ballard and you lost a package in the last month give Shoreline police a call or email Coblantz at Cary.Coblantz@kingcounty.gov.