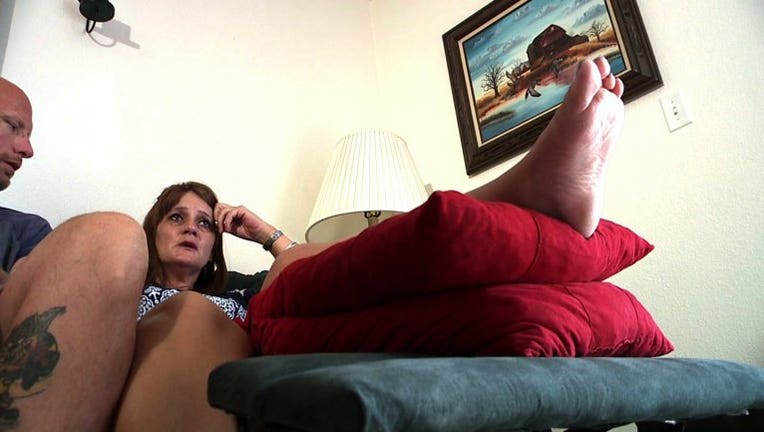 LONGMONT, Colo. — A man and a woman called police to report a child left in a hot car, but they say they ended up getting run over by that child’s mother moments later.

FOX 31 in Denver spoke with Shannon Dominguez, who is now confined to a wheelchair, and her boyfriend Alan Mason.

“My tibia has a spiral break. My fibula has three breaks in it. They put a rod in there,” Dominguez told FOX 31. “Every day is a chore. Every day is stressful.”

The boy’s mother, Kristina Riddell, is charged with hitting the couple with her car in the parking lot of a Dollar Tree store in Longmont Colorado after they called 911 to report the child in the car.

“All four windows were rolled up. And it was in the direct sun. It scares the heck out of me. It’s some innocent child might die,” says Dominguez. “She heard me on the phone with police.”

Dominguez says Riddell got mad, threatened to beat her up and punched Mason in the face.

Dominguez says they were standing in an empty parking space when Riddell then got in her car, backed up and accelerated towards them, hitting Dominguez first, then Mason.

He went over the hood.

“She had her windows down, so I grabbed onto the door. She drug me about 20 feet. I realized she was not going to stop, so I let go. I tumbled in the parking lot,” says Mason. He suffered internal and external bruising.

Riddle was arrested at her home nearby and now faces charges including hit-and-run and child abuse. The 27 year old has a criminal record including arrests for assault, domestic violence and multiple driving violations.

FOX 31 stopped by Riddle’s home for comment, but she wasn’t there.