WILMINGTON, N.C. -- The police chief of a barrier island in the bull's-eye of Hurricane Florence is warning any stragglers who refused to evacuate that they are making a dangerous choice.

At a news conference just across the bridge in Wilmington, Wrightsville Beach Police Chief Dan House said a handful of residents on the island have refused evacuation orders. He's telling them they "better go ahead and give me your next of kin" information, because no one will rescue them at the height of the storm.

The police chief says he's not going to put his people in harm's way, especially for people they've already told to evacuate. The latest forecast shows the eye of Florence could pass directly over the barrier island, pushing a huge surge of ocean water. 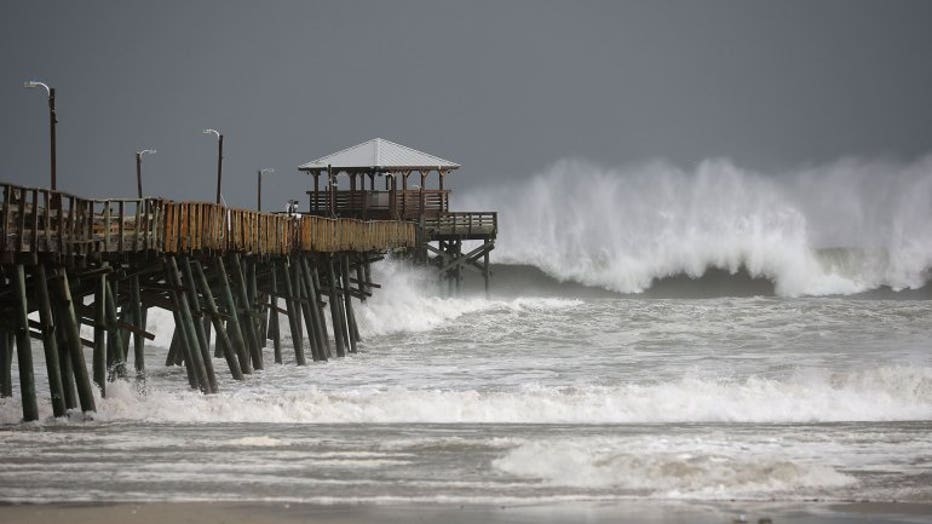 Waves crash around the Oceana Pier as the outer edges of Hurricane Florence being to affect the coast September 13, 2018 in Atlantic Beach, United States. Coastal cities in North Carolina, South Carolina and Virgnian are under evacuation orders as th


The outer bands of wind and rain from a weakened but still lethal Hurricane Florence began lashing North Carolina on Thursday as the monster storm moved in for a prolonged and potentially catastrophic drenching along the Southeast coast.

Florence's winds had dropped from a peak of 140 mph (225 kph) to 105 mph (165 kph) by midmorning, reducing the hurricane from a terrifying Category 4 to a 2. But forecasters warned that the widening storm — and its likelihood of lingering around the coast day after day — will bring seawater surging onto land and torrential downpours.

"It truly is really about the whole size of this storm," National Hurricane Center Director Ken Graham said. "The larger and the slower the storm is, the greater the threat and the impact — and we have that."

As of 11 a.m. EDT, Florence was centered about 145 miles (230 kilometers) southeast of Wilmington, its forward movement slowed to 10 mph (17 kph). Hurricane-force winds extended 80 miles (130 kilometers) from its center, and tropical-storm-force winds up to 195 miles (315 kilometers).

Forecasters said Florence's eye could come ashore early Friday around the North Carolina-South Carolina line. Then it is likely to hover along the coast Saturday, pushing up to 13 feet (nearly 4 meters) of storm surge and unloading water on both states.

By midday, Spanish moss blew sideways in the trees as the winds increased in Wilmington. On North Carolina's Outer Banks, water flowed through streets and between beachfront homes, and some of the few people still left in Nags Head took photos of angry waves topped with white froth.

The forecast calls for as much as 40 inches (102 centimeters) of rain over seven days along the coast, with the deluge continuing even as the center of the storm pushes its way over the Appalachian Mountains.

The result could be what the Houston area saw during Hurricane Harvey just over a year ago: catastrophic inland flooding that could swamp homes, businesses, farms and industrial sites.

The police chief of a barrier island in Florence's bulls'-eye said he was asking for next-of-kin contact information from the few residents who refused to leave.

"Don't relax, don't get complacent. Stay on guard. This is a powerful storm that can kill. Today the threat becomes a reality," he said.

Weather Underground meteorology director Jeff Masters said Florence eventually could strike as a Category 1 with winds less than 100 mph (160 kph), but that's still enough to cause at least $1 billion in damage. Water kills more people in hurricanes than wind does.

Scientists said it is too soon to say what role, if any, global warming played in the storm. But previous research has shown that the strongest hurricanes are getting wetter, more intense and intensifying faster because of human-caused climate change.

It's unclear exactly how many people fled ahead of the storm, but more than 1.7 million people in the Carolinas and Virginia were warned to clear out.

Airlines canceled about 1,200 flights and counting, and some airports in the Carolinas virtually shut down. Home Depot and Lowe's activated emergency response centers and sent in around 1,100 trucks to get generators, trash bags and bottled water to stores before and after the storm.

Duke Energy, the nation's No. 2 power company, said Florence could knock out electricityto three-quarters of its 4 million customers in the Carolinas, and outages could last for weeks. Workers are being brought in from the Midwest and Florida to help in the storm's aftermath, it said.

Florence's weakening as it neared the coast created tension between some who left home and authorities who worried that the storm could still be deadly.

Frustrated after evacuating his beach home for a storm that has since been downgraded, retired nurse Frederick Fisher grumbled in the lobby of a hotel in Wilmington several miles inland.

"Against my better judgment, due to emotionalism, I evacuated," he said. "I've got four cats inside the house. If I can't get back in a week, after awhile they might turn on each other or trash the place."