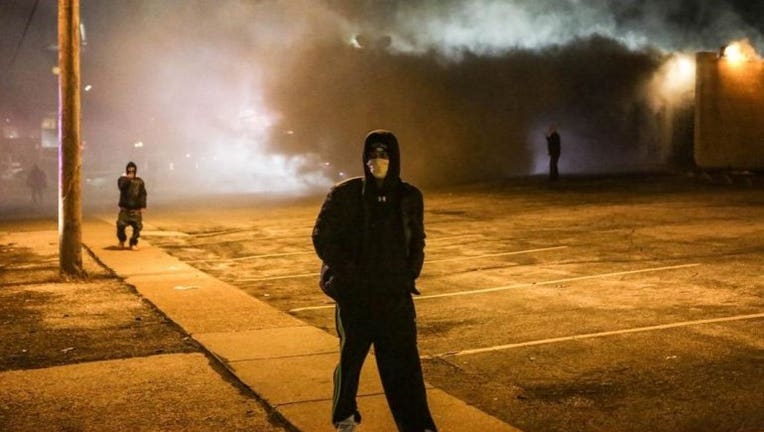 FERGUSON -- To some, they're the gut-wrenching emotional cries of a man whose stepson's life was taken.

Others say they were dangerous words that sparked a powder keg as violent protests broke out in Ferguson, Missouri last week.

But did Michael Brown's stepfather intend to incite rioting in the St. Louis suburb?

That's a question Ferguson police say they're looking into.

Brown's stepfather didn't hold back as news of a grand jury's decision not to indict Officer Darren Wilson reached Ferguson. As throngs in front of the Ferguson Police Department listened to St. Louis County Prosecuting Attorney Robert McCulloch's announcement on cell phones and radios, Louis Head stepped onto a platform above the crowd and embraced his wife, Brown's mother. He then turned to the demonstrators -- some of them shouting "F--- the police!" -- and yelled, "Burn this motherf---er down!" and "Burn this bitch down!"

His comments drew widespread attention in the aftermath of the violence as a video of his reaction, recorded just after McCulloch's announcement, circulated online.

No charges have been filed against Head, but police have interviewed people who know Head and who were with him November 24, the day a prosecutor announced that Wilson would not be indicted in the August 9 shooting, Police Chief Tom Jackson said Tuesday.

Head isn't being singled out, but he's one of the people being "looked at as part of an ongoing investigation into the activities surrounding Nov 24 pertaining to the rioting, looting and arsons," Ferguson spokesman Jeff Small said.

"I say that that's impossible," Lesley McSpadden said. "These things have been going on since August 9th, when it first happened."

Protests rocked Ferguson that day, hours after Wilson shot Brown. They grew as time passed and news of the shooting spread.

St. Louis County Police tweeted their first reports of looting less than 15 minutes later. In the hours that followed, a row of businesses on West Florissant Avenue, a major thoroughfare in the St. Louis suburb, was engulfed in flames. Police cars and vehicles at a nearby dealership were turned into fireballs. There were so many blazes that firefighters couldn't reach them all.

Police chief: 'We are pursuing those comments'

Police have not spoken to Head about his actions, but they intend to do so, Jackson said Tuesday, adding that multiple law enforcement agencies were involved in the investigation.

The police chief told TV and radio host Sean Hannity something similar Monday, but he didn't classify the probe as formal.

"We are pursuing those comments, and there's a lot of discussion going on about that right now, but I really can't get into that at this time," he said.

"We can't let all that happened in Ferguson and Dellwood and the community die. Everyone who is responsible for taking away people's property, their livelihoods, their jobs, their businesses -- every single one of them needs to be prosecuted to the fullest extent of the law," he said.

McSpadden, who was standing next to Head when he made the comments and herself told the crowd she'd never experienced anything like this, offered some context in a CNN interview last week.

After hearing the grand jury's decision, McSpadden said she felt like she'd been shot herself and her "emotions were raging." Head was angry, too, she said.

Brown family attorney Benjamin Crump has previously called Head's remarks inappropriate but asked the public not to condemn the family for being human. More recently, he told CNN to remember that Brown's mother and father have repeatedly asked protesters to remain peaceful.

He further called Head's statements "indefensible" and "not appropriate in any way."

"We don't condone people acting on emotion calling for people to do irresponsible things at all," Crump told CNN. "And so we want his family, his mother and father's message to come across louder than anybody who might be associated with them. ... And they can't control what others do. They can control what they pray for."

Others have called for Head's arrest, including Missouri Lt. Gov. Peter Kinder, who told radio host Laura Ingraham last week "that he should be arrested and charged with inciting to riot."

St. Louis County Police also said Tuesday that they were looking into Head's comments. Police will present their investigation to prosecutors once its complete, police spokesman Brian Schellman said.

But is it a case prosecutors would pursue?

"I think they'll have a hard time proving that somebody that heard him in the midst of all that noise actually went over and did an arson or committed an act of starting a fire. I think most of the people you see in the crowd are not watching CNN. They're not watching media reporting of him saying that," he told "The Situation Room." "So it is probably very few people that heard it at that time."

Also, Fuentes said, it's likely many people who'd gathered in Ferguson as the grand jury's decision was announced were already determined to act.

"I think the cause and effect of his words will be hard to prove," Fuentes said.

Hostin, a CNN legal analyst, said prosecutors should also weigh what impact charging Head could have on the community.

"I think any prosecutor that looks at a case like this, given what is going on, what has gone on in Ferguson, would never touch this case," she said. "You would have to be really tone deaf to the larger issues that are at play here to bring a case like that."

More than a week after the grand jury's decision, investigations into Brown's shooting and its aftermath are far from over.

Another part of the probe, according to law enforcement officials, is a pattern of actions by Jackson, the Ferguson police chief, who critics accuse of inflaming public reactions after Brown's shooting.

Among them: the chief's decision to release a video showing a convenience store robbery in which Michael Brown stole cigarsminutes before the fatal confrontation with Wilson, Jackson's comments to the media that Wilson would be welcomed back to the police department if a grand jury declined to bring charges, and, now, Jackson's announcement that his department was investigating Head for possibly inciting a riot.

Wilson resigned over the weekend, saying he was worried about putting Ferguson's residents and police officers at risk.

On Tuesday, the Fraternal Order of Police revealed that its members had been providing the officer with free protection since Brown was killed.

Wilson began receiving threats via phone, email and social media after the shooting, and "the (Ferguson Police) department being unwilling or unable as an entity to provide security for him, Fraternal Order of Police members from the surrounding area volunteered and have provided him with security from that time, right up until the present," said the group's executive director, Jim Pasco.

Despite Pasco's assertion that a police department is supposed to protect someone "when a person in the community is inundated with threats on his or her life," it's been widely reported that Wilson went into hiding so hastily after the Brown shooting that he left his lawn half-mowed.

In another development Tuesday, Missouri Gov. Jay Nixon announced that the National Guard will scale back operations in the area.

"The Guard has completed its duties within the city of St. Louis, and has begun to systematically reduce its presence in St. Louis County," Nixon said in a statement.

Troops are still supporting local law enforcement agencies in Ferguson and other parts of the county, he said.