KANSAS CITY -- A Missouri man with a long history of spouting anti-Semitic rhetoric is suspected of shooting to death a boy and his grandfatheroutside a Jewish community center in Kansas City and a woman at a Jewish assisted living facility nearby.

While police in Overland Park, Kansas, said they would have to investigate further to label the violence a hate crime, they said Frazier Glenn Miller is the founder and former leader of the Carolina Knights of the Ku Klux Klan and the White Patriot Party.

Both organizations operated as paramilitary groups in the 1980s, according to the Southern Poverty Law Center, which monitors hate groups.

Video from CNN affiliate KMBC showed the suspect sitting in the back of a patrol car and shouting, "Heil Hitler" after the Sunday shootings.

Miller, 73, who also goes by Frazier Glenn Cross, faces charges of premeditated first-degree murder. He is expected to appear in court Monday. 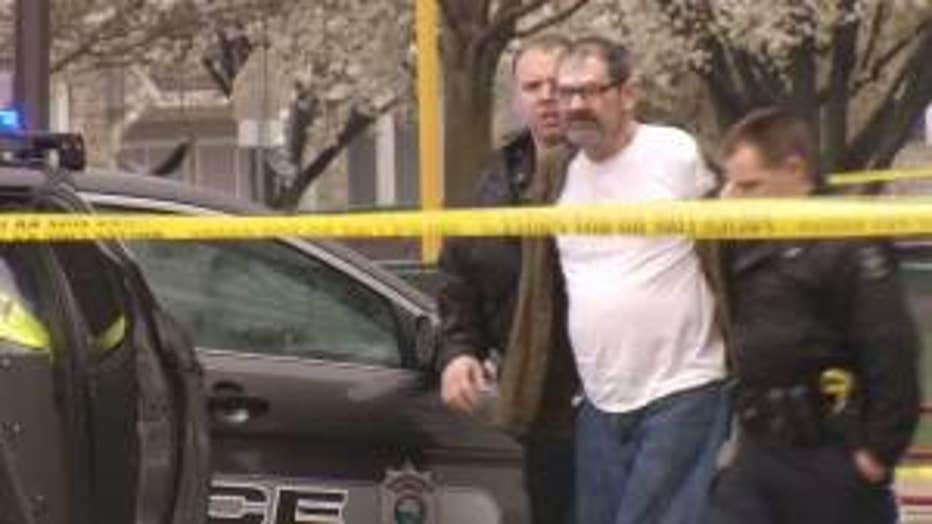 Frazier Glenn Miller is accused of shooting three Jewish people in a rampage.

The shootings took place at the Jewish Community Center of Greater Kansas City in Overland Park and at the Village Shalom Retirement Community in Leawood -- a day before the start of Passover, the major Jewish spring festival.

"The timing is terrible. The timing is awful," said Rabbi Herbert Mandl, a chaplain for the Overland Park police.

In all, the gunman shot at five people, none of whom he's believed to have known, said Overland Park Police Chief John Douglass.

Three people died; the other two were not injured.

Shortly afterward, authorities arrested the suspect at a nearby elementary school.

Douglass said police were investigating statements the man made after his arrest but declined to provide additional details.

The Anti-Defamation League said it warned last week of the increased possibility of violent attacks against community centers in the coming weeks, "which coincide both with the Passover holiday and Hitler's birthday on April 20, a day around which in the United States has historically been marked by extremist acts of violence and terrorism."

'This has left us all breathless'

Inside, the center was a hive of activity. A performance of "To Kill a Mockingbird" was about to begin, and auditions were under way for "KC Superstar," an "American Idol"-style contest for the best high school singer in the Kansas City area.

Outside, the gunman opened fire. Police said he was armed with a shotgun and may have been carrying other weapons.

Reat Griffin Underwood, 14, was coming to audition for the singing competition. His grandfather, William Lewis Corporon, was driving him. The bullets struck them in their car. Both died.

Corporon was a doctor who practiced family medicine in Oklahoma for many years before moving to Kansas City to be closer to his grandchildren.

"He cherished his family," the family said in a statement.

Reat was a high school freshman who was active in debate, theater and had "a beautiful voice," his family said.

The grandfather and grandson were Methodists, their pastor, the Rev. Adam Hamilton, told CNN on Monday.

Since the shooting, he has tried to comfort Mindy Corporon, who is William Lewis Corporon's daughter and Reat's mother.

"They are devastated but they have a real deep faith and strength of conviction," Hamilton said. "They are overwhelmed with grief. They don't believe that this was God's will. This person was doing something evil and not keeping with God's will. They do believe that their loved ones are safe in the arms of God."

He noted that this week, many Christians celebrate Jesus' resurrection after his crucifixion. "It is not just life after death," Hamilton said, "it's a promise that the worst thing is never the last thing, that evil and hate and violence do not have the last word."

At a vigil Sunday night at the United Methodist Church of the Resurrection, Mindy Corporon walked up to the podium and introduced herself as the mother and daughter of the community center victims. The gathered gasped.

"I know that they're in heaven together," she said.

"This is one of the nicest, kindest, most supportive families that we have here," he said. "This has left us all breathless."

Hamilton said services for the grandfather and grandson will be Friday.

From community center to retirement home

After the shooting started, the center went into lockdown.

"Some of these kids were taken into locker rooms and told to lay on the floor as the shots rang out," CNN affiliate KSHB reporter Lisa Benson told CNN.

Jeff Nessel, a parent, told The Kansas City Star he had just dropped his 10-year-old son off at the community center when a staff member told him to get back inside because there had been a shooting.

"We'll keep you on lockdown. You're safe here," Nessel said a staff member told him.

The gunman then drove to the retirement home, where he shot the third victim in the parking lot. She has not been identified.

Amy Rasmussen was helping with her grandmother's laundry when residents were warned by a staff member.

People "were told by one of the staff that it was a tornado warning ... and stay away from the windows," Rasmussen told the newspaper.

Miller, the suspected shooter, is a "raging anti-Semite" who has posted extensively in online forums that advocate exterminating Jews, the Southern Poverty Law Center said.

According to the SPLC, Miller founded and ran the Carolina Knights of the Ku Klux Klan in the 1980s. He was forced to shut down after the SPLC sued him for operating an illegal paramilitary organization and intimidating African-Americans.

He then formed another group, the White Patriot Party.

In the late 1980s, Miller spent three years in prison on weapons charges and for plotting the assassination of SPLC founder Morris Dees. The short sentence was a result of a plea bargain he struck with federal prosecutors. In exchange, he testified against 14 white supremacists in a sedition trial in Arkansas in 1988.

"He was reviled in white supremacist circles as a 'race traitor,' and, for a while, kept a low profile," according to an SPLC profile of him. "Now he's making a comeback with The Aryan Alternative, a racist tabloid he's been printing since 2005."