Williams was struck on July 6 at the intersection of 4th Street and the Interstate 5 northbound on-ramp in Marysville.

Surveillance video showed three vehicles drove past Williams' body after he was struck around 4:30 a.m

Police say the suspect worked as a delivery driver in the Marysville area. He originally told investigators he didn't hit anything, but after seeing damage to his truck he told police it was "probably him."

The man was booked into the Snohomish County Jail for the charges of Vehicular Homicide and Felony Hit-and-Run. His name will be made public when he appears in court.

Police said the accident happened around 4:30 a.m. at the intersection of 4th Street and the Interstate 5 northbound on-ramp in Marysville.

Police believe if they can find the drivers of the two white box trucks and light-colored passenger car, they will be one step closer to solving the case.

“This person needs to understand that he took my soulmate,” said Kimberly Williams, Scott Wiliiams’ wife.

She’s hoping that by coming forward and talking, someone will feel compelled to say something about what may have happened that early morning.

“It’s kind of hard to call it an accident when a week later, nobody’s turned themselves in. There’s no way that this person didn’t know what they did, because his injuries were very, very severe. In fact, I was told that if he would have survived he never would have woke up again,” she said.

Williams was on his way home when he was struck near the crosswalk of 4th Street in Marysville. Around the same time, recovered surveillance video shows three vehicles driving past where he would have been hit, to enter onto I-5 northbound.

“Even if you don’t think you saw anything important, please call us if you were in the area at the time of the collision,” said Marysville Police Sgt.  Jeff Franzen.

Police are hoping someone will recognize one of the vehicles and call police, or one of the drivers will come forward on their own. Police said they may unknowingly hold the missing piece.

“It could be crucial to the investigation,” said Franzen.

Crime Stoppers is offering a $1,000 cash reward if you can help Marysville Police identify the driver. Call 1-800-222-TIPS or use the P3 Tips App on your phone to submit the information anonymously.

"It was so sudden, so I never got to say goodbye," Kimberly said. "We were just short of 32 years together." 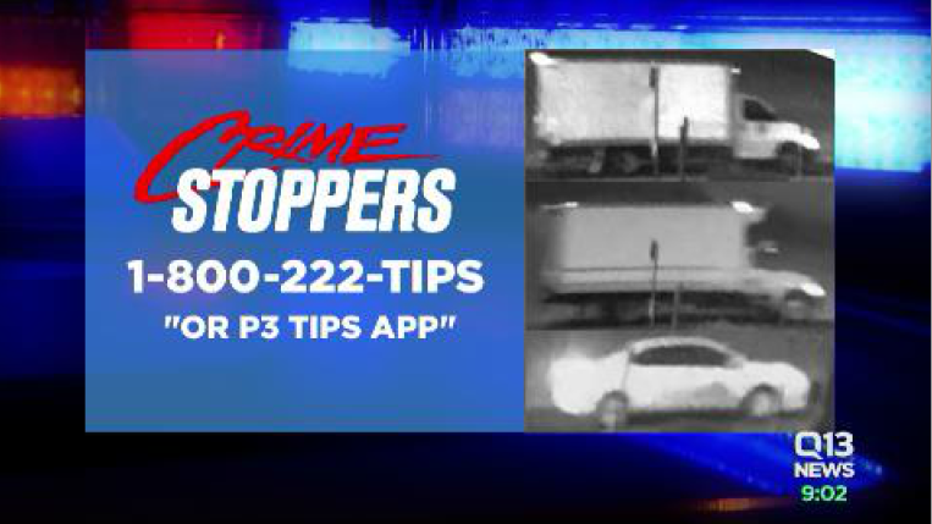