The Lights of Christmas shine bright in dark year

Organizers of a popular Christmas lights show have created a unique drive-through experience in Snohomish County.

SNOHOMISH COUNTY - Seeing kids reacting to the lights is a moment of clarity for Patrick Patterson, the chief operating officer at Warm Beach Camp and Conference Center.

There was no denying that he felt a responsibility in keeping the Lights of Christmas on, in these dark times.

"One of the funnest experiences is watching the cars just go around, and when you see the kids standing up through the sun roofs," he says

Patterson says sunroofs haven't been part of the show for the past 24 years.

"We started in 1997 and it’s typically been a walk-thru event where you come in, park, pay an admission and walk through like it’s a festival."

Driving through the event is new this year. Patterson calls this Pivot 2020. Organizers went to the drawing board over the summer to weigh their options amid a pandemic.

"We felt like the winter was gonna be a long, dark, cold winter without the Lights of Christmas."

In August, they got to work redesigning the entire event, allowing people to safely stay in their cars and enjoy the more than 1 million lights displayed throughout the camp.

"Everybody loves Christmas, whether you’re Christian or not," Patterson says.

The Lights of Christmas has been a major fundraising event for the Christian Camp and Conference Center in Stanwood since 1997, and while a lot has changed, some things stayed the same.

Patterson says the nativity scene is his favorite.

"Here you see that the meaning of but portrayed in all of its glory with the huge white figurines and the white lights reflecting on, is a very transcendent moment."

The adjustments made this year didn't come cheap, but Patterson say while the camp relies on the funds coming in, it has always been abour more than just money.

"We’re excited to be able to share the love and joy of Christ coming, and to do it with such beauty and spectacle that it draws people into the celebration."

People do have to reserve a time online to visit and it costs $20 per car. Patterson says if they could just break even this year, it would all be worth it.

They aren't the only ones concerned about making ends meet this year either. With that in mind, there are plenty of free options for families when it comes to lighting up the smiles on their kids faces. 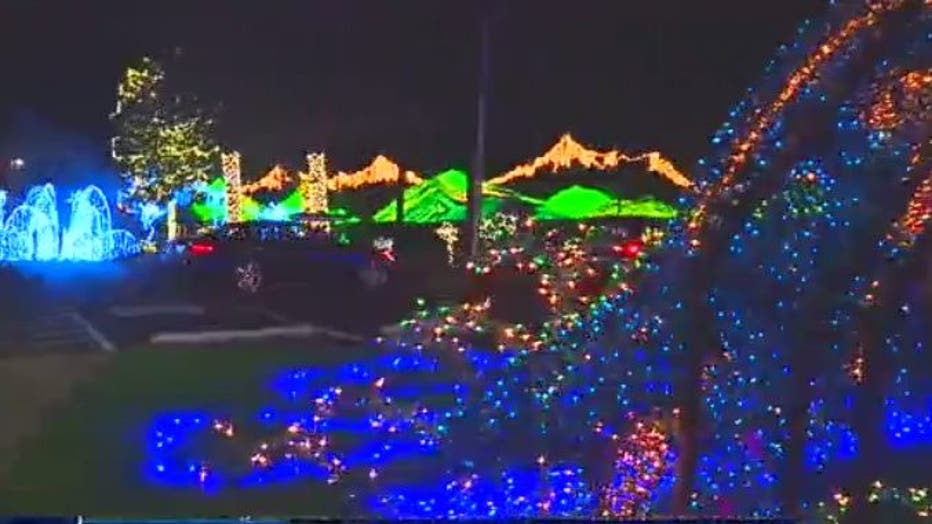 Jason Pittman has been working for 8 years on listing spectacular light displays and shows in our region.

From Vancouver, B.C., to Portland, there are more than 500 stops on his map.

"I look at it as like, if the display owner is putting themselves out there and creating a Clark Griswold-level display, that you know is there to bring joy to the public, that’s, you know, what I wanna have on the map."

Pittman says he puts a special focus on display owners who are giving back through their lights.

"Growing up, I was very poor, single parent family, on welfare pretty much all my life."

Pittman knows what it feels like to fall on dark times, and through his map, his passion for helping others shines through.

"It warms my heart."

Dennis Warren, despite harship, has been putting on a show for his Marysville community for 13 years now.

He shines his lights on helping others as he has two step-sons living with disabilities. Warren says one of them worked for the Volunteers of America.

"We decided to have a purpose for the display and have donations for the food bank."

Warren says this year it has been busier than ever and they are on track to beat last year's donations. His display won the Marysville Mayor's Choice Award and features more than 65,000 lights. It syncs up with the radio station so people can stay inside of their vehicles, enjoying the show as a family for free.

Warren says that's what it's all about.

"Forget about everything else that’s going on. This is the moment."

So, grab some non-perishable food items, rally the troops and hop in the car to safely soak up the brilliant glow of displays that have become truel labors of love for so many this year.

Whether it's a display that has been feeding the spirit of a community for 13 years, or an event that had to rethink everything after more than two decades like Warm Beach, "we felt like the opportunity to bring hope and joy to the community was worth a try and that’s why we went ahead and did it."

The spirit of Christmas is on full display throughout the Pacific Northwest just waiting to provide a bright spot in an otherwise dark year.

For more information on The Lights of Christmas, click here.

For more on the PNW Christmas lights map, or to get your home on the list next year, click here.