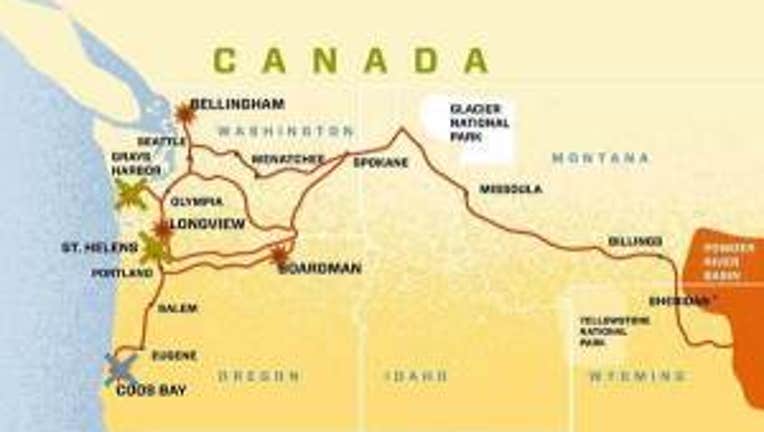 Of six coal export terminals originally proposed in the Pacific Northwest, projects at Grays Harbor and St. Helens have been withdrawn, and a project at Coos Bay is shelved. Trains would originate in the Powder River Basin. (Sierra Club/Shew Design)

SEATTLE -- The battle over plans for a series of massive coal export terminals across the Pacific Northwest took a new turn Wednesday when the energy company Kinder Morgan announced it was dropping its plan to build a $200-million facility on the Columbia River in northern Oregon.

Company officials said the site at the Port Westward industrial park near Clatskanie could not be configured optimally to handle export of up to 30 million tons of coal a year, most presumably destined for markets in Asia.

That means three of the original six proposed coal export terminals that have locked Oregon and Washington in controversy are now either shelved or off the table. Developers still are exploring or seeking permits for terminals in Boardman, Ore., Longview, Wash., and at Cherry Point near Bellingham, Wash.

Thousands of residents have signed petitions and turned out for hearings to block the plans, which would involve shipping coal from the Powder River Basin in Wyoming and Montana on long trains to the coast.

Opponents fear the toxic effects of coal dust blowing off the trains. They have also raised concerns about long traffic tie-ups in towns along the Columbia River Gorge and up and down the Pacific Coast as trains, many as long as a mile, rumble through towns.

Conservation organizations, which have turned the coal export debate into the region’s highest-profile environmental battleground, have argued that it is useless to reduce coal burning in the U.S. to slow climate change while providing fuel to coal-fired power plants in Asia.

A smaller number of trade unions and business development groups have argued in favor of the export terminals, saying they would allow the U.S. to step up its exports to China and boost jobs along the Northwest coast.

Kinder Morgan’s Port Westward project would have employed about 80 full-time staffers in addition to the 150 jobs generated during its construction.

Company spokesman Allen Fore said an 18-month-long review of the logistics of the site concluded that it would not accommodate the project that is envisioned.

“We concluded our analysis and determined that we could not find a location on that particular footprint that would be compatible with the facility that we needed to construct,” he told the Los Angeles Times.

He said the company would continue to look for an acceptable site.

“We’re a customer-driven company, and when our customers have an interest, as they currently have in a facility on the West Coast, we’re going to explore opportunities for that,” he said.

Opponents said the announcement at Wednesday’s meeting of the Port of St. Helens board of commissioners, which administers the Port Westward site, came just two days after the public voiced overwhelming opposition to the plan at a meeting of the Columbia County Planning Commission.

“If that site didn’t meet their physical constraints, they would have known that … years ago when they proposed this,” said Brett VandenHeuvel, director of the group Columbia Riverkeeper, which has helped mobilize residents against planned export terminals at Port Westward and on the river at Boardman.

“What’s new here is the overwhelming public opposition, especially locally, to this project,” he said.

Darrel Whipple, a resident of Rainier, Ore., and an organizer with the group Clean Columbia County, said more than 100 opponents filled the hearing room and spilled out into the lobby at Monday’s Planning Commission meeting, while only a handful spoke in support.

He said the county would be bisected by coal trains running along a single rail line at the rate of 12 a day — each of them longer than the town of Rainier.