A community is rallying around a local Islamic center tonight as an arson investigation is launched, hoping to find the person responsible for destroying part of the building.

UNIVERSITY PLACE, Wash. - Detectives with the Pierce County Sheriff’s Department are investigating an arson at the Islamic Center of Tacoma, the only mosque in the county.

The flames sparked Monday just after 8 p.m. while members were still inside the mosque, located in University Place.

"Any time something like this happens in our community, it makes us all feel a little sick. This is a place of worship, it’s a place where people come to find peace, solitude and hope. And to think that human beings were inside this building preparing to worship when it caught fire is a scary thing to think about," said deputy Jeffrey Papen, the public information officer for the sheriff’s office.

Fortunately, everyone escaped the burning building and no one was hurt. Witnesses told investigators someone threw an object at the mosque and ran from the fire scene, which happened to be right before the last scheduled prayer of the day at the center.

"This is the first time that we saw an intentional, deliberate act of somebody trying to burn a religious place," said Mohammad Mousa, an active member of the Islamic Center of Tacoma. "I don’t care if this is a synagogue, or a temple or a church or a mosque. I think this is a place of worship that no one should tolerate intentional act, evil act of burning a place of worship."

The Islamic Center of Tacoma is the only mosque in Pierce County, leaving so many people without a place to practice their religion. Some members gathered in the parking lot to do their daily prayers.

The sheriff’s department arson detectives are working with fire marshals to determine a cause. Investigators are also reviewing surveillance videos and witness statements. Papen said there currently is no description of a suspect.

On Oct. 19, detectives released surveillance images of a person of interest. He was seen inside a Bartell Drugs store at Bridgeport Way W and 27th St W on Oct. 11 at 7:14 p.m.

Anyone with information that leads to an arrest and charges filed is eligible for a cash reward of up to $1,000. You can remain anonymous. Call 1-800-222-TIPS or use the P3 Tips app on your smartphone. 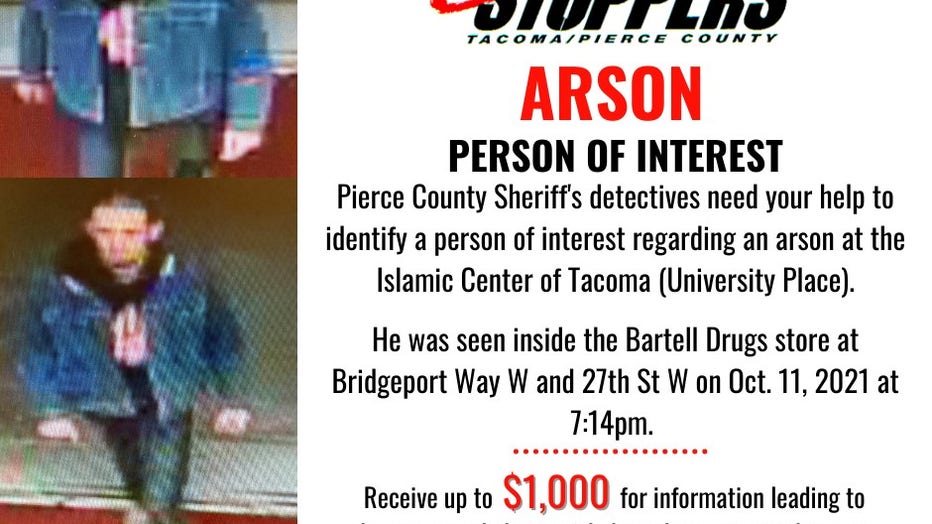 The structure of the building was damaged by the flames, deeming it unsafe for anyone to go inside.

"We don’t know when we’re going to go back, if it’s repairable or not. We still don’t know when. We haven’t been [in] there yet," said Mousa. "Living in this time, I think we have to be vigilant and we watch for each other, watch for our neighbors and our community. It’s a sign of our times, unfortunately, but the support we are getting from other religious communities and social ministries is really huge."

With no place for members to safely worship, several people from other religions are offering space in their own institutions.

"We’re here to say to each other that we care about you, we want you to be able to observe your traditions in the way that you usually do," said Bruce Kadden, retired Rabbi Emeritus of Temple Beth El in Tacoma. "We’re one community and we work together to make it a better community. Work with each other and it is important to be there when the others are suffering in whatever way."

Members of the mosque said they are so appreciative of the outpouring of community support. They said the fire may have damaged their place of peace, but not their faith.

"We all are saddened about this, but we can’t stop. If anything, it will only make us stronger," said Ali.

An online fundraiser was created to help the Islamic Center of Tacoma recover from the fire.