It started as a 911 call for a suspicious vehicle on Wednesday, around noon, in Edgewood. The Range Rover had plastic covering the windows and no plates. It had also been parked at the intersection of 20th Street and 88th Avenue East for several hours, deputies said. 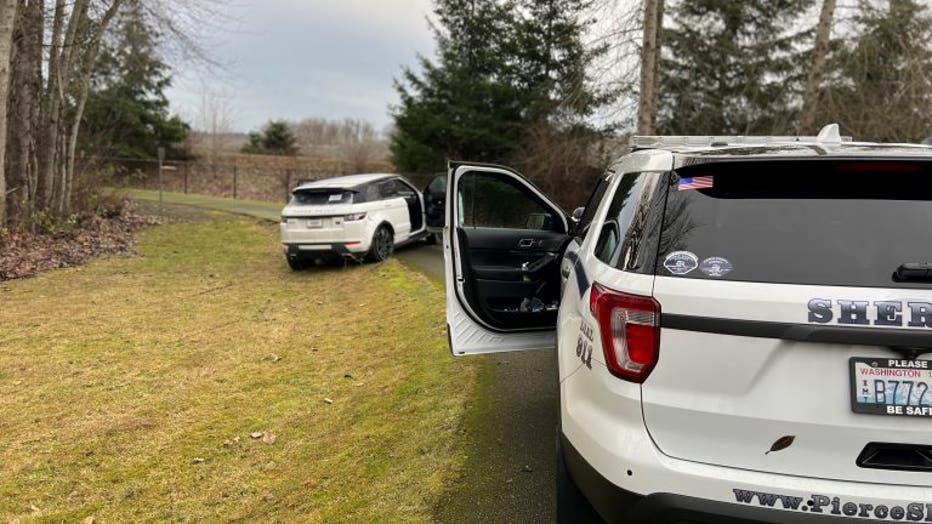 When deputies tried to wake Jackson up, he took off in the vehicle, which came back as stolen, court documents said.

Pierce County body cam footage shows a deputy jump out of the way of the car as it speeds off. Sgt. Darren Moss with the Pierce County Sheriff’s Department says the driver crashed into a Milton Police patrol car during his escape.

"We were looking for a guy who we didn’t know was armed by tried to strike one of our deputies with a vehicle," said Moss.

The suspect drove from Edgewood to the Puyallup Recreation Center. He then ditched the car and ran into the woods to hide.

According to court records, Jackson has 19 felony convictions, including several counts of stealing vehicles. He was arrested on Wednesday and faces two counts of second-degree assault, eluding, and first-degree driving with a suspended license.

Stolen cars are an issue plaguing all of Washington.

"We need more tools to do the job better," said Moss.

For more information on Pierce County Sheriff’s Department's efforts to crack down on car thefts and other crimes, click here.