Last month, a deputy responded to a report of a burglary and arrived at the scene of an empty storage unit. The victim told police that about $100,000 worth of collectibles, including many toys and figurines, were now missing.

PIERCE COUNTY, Wash. - Investigators at the Pierce County Sheriff's Department recovered approximately $100,000 worth of collectibles stolen from a South Hill storage unit after a deputy happened to notice a U-haul in a nearby parking lot.

Last month, a deputy responded to a report of a burglary and arrived at the scene of an empty storage unit. The victim told police that thousands of dollars worth of collectibles, including many toys and figurines, were missing.

After reviewing surveillance footage, employees at the storage facility provided names of possible suspects and informed deputies that a U-haul truck drove away with the stolen goods.

The next day, a deputy spotted an unlicensed car next to a U-haul while driving through a parking lot in the 17400 block of Meridian E. The back of the truck was open, revealing numerous boxes.

The victim confirmed it was his property, and the U-haul was impounded to obtain a search warrant. 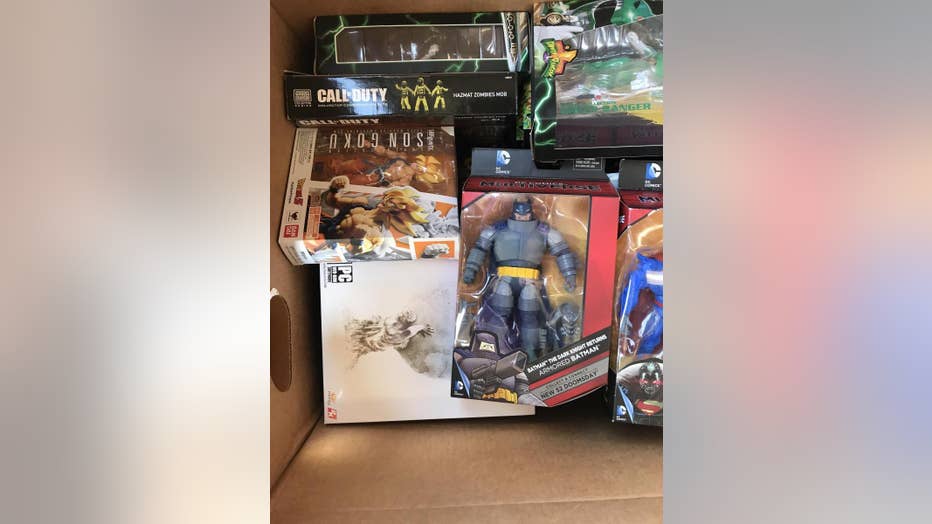 The contents of the boxes included many collectible toys and figurines.

The deputy talked to the people in the car and discovered that one of them was a suspect in the burglary. However, they were free to go as there was no probable cause for arrest, according to the Pierce County Sheriff's Department.

Investigators in the Proactive Property Crimes Unit searched the truck and found approximately half of the stolen property, along with a pistol and a pellet gun. The items were returned to the victim, though 43 of the 87 boxes are still missing.

Investigators have confirmed the identities of the suspects and await a decision from the prosecutor's office on charges.