PUYALLUP, Wash. - Thousands of trees newly planted in green spaces are up for sale in Pierce County, but none of them will be going anywhere.

"This is not buying carbon credits in some far-flung rain forest," says Ryan Mello.

Mello is the Executive Director of the Pierce Conservation District.

"This is close to home. This is right here in our backyard in Puget Sound. So, not only the carbon benefits - but here we get the people benefits too."

For organizations like his, Mello said this is completely new territory. He said they're the first conservation district in the country to try to turn their green efforts into a revenue stream for the work they're already doing.

Like in all real estate, it's all about location. And the proximity to humans means these carbon credits will cost quite a bit more than your average Brazilian rain forest carbon credit that runs about the cost of a latte ($2-3 US dollars).

The Pierce Conservation District will be charging significantly more. The rate for a single carbon credit of one ton of carbon dioxide is about $15-25. But, the proximity to people means these areas are harder to soil prep and much more challenging to maintain in the long term.

"These require a lot of maintenance over these 25 years on these urban and surban sites," said Mello. "They’re close to people [so] they can become a dumping ground, infested with weeds and invasive species. So it takes active management in these environments that we are working in -- which makes these credits more expensive." 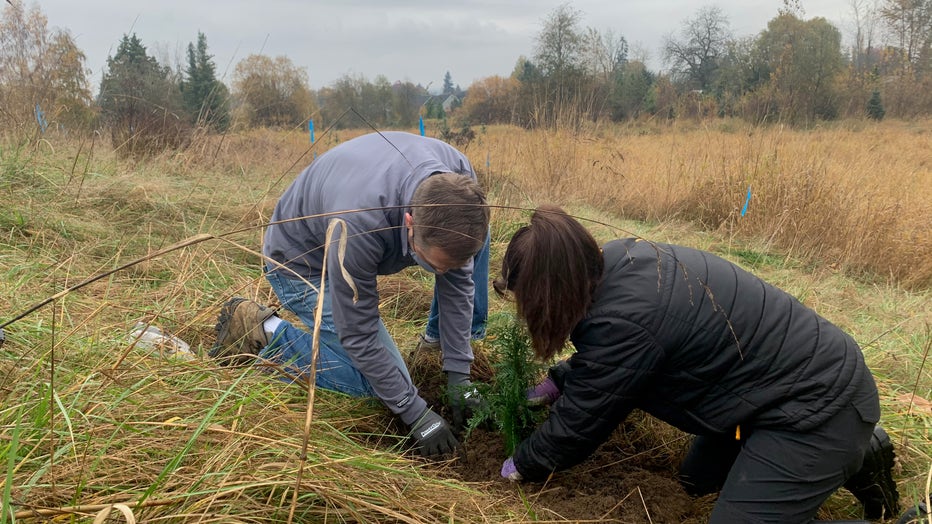 Pierce Conservation District planting one of 6,000 trees near Orting and in Puyallup in November 2020.

The Pierce Conservation District used Boeing grant money to rehabilitate 13 acres total in two parcels of land near Orting and another in Puyallup. The roughly 6,000 trees planted are expected to pull about 4,000 tons of carbon dioxide from the air -- which equals about 4,000 carbon credits.

The average American generates about 24 tons of carbon dioxide annually. Globally the average person generates only about 6 tons of CO2 annually. But, these new young trees will do more than sequester CO2 over their lifetime. They'll also shade salmon-bearing streams and clean the air and water too.

Carbon dioxide emissions happen both naturally and from human activities like running power plants or driving cars. They're on the main culprits in human-caused climate change. Businesses and individuals can purchase these carbon credits to offset their regular activities and become closer to carbon neutral.

A third party called City Forest Credits verified all the aspects of these two Pierce Conservation District projects. They specialize in doing complicated calculations to take account for the climate, soil, and specific tree types to determine how much carbon their projects will offset. To purchase some of these carbon credits you'll want to check out the website of the marketplace called South Pole.

Mello said there's been a lot of interest from conservation districts around the country to mimic this program. Pierce CD will be giving a virtual presentation at a conservation district conference in the next few months. But, not all trees are equal when it comes to capturing carbon. A leafy deciduous oak only will capture about the same amount as an evergreen like a Douglas Fir. Scientists at the Carneige Institute say that has to do with the density of the wood in deciduous trees.

And since you can't write a check directly to Mother Nature, Mello said this idea could be next best thing.

"We are really excited for businesses to buy into this program in order to offset their carbon impacts, their climate impacts and really make a difference. Right here at home in the backyards of their employees and customers."