FOX 13's Jennifer Dowling is live in Lake Stevens where an overnight windstorm caused thousands of power outages - bringing down trees and powerlines. A lot of communities in Snohomish County are waking up without power Saturday morning.

A severe weather system bringing widespread rain and strong wind gusts throughout the Puget Sound has left hundreds of thousands without power over the weekend. Crews all around the region are cleaning up debris, and some homeowners are dealing with trees that have fallen through their homes.

As of Sunday morning, Snohomish County Public Utilities District said they were able to restore power to an estimated 120,000 customers. Crews were forced to trudge through tons of trees and debris in the roads to restore fallen power lines.

In Jefferson County, utility officials say some 4,600 homes are still without power. West and South Discovery Bay is expected to be without power the rest of the day or longer.

Earlier on Saturday, PowerOutage.us reported nearly 230,000 customers without power throughout the state, most of them in Western Washington. The brunt of the damage appears to have been in the North Sound. More than 12,000 customers were without power in Jefferson County, and crews say it might take days to get everything completely restored.

According to FOX 13 Meteorologist Abby Acone, while the worst of the winds is over, we are not entirely out of the woods quite year. A wind advisory expired noon for western Snohomish County, Whidbey and Camano Islands and Port Townsend.

Later this afternoon, winds will calm down. It will stay breezy for the most part, though winds are not expected to be nearly as damaging for the second half of the day.

In Olympia, firefighters responded to a tree that fell through the roof of someone's home. They say thankfully, nobody was in the room during the incident. They asked residents in the area to avoid occupying the second story of houses until the wind subsides.

According to the Marysville Fire Department (MFD), just after 10:30 p.m. Friday night, crews responded to reports of a fallen tree that had trapped a 20-year-old woman inside of her house. When crews arrived, they had to perform CPR on her and take her to Providence Regional Medical Center. Her current condition is unknown.

The MFD says their crews responded to more than 80 emergency calls over a 10-hour period of peak severe weather.

They are encouraging people in the area to avoid traveling in the area, while crews work to clean storm debris.

Part of Highway 2 was closed overnight due to strong winds knocking trees onto the road. Crews with the Washington State Department of Transportation (WSDOT) says 25 downed trees had to be cleared before reopening the highway Saturday morning.

In Sequim, Phillip and Cynthia Vineyard sent FOX 13 photos of about six 50ft trees blown down on their property.

In Port Townsend, WSDOT announced over Twitter that their crews are working to clear the mess from the "screaming winds". They are currently using their snow plows to push fallen trees and other debris out of the roadways. 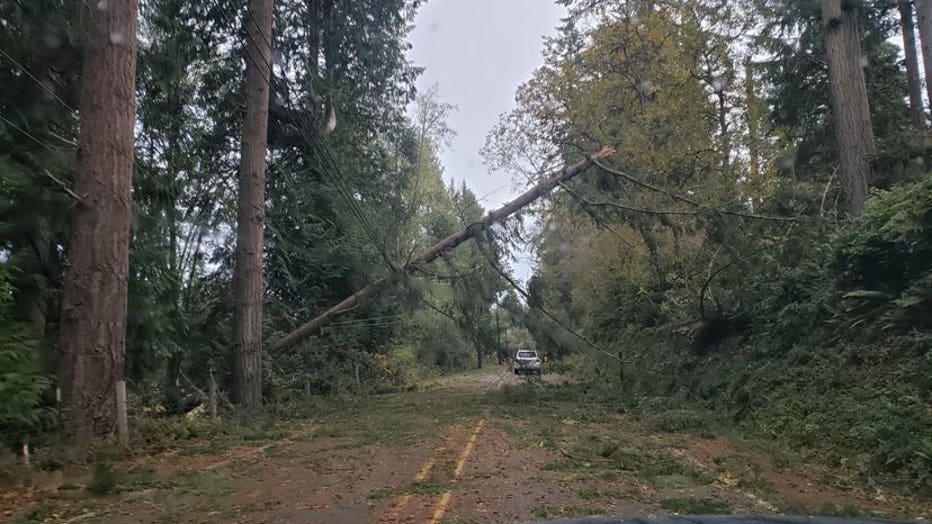 In Whidbey Island, residents there are waking up to widespread damage and power outages. An employee at FOX 13 shared this photo of a fallen down tree on a telephone wire.

This is a developing story as crews clean debris, power companies work to restore power and families recover from the storm's aftermath.

Please check back for updates.