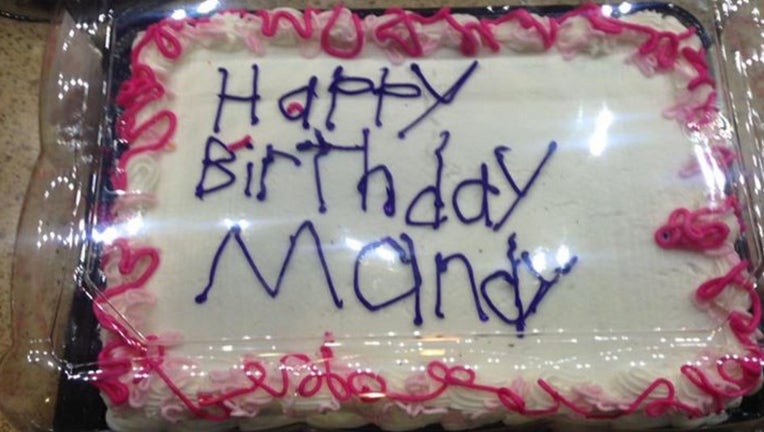 CALEDONIA, Mich. — A woman went to the grocery store to pick up a birthday cake -- and ended up with a surprise.

Lisa Aldrich said in a Facebook post that she went to a Meijer grocery store in Michigan to get a cake decorated for someone's birthday. She asked a person she assumed was a bakery employee to write a message on it.  Aldrich then took the cake without really looking at it.

“After looking, I nervously laughed and headed to check out --  it didn’t really matter to me that it looked so bad,” wrote Aldrich. She said employees offered to make her a new one, but she stuck with the one she had.

The cashiers were concerned and called a manager over. And then it all became clear.

“To my surprise, after they discussed it, one cashier put her arm on my shoulder and said ‘the girl who wrote that has autism. Thank you for smiling and thanking her -- even though she’s not supposed to write on cakes, you probably made her day,'” wrote Aldrich on Facebook.

Aldrich added: “So I guess the moral of the story is that kindness is important!”

Aldrich’s post is public and has been shared more than 34,000 times.

She later wrote on Facebook that she had received messages from than 100 people who have a loved one with autism, thanking her for sharing her story.

“Be nice. That is all,” wrote Aldrich. “I can’t believe how awesome God is that he is using this story to bless so many people! God is so, so good.”