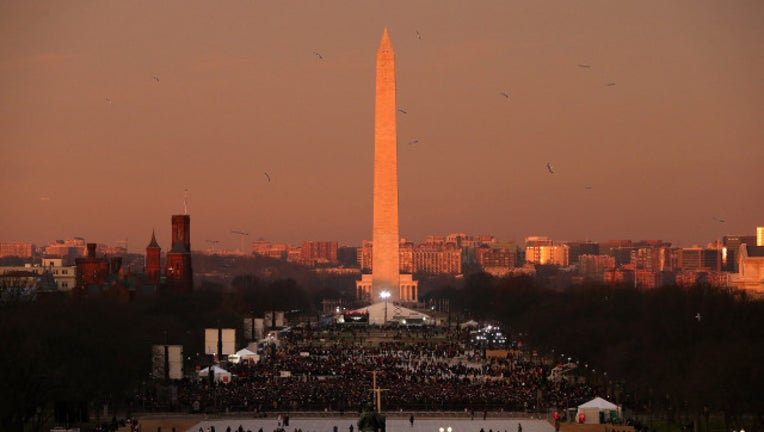 During the presidential inauguration on the West Front of the U.S. Capitol.

One of Washington's most popular sites, the 555-foot obelisk had been closed since a magnitude-5.8 earthquake in August 2011 caused more than 150 cracks in the structure.

The National Park Service and the Trust for the National Mall hosted a reopening ceremony Monday morning. The ceremony included entertainment from "American Idol" winner Candice Glover, the Boy and Girl Choristers of Washington National Cathedral Choir, the Old Guard Fife and Drum Corps and the U.S. Navy Band.

Ticketed public tours will start at 1 p.m. ET, and Monday tickets were made available at the Washington Monument Lodge on a first-come basis. Tickets for tours on future dates have been available since April 16 at the park service's reservation page,www.recreation.gov. The park service will offer extended operating hours, 9 a.m. to 10 p.m., through the end of summer.

"The construction of the Washington Monument began in 1848 when private citizens raised money to build a memorial to honor our nation's first president," Interior Secretary Sally Jewell said in an announcement on the park service website.

For the restoration project, Congress allocated $7.5 million, and philanthropist David M. Rubenstein matched those funds with a $7.5 million donation via the Trust for the National Mall.

"This enduring spirit of public-private partnerships has made it possible for visitors to once again enjoy the monument and its unmatched view of Washington, D.C.," Jewell said.

Built as a tribute to George Washington's military leadership during the American Revolution, construction of the Washington Monument was started in 1848 and completed in 1884.