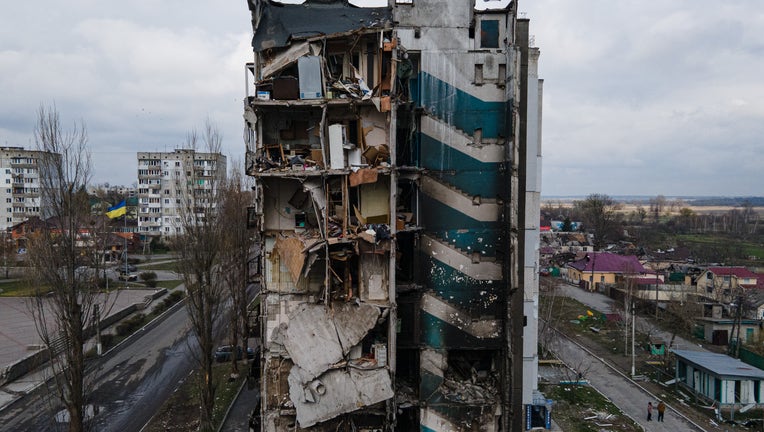 BORODIANKA, UKRAINE - APRIL 21: In this aerial view, the inside of destroyed apartments are seen from the outside on April 21, 2022 in Borodianka, Ukraine. (Photo by Alexey Furman/Getty Images)

WASHINGTON - Among the $800 million in military aid President Joe Biden announced for Ukraine this week are 120 Phoenix Ghost drones, a new weapon developed by the Air Force and fast-tracked to meet a specific need for Ukrainian forces.

But what exactly the drones do and how exactly they’ll help Ukraine in their fight against Russian aggression aren’t clear. Pentagon press secretary John Kirby declined to elaborate on the Phoenix Ghost’s capabilities, noting that it’s used "largely but not exclusively to attack targets" and it’s well-suited for the terrain in the Donbas, the industrial region in the east that the Kremlin has declared to be its new main objective.

"What we're providing is done in full consultation with the Ukrainians and they believe that these systems will be helpful to them in the fight in the Donbas. Where and when they employ them and how they employ them, of course, is going to be up to them," Kirby said.

What is the Phoenix Ghost drone?

The Phoenix Ghost was developed by the Air Force and produced by Aevex Aerospace, a U.S. company that bills itself as a leader in "full-spectrum airborne intelligence solutions."

Kirby said the drones were in the works before Russia invaded Ukraine on Feb. 24, but now development is moving "in ways that are attuned" to Ukraine’s need for unmanned aerial systems. 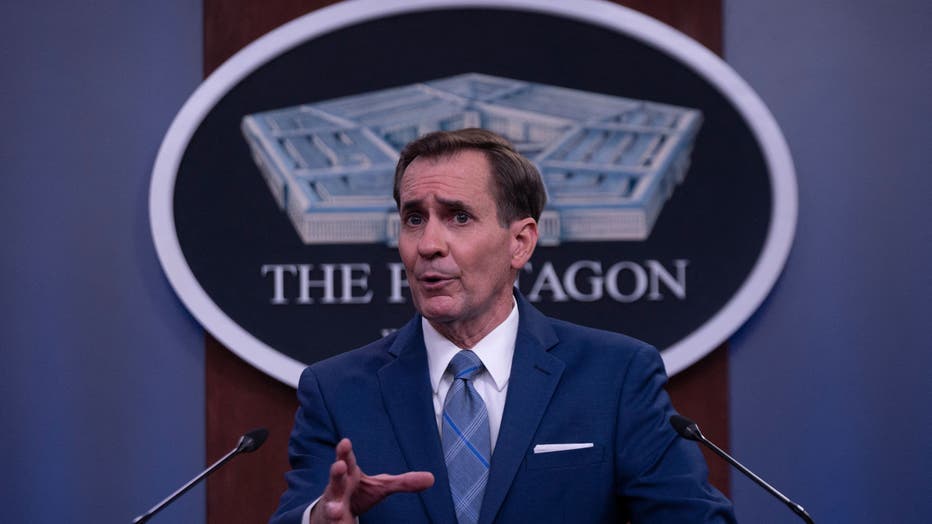 "This unmanned aerial system is designed for tactical operations," Kirby said. "In other words, largely and but not exclusively to attack targets. It, like almost all unmanned aerial systems, of course, has optics. So it can also be used to give you a sight picture of what it's seeing, of course. But its principal focus is attack."

What else is the U.S. sending to Ukraine?

The latest round of U.S. military assistance will also include 72 155mm howitzers, 144,000 artillery rounds, 72 vehicles used to tow the howitzers onto battlefields, as well as field equipment and spare parts.

The 72 howitzers are in addition to the 18 announced last week. 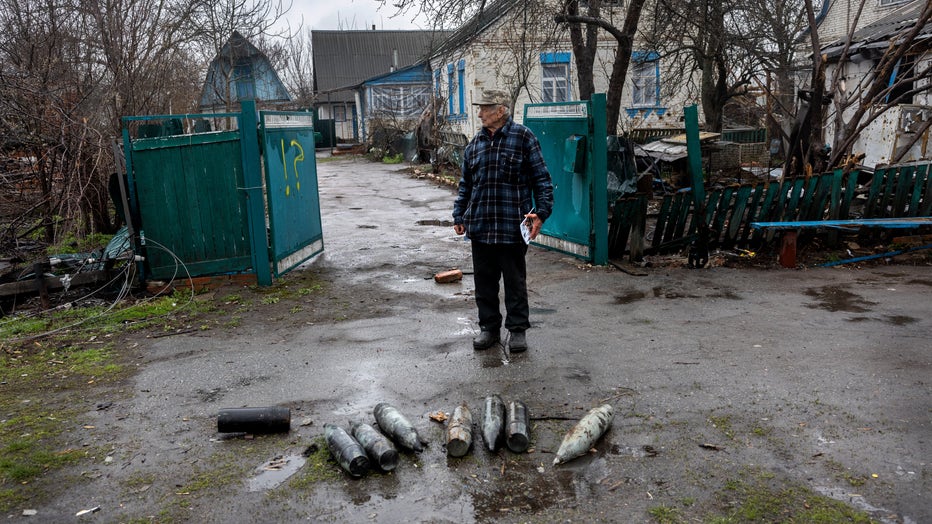 The howitzers the U.S. is sending to Ukraine will be the latest American model, known as the M777, used by the Army and the Marine Corps. Smaller and more maneuverable than the older model, the M777 can be deployed on the battlefield by heavy-lift helicopters and moved relatively quickly between positions by seven-ton trucks that also are being provided by the Pentagon.

RELATED: US to welcome Ukraine refugees but no longer through Mexico

"What makes it important is the kind of fighting that we expect in the Donbas. Because of the terrain, because it's open, because it's flat, because it's not as urban, we can expect the Russians to rely on long-range fires — artillery in particular," Kirby said. "So we know that this is going to be part of the Russians' playbook."

The relatively flat terrain is suited for what the military calls maneuver warfare — the movement of tanks and other ground forces backed by long-range guns like the 155mm howitzer.

Will foreign aid be enough?

The U.S. has provided $3.4 billion in military aid to Ukraine in the two months since Russia’s invasion. It’s an extraordinary amount for a country to which the United States has no defense treaty obligation.

Defense officials don’t believe the latest round of heavy artillery heading to Ukraine will be enough to stop Russian forces from advancing. 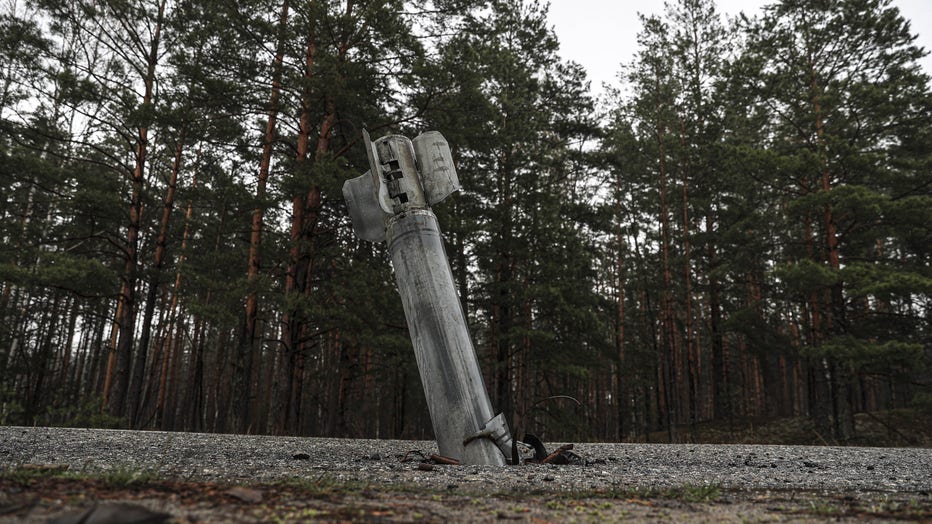 BORODIANKA, UKRAINE - APRIL 22: A military ammunition left over from the clashes is seen on the road to the village of Kukhari in the Borodyanka region of Ukraine on April 22, 2022. (Photo by Metin Aktas/Anadolu Agency via Getty Images)

Biden said he already has asked the Pentagon to get to work on additional potential military assistance.

He said this phase of Russia's invasion will be "more limited in terms of geography but not in terms of brutality." He also acknowledged that he needs Congress to approve the funds necessary to continue providing key weapons to Ukraine beyond the latest $800 million package, which he said would ensure a steady flow of arms only for the next few weeks.

U.S. officials say the Russians are trying to adjust their approach in Ukraine after early setbacks, suggesting the fight could be a long one.

After failing to take Kyiv, the capital, in the early weeks of its multipronged invasion, Russia has since narrowed its objectives by focusing on the Donbas, where Moscow-backed separatists have been fighting since 2014, and on a stretch of coastal territory along the Sea of Azov from Mariupol to the Crimean Peninsula. 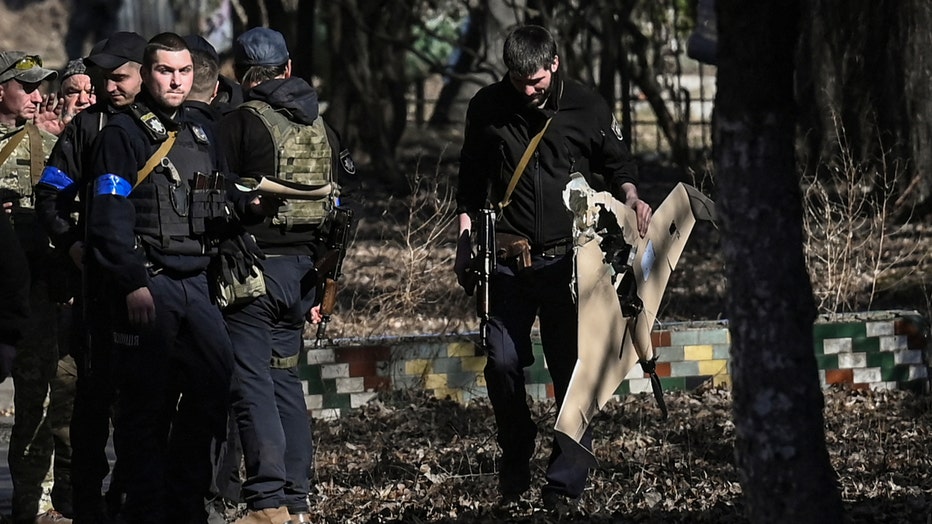 An Ukranian serviceman carries a downed Russian drone in the area of a research institute, part of Ukraine's National Academy of Science, after a strike, in northwestern Kyiv, on March 22, 2022. - (Photo by ARIS MESSINIS/AFP via Getty Images)

Moscow has warned that continued U.S. military aid to Ukraine would have "unpredictable" consequences, suggesting that Russia sees the international wave of weaponry as a growing obstacle to its invasion as well as a Western provocation.